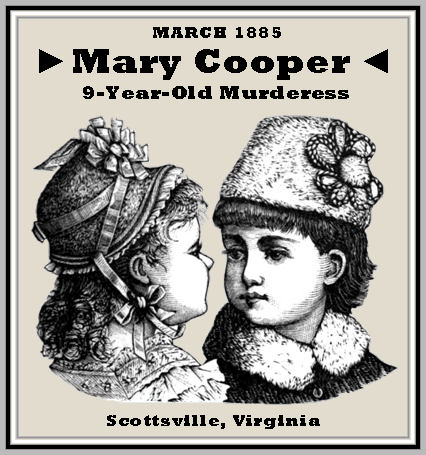 FULL TEXT: Richmond, Va., March 25.—The murder of a child reported from Scottsville some days ago has been fully confirmed by the confession Monday night of Mary Cooper, the 9-year-old girl who committed the crime. The victim was Melville Barrett, 7 years old, and a cousin of the young murderess. The two children lived with their uncle near Scottsville, in Albemarle county. The girl was suspected of the crime, but the only evidence to support the suspicion was the statement of a little 5-year-old sister of the girl.

Strong circumstantial evidence points to David Cooper, the uncle of the children, as the murderer, and he was taken to jail, though the smaller of the girls stated from the first that her sister killed the boy “for eating her egg.” The girls were to be taken to the court house Tuesday to testify before the grand jury, and in talking to Mr. Bledsoe and others Tuesday night the elder of the girls acknowledged that she killed the boy, saying she and her sister persuaded him to get on a chair ostensibly to put up a swing; that when the rope had been attached to the ceiling of the cabin she made a loop into which he was made put his head; that then she knocked the chair from under him and struck him several severe blows over the head with a shovel. 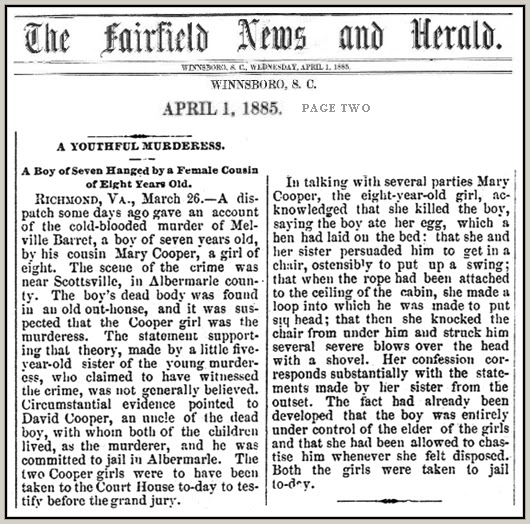