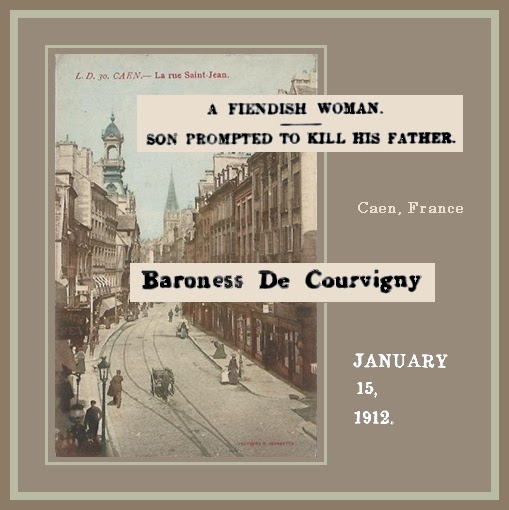 FULL TEXT: Paris, Jan. 13. – At Caen yesterday Robert De Courvigny was sentenced to 20 years' imprisonment for having killed his father, Baron De Courvigny, at the instigation of his mother. The latter was sentenced to death. The evidence given at the trial showed that the baron stopped the credit of his drunken wife, and the latter and her son, in the presence of a depraved fifteen-year old maid servant, subsequently planned to murder him. After making futile attempts to poison the baron's food the baroness plied her son with absinthe, and selected a dark avenue in which the son was to shoot his father dead. The son carried out his part of the scheme, and afterwards the baroness sought to incriminate a respectable farmer. The baroness and her son made full confessions of their guilt, but neither showed the slightest contrition.