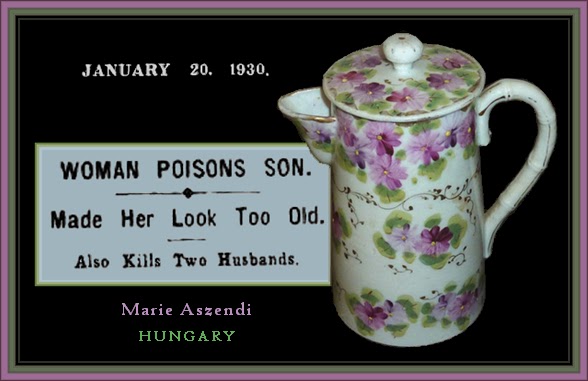 FULL TEXT: Budapest, Jan. 18. – Following the arrest of 60 widows from Tiszahurt, Nagyrev, and Skolnok on charges of having poisoned their husbands, mainly with the object of obtaining  possession of their land, Marie Aszendi has been charged with having murdered her son, because he made her look too old.

Aszendi is a popular hostess at tea parties to the well to do peasantry of Skolnock. It is alleged that her husband died of poisoning after he had thrashed her for infidelity and that her second died in a similar manner after he had threatened to divorce her.

There was a dramatic scene when the judge interrupted Aszendi’s evidence, and said angrily, “Stop lying and tell the truth. Did you know that the midwife Susan Fazekas was poisoning your son?”

Aszendi who was terrified, wavered and confessed that she did know, “We cooked a nice supper,” she said, “and put poison in it. I paid Fezekas ₤2. My son died. It took three doses of poison to kill my husband. The poison was put in his food.”

The judge asked Aszendi how much she paid for the poisoning of her husband, and she replied, “Nothing, I refused to pay.” 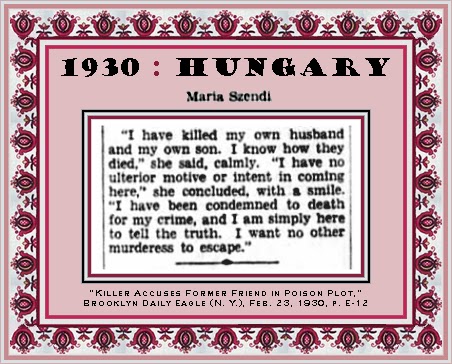 SEE ALSO: How Wives Gained Power by Mass-Murder of Husbands