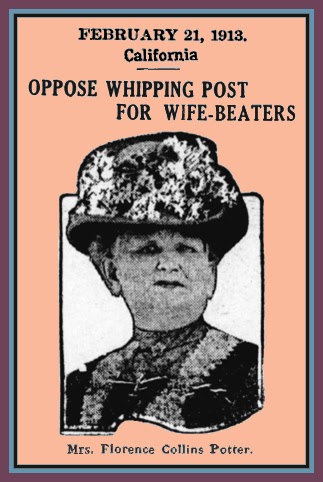 FULL TEXT: Sacramento, Feb. 2l.— The women of California don’t want the men whipped, even if those men are wifebeaters. Sen. John Cassidy of San Francisco introduced a bill recently setting up the whipping post for wife-beaters.

It provides for a whipping post in the yard of every county jail. The whip shall consist of six pieces of rawhide, one-eight of an inch thick, one-half inch wide and not less than 30 inches in length, with a handle attached 12 inches long. The bare back will receive the blows.

The sentence will be executed in the presence of 12 citizens selected by the sheriff and the numbers of lashes the court may prescribe for the offender is from five to 30.

At once the women were up in arms against the measure. Mrs. Florence Collins Potter of Los Angeles, the progressive delegate and presidential elector, said: “I have never heard the whipping post bill discussed seriously among women.”

“You can say that the women of California are a unit in their opposition to the measure.”

Evidently all the other women shared somewhat the old English plea that “wife beating ain’t no great crime,” as the late Justice McFarland remarked.

“While there are men who are brutes in their treatment of their wives, I do not believe the administration of brutal punishment would be a corrective. I am against the measure.”

Mrs. Helen Moore of the Municipal league and the Women’s Progressive league of San Francisco, expressed a similar view of disapproval as follows:

“Men seem to think that legal suasion is more powerful than moral suasion. We take an entirely different view. The establishment of the whipping post would serve to brutalize its victim even more, if that is possible.”

And so the women almost seem to stand for the ancient cynicism, “a dog, a woman and a butternut tree, the more you heat the better they be,” for they’ll have none of whipping posts, thumbscrews, racks, iron maidens or procrustean beds for wife beaters and have rejected poor Cassidy and his bill with equal fervor.