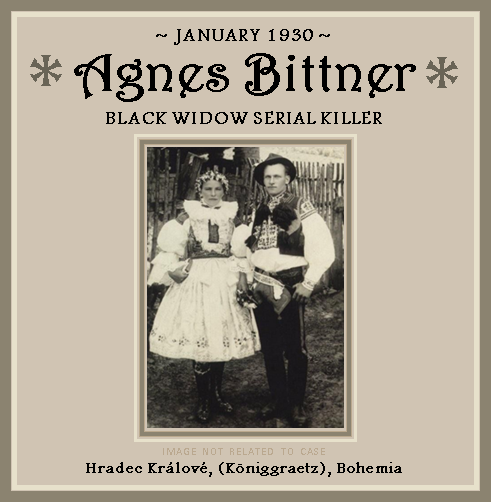 NOTE: The number of suspected murders, 7, in the brief English language reports is not confirmed by the European sources found so far. Austrian news Sources below Bittner was convicted of 3 murders and suspected of another.

FULL TEXT: Prague – Quarrel with two women friends resulted yesterday in arrest, in the village of Brobuschka [Dobruscha], Czechoslovakia, of Agnes Bittner on a charge she murdered two husbands and five lovers, committing some of the killings herself and inciting the murder of others. The woman’s former friends informed police of her alleged crimes after the quarrel.

FULL TEXT (translated from German): Yesterday evening a sensational trial verdict was delivered by the jury. In front of the jury was Agnes Bittner, now 30, from Playnitz, who was charged with three murders. Through every hearing and also the trial itself, the woman steadfastly denied guilt. Yesterday, on the final day of trial, the hostile 31-year-old tailor, Vinzenz Fisiera, once the lover of the woman, made a sensational disclosure by admitting knowledge of all the murders charged to Bittner.

In 1914, 16-year-old Agnes married the 52-year-old businessman Josef Bittner. Soon, however, she started a love affair with the landlord’s son Gottlieb Lichy and also with his sprightly 76-year-old father. She asked another lover, tailors apprentice Fisiera, to lure her husband into the forest of Dobrushka to shoot him there. When the then 17-year-old Fisiera hesitated, she called Lichy and his father and asked the two to help in the murder of her husband. Old Lichy gave her a white powder, which was arsenic, and Agnes decided to poison her husband.

~ She kills and inherits. ~

She invited lovers and friends, the 17-year-old Fisiera, the young and the old Lichy, the 34-year-old merchant Franz Vondvacek and three other men to organize a dinner party in their house. In front of her lover, she poured the white powder into her husband’s glass and Bittner died before the eyes of everyone. The investigation, in which all the participants in the Last Supper were summoned, was fruitless because everyone denied it. Agnes inherited the all the property of her murdered husband and moved into the home of old Lichy and his son.

~ She orders Lichy to commit a patricide. ~

Old Lichy sold a part of his house to the young widow and she settled in with him. But since she did not think about paying anything, the old man bickered her. Incensed by the lawsuit, the woman decided to murder old Lichy as well. She chose no one other than his son Gottlieb Lichy. Through her affair with the old woman she had made the fellow very feverish, and she soon succeeded in persuading him to a diabolical plan.

She persuaded the vagrant Anton Cap, together with the young Lichy, to ambush and murder the old man during a walk in the woods. In June 1926, schoolchildren found the dead body of the old landowner Lichy. His one son had lured the man into the forest, where he hanged him together with the tramp. Since no one suspected the son and the tramp disappeared from the area, suicide was assumed.

~ The assassin is killed. ~

The tramp reappeared. Cap reappeared half a year after the murder committed on behalf of Agnes Bittner and recovered from her larger sums of money. He also repeatedly tried to use them and finally stole from them wherever he could. Since the woman had no way out, she decided to finish off the tramp this time and to do it alone. She invited Cap to a supper and explained that she was ready to surrender to him and even marry him. Then she doused the man with large quantities of alcohol and lodged him, allegedly for a lesson of love, in a barn. When the man slept, she set the hay afire and the tramp burned alive.

~ Suicide of the betrayed bride. ~

Fisiera, who had been involved in a love affair going on with the Bittner, got married to a young girl. The careless bridegroom told his bride about the crimes of the Agnes Bittner and about his help in the murder of the husband. The young girl, who loved the boy, took everything so seriously that she committed suicide. During the investigation of the girl’s death, Agnes Bittner was subjected to a police interrogation. In the process, she let slip an imprudent statement that led to the trail of all three murders.

Agnes Bittner, a beautiful, voluptuous woman, claimed yesterday before the jury to be innocent. The chairman speaks of the death of her husband. Chairman: Did you believe in a sudden death of her husband, if you did not poison him, as you have claimed?

Defendant: He had just eaten; it was lunch time.

Court President: Did you love your husband?

Defendant: No, if you marry a 52-year old at 16, you can not love him. I was glad that he got cramps at the time and died!

The chairman asked the defendant if she also believed that old Lichy had committed suicide.

Defendant: Of course I thought so. He was madly jealous of his son, because he had me too.

Chairman: So you thought he hanged himself out of jealousy?

The chairman again asked the accused to confess at the last moment.

Agnes Bitner: Well, I did not do anything, I’m innocent.

Agnes Bittner was sentenced to death by hanging, Lichy to fifteen years and Fisiera to six years in prison. The merchant Vondracek was acquitted.

Agnes took the verdict in peace. Suddenly she jumped out and shouted, “The devil should fetch you, I’m innocent, I do not want to die!”

Then she stepped haughtily out of the courtroom.

FULL TEXT (Translated from Hungarian): Reported from Prague: Ágnes Bittner, a 33-year-old woman accused of triple murder, was arrested by the Königgraetz police. The woman married at the age of 16, but she lived a very immoral life even as a child girl. His marriage changed nothing in this life. She beat her husband, 48-year-old Joseph Bittner, with one of his lovers, Bogumil Lichy. Lichy Bogumil’s 70-year-old father, Joseph Lichy, was also a lover of the woman. This old man was hanged by Ágnes Bittner and Bogumil Lichy. A man named Mach knew about the murder and began blackmailing the woman. The murderous woman on a date, called Mach, intoxicated with a swarm of wine, then lit the barn where they met. Mach burned there. Seven men were arrested along with Agnes Bittner. Everyone knew a lover of the woman and they all knew about her sins.

FULL TEXT (translated from German): The criminal court in Koniggrätz has sentenced the three-time man-killer, Agnes Bittner, to death. At the age of sixteen the thirty-year-old married a twenty-year-old man, but soon became tired of him and began a love affair with the landlord’s son Gottlieb Lichy, and his 76-year-old father. At the same time, the seventeen-year-old tailor’s apprentice Fisiera became her lover, and from him demanded that he arrest her husband for two Lichys in her murder plans, and get from the old Lichy arsenic to poison her husband.

One evening she invited her lovers and several other friends to a feast and poured the poison into her husband’s wine glass in front of everyone.

Before the eyes of the whole society the unfortunate died of a terrible suicide death.

However, the investigation against Agnes was inconclusive, as everyone denied it. Agnes inherited the large fortune of her murdered husband and moved to the old Lichy. She bought him part of a house, but did not pay her debt and was sued by Lichy.

With her son, she now hatched a murder plan and found as assistant the tramp Anton Kact, who hanged Lichy in the woods.

In order to get him out of the way, one evening, when she was about to give herself to him, she lured him into a haystack, made him drunk, pushed him down and lit the hay. The tramp burned alive.

From the betrayed bride of the apprentice tailor Fisiera came the story of the terrible murders of Agnes Bittner. In front of the judge, Bittner rigorously blustered, but through the accusations which Fisiera threw into the defendant’s face, she was convicted of three murders and sentenced to death by hanging.

Dobruja – The Dobrujan Germans (German: Dobrudschadeutsche) were an ethnic German group, within the larger category of Black Sea Germans, for over one hundred years. German-speaking colonists entered the approximately 23,000 km² area of Dobruja around 1840 and left during the relocation of 1940. Dobruja is a historic territory on the west coast of the Black Sea. 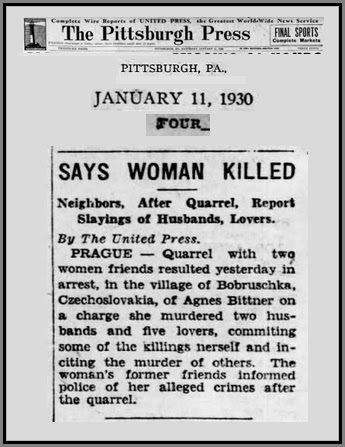 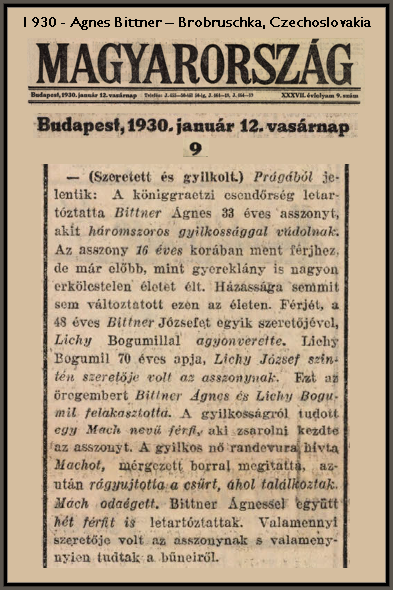 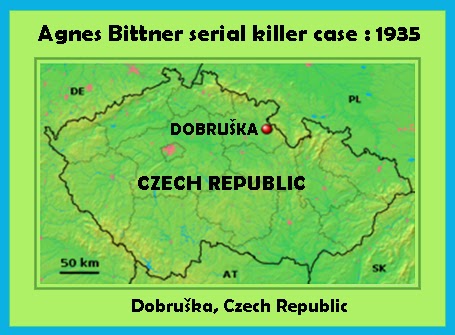 Wikipedia: Dobruška (Czech pronunciation: [ˈdobruʃka]; German: Gutenfeld) is a small town in the Hradec Králové Region of the Czech Republic. It is situated in the Orlické hory valley, about 140 km east of Prague. It has about 7,100 inhabitants. The Golden Brook (Czech: Zlatý potok) flows through the town.