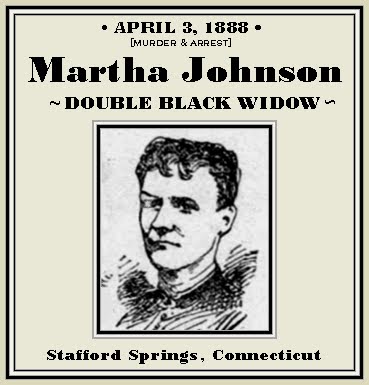 FULL TEXT (Article 1 of 4):: Stafford Springs, Conn., April 4 – Mrs. George Johnson was arrested here yesterday [Apr. 3, 1888] charged with shooting her husband while he was asleep during the night. It is stated that domestic trouble has existed between the two for some time, owing, it is said, to Johnson paying attention to other women. The couple retired early on the night of the tragedy. About midnight Johnson was awakened by a sudden shock, suffering intense pain. His wife was not beside him, but his cries for assistance brought her from the adjoining room, and also aroused some neighbors who procured medical assistance. The doctors upon examination found that Johnson had been shot, the bullet having entered just below the last rib. They probed for the ball, but were unable to extricate it. Johnson is in a very critical condition, and there is no hope for his recovery.

The authorities were notified, and Deputy Sheriff Fisk, accompanied by an excited crowd of villagers, went to the house, where Mrs. Johnson was arrested. She at first resisted all attempts to search her, but finally a twenty-two calibre revolver was found tied securely to one of her ankles. One chamber was empty. She accounted for the possession of the pistol by saying that she had recently been pursued by an unknown man and that she had obtained it to protect herself. She denied all knowledge of the shooting of her husband. She was taken to jail and arraigned in court to-day.

FULL TEXT (Article 2 of 4): Hartford. Dec. 11. – One of the most mysterious of the murder trials for which Connecticut has recently become noted opened yesterday afternoon at Tolland, a little country court house town about twenty miles from here.

Mrs. Martha Johnson, a tall, gaunt, haggard woman of 50, is on trial for the murder of her husband, George E. Johnson, in April last at Stafford Springs.

The affair was most peculiar. Johnson retired early, and awoke about 11 o’clock with severe pains in his back. He called his wife, who had not yet retired, and sent for a doctor, who found a bullet wound on the right side of the spine. Johnson did not previously know that he was shot, and had heard no report of a pistol.

His wife was suspected, and when arrested and searched the following day, a revolver with one barrel discharged was found in a flannel bag strapped to her right leg. She claimed to have bought the weapon months before as a protector when out at night. Johnson lingered in great pain until July, when he died, and his wife, who had been at liberty under $1000 bonds, was placed in Tolland jail. Last week she was arraigned and pleaded not guilty, and the trial was postponed until yesterday.

Friends have raised $500 for her defense, the larger part being contributed by Dwight Webster, foreman of the Underwood Belting company at Tolland, who is her son by a previous husband, John Webster.

It is alleged that she was responsible for the death of Webster by slow poisoning, and here are intimations that Johnson was a victim of the same kind of treatment for weeks before she shot him.

The defense will be insanity. She is a woman of strong passions, of a nagging dis position, and made Johnson’s life a burden to him by her furious temper and insane jealousy, although he was a man advanced in years and of good morals and highly respected in the community. She claims to be wholly ignorant of the shooting. But it  is understood that her temperament is such that her counsel will not risk letting her go upon the witness stand in her own defense, which is permitted under the Connecticut criminal law.

Ex-Governor Andrews, now of the superior court bench, is the trial judge.

An average jury was secured, the defense exercising all its rights to prevent men from getting into the box who would not be inclined to give the insanity plea at least a fair consideration. The local feeling is so strong, however, against Mrs. Johnson that counsel for the defense have good reason to fear that they will go into the trial heavily handicapped. When the jury was completed, an adjournment was taken until to-day. 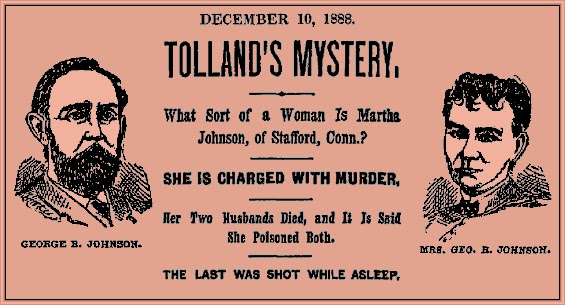 EXCERPT (Article 3 of 4) (from very long article): Stafford Springs, Conn., Dec. 9. – The trial of Mrs. George E. Johnson for the killing of her husband is set down for to-morrow and the Judge of the Superior Court says he will not postpone it on any account. It has excited the greatest in Tolland County, which is not accustomed to murders, and this interest is heightened by the promised production of testimony proving that the prisoner was a confirmed user of poison, and that she not only gave her second husband, Johnson, a good many doses of poison, but that she killed her first husband, John Webster, with poison. The defense has promised to make out a case of insanity, and take it all in all the trial promises to be very interesting.

[“Tolland’s Mystery. – What Sort of Woman Is Martha Johnson, of Stafford, Conn.? – She Is Charged With Murder. – Her Two Husbands Died, and It Is Said She Poisoned Both. – The Last Was Shot While Asleep. – Her Trial Will Begin To-Day in Stafford Springs, Tolland County, Conn. – Her Counsel Will Try To Prove Her Insane – Only One Hanging Has Taken Place in the County and That Was Away Back in 1816 – Martha Sees a Gallows in the Stare – She Apparently Has But One Friend in the World, Her Son.” The World (New York, N.Y.), Dec. 10, 1888, p. 1]

FULL TEXT (Article 4 of 4): Rockville, Conn.. Dec. 24. – Martha Johnson, who was sentenced to State prison for life on Saturday, was taken this after noon from Tolland jail to the State prison by Deputy Sheriff Fisk of Stafford. 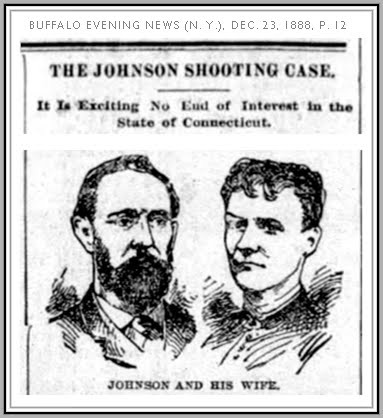