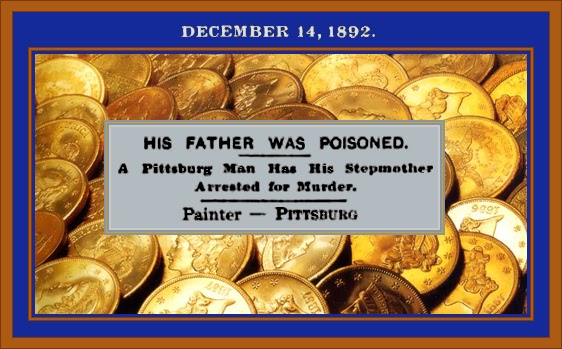 FULL TEXT (Article 1 of 5): Pittsburg, Dec. – 14. John C. Painter, of this city, went to Greensburg yesterday afternoon and made an information before Justice Loar, charging his stepmother, Mrs. Kate Painter, with the poisoning of his father, George W. Painter, who was his stepmother’s third husband. A warrant was issued and Mrs. Painter was arrested. Mr. Painter died on Nov. 12. The son claims to have conclusive evidence against his stepmother. The circumstances of his father’s death were such that an inquest was held and chemical examination was ordered, establishing the fact that he had been poisoned with strychnine.

It is known that the woman purchased a quantity of the drug two days previous to the death of her husband.

The accused woman is forty-five years of age and comely. Her first husband was killed on the railroad. Her second died of quick consumption. He had life insurance policies to the amount of $8,000. The third husband, Mr. Painter, carried $4,000 life insurance. The assessments were always paid by Mrs. Painter.

FULL TEXT (Article 2 of 5): Greensburg, Pa., Dec. 21. – The hearing in the Painter poisoning case was concluded yesterday, when Justice Loor decided to hold Mrs. Kate Painter, who is charged with the poisoning of her husband, for trial at the February term of court.

The most important testimony against the prisoner was that given by Mr. Berlin, a clerk in Baker’s drugstore, who testified that on Nov. 11, or the day before Mr. Painter died, Mrs. Painter bought fifteen grains of strychnine for the purpose, she said, of poisoning a dog that had been run over by the electric cars.

Mr. Handy, the Pittsburg chemist who analyzed the stomach, testified that he found about one grain of arsenic in the walls of the stomach, the rest having passed off in the blood, which caused death.

Mr. Carter, another commonwealth witness, said that when he entered the room where Mr. Painter lay dead he saw Mrs. Painter kneeling beside the corpse, and heard her say: “O, God, forgive me for what I have done, What will his children think of me for this.”

Mr. McWilliams. secretary of the Home Circle, of which Mr. Painter was a member, and in which he had $2,000 insurance, testified that Mrs. Painter always paid his dues and assessment and that before he died she paid dues and assessments that were not due for several days, and demanded a receipt in full.

FULL TEXT (Article 3 of 5): Greenburg, Pa., Feb. 14. – Mrs. Kate Painter, charged with the murder of her busband by poisoning him, will be arraigned for trial in the criminal court here to-morrow. It is stated here to-night that a young girl who lived in the Painter family for some time will swear to-morrow that she often purchased arsenic for Painter prior to his death, and that he said he used the drug in small doses for an ailment.

FULL TEXT (Article 4 of 5): Greenburg, Feb. 16. – A jury of intelligent men has been chosen to try the case of the commonwealth against Mrs. Kate Painter, charged with the poisoning of her husband, G. W. Painter. The woman, dressed in deep mourning, pale and nervous, sits on a chair just back of her counsel’s table. Beside her sit two young sons, McClain AND Barnhardt. In a weak, trembling voice she plead “not guilty” to the grave charge when District Attorney McCurdy at 9 o’clock this morning opened the case for the commonwealth.

He said the prosecution would show that the man died of poison, that poison, both arsenic and strychnine, was found in the dead man’s stomach, and that the defendant purchased strychnine from a druggist a few days before her husband died. The court house is crowded, and among the spectators are a great many ladies.

One strange feature in the makeup of the jury is that one of the 12 bears the same name as the dead husband of the defendant, George W. Painter. He was the twelfth juryman chosen, is a farther, had never read of the case and had no concientious scruples as to capital punishment. He was sttod aside first, but when the panel was exhausted Painter was given a seat in the jury box.

The only witnesses examined this morning were Dr. Porter, the physician who attended Painter during his illness, and Druggist Little, who filled the prescription. Both stated that there was no poison contained in the medicines.

FULL TEXT (Article 5 of 5): A verdict of not guilty was found Saturday [Feb. 18, 1893] by the jury in the case of Mrs. Painter, charged with the murder of her husband, by poison which was on trial at Greensburg, Pa., last week.