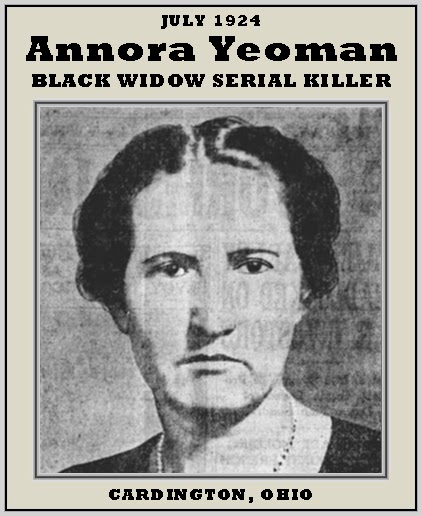 Note: Some reports have the name as “Annora,” others as “Elnora.”

Suspicion was first directed toward the women by the mysterious form of the husband’s illness. When his death followed a few weeks later, County Prosecutor Mateer ordered Coroner Caris to exhume the body and examine it for the traces of poisoning.

Vital organs taken from the body were sent to Columbus. Experts declared they found traces of poison.

A few days after her marriage to Yeoman, Prosecutor Mateer said, the woman went to the postoffice at Cardington, a village near here, and rented a postoffice box under the name of “N. B. Snyder.” Many letters were received by her under this name, evidence submitted allowed. All letters, they said, were addressed to the same man in Detroit.

FULL TEXT (Article 2 of 3): Mount Gilead, Ohio, July 17.— A grand jury investigation of Mrs. Annora Yeoman’s confession that she killed her sixth husband Lewis Yeoman, by putting poison in his coffee, was ordered today by T. M. Mateer, county prosecutor. The death of a former husband, Charles McLaughlin, and the serious illness of another will not be investigated, Mateer said, in view of “the certainty of conviction in the present case.”

FULL TEXT (Article 3 of 3): Mt. Gilead, O., Nov. 13.—A. P. Mrs. Annora Yeoman, of Cardington, charged with poisoning her sixth husband, was sentenced to serve not less than ten or more than twenty years in the woman’s reformatory at Marysville by Judge C. H. Wood here this afternoon.

Earlier in the day Mrs. Yeoman had changed her plea of not guilty to guilty of manslaughter.

At the time of Lewis B. Yeoman’s death, who was her last husband, it was rumored that Mrs. Yeoman was anxious to divorce him and remarry her fourth husband, Harry McMonigan of Detroit. 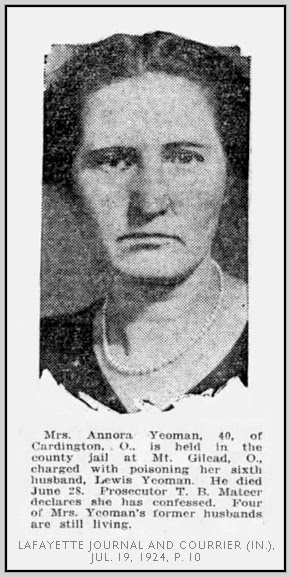 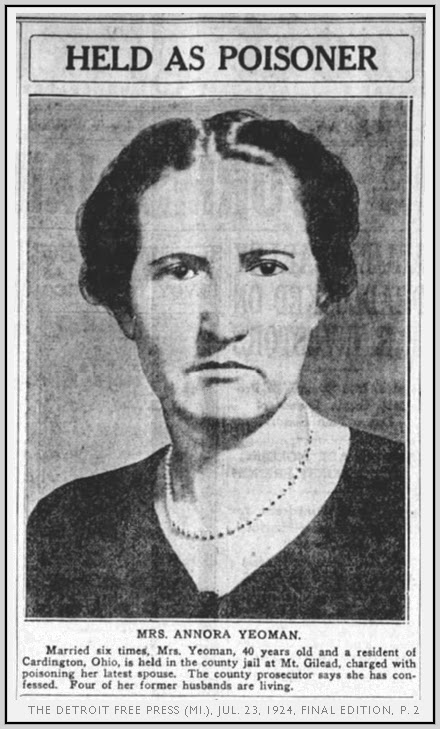 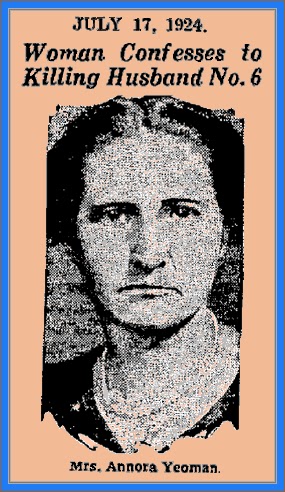