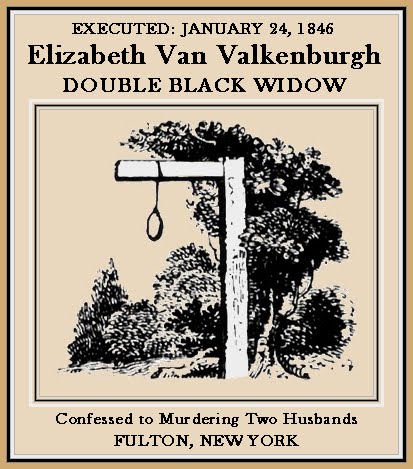 "Van Valkenburgh" is apparently the correct spelling, but the name sometimes appeears as "Valkenbugh."  The execution took place in Fulton, New York.

FULL TEXT: The Fulton Co. Democrat contains an account of the execution of this wretched woman, from which it appears that she acknowledged haying poisoned two husbands. After stating the course pursued by the Governor in this case, the statement thus proceeds: The prisoner had, previous lo the time the Sheriff received the Governor's communication, refused to confess her guilt, and maintained herself with much stoical firmness; but on learning that there was no longer any hope for her, her fortitude began  in some measure to fail, and she began to feel more sensibly her awful situation, On Thursday, the 22d instant, two days previous to her execution she made a full confession of the crime for which she was to die, and acknowledged the justice of the lenience which was shortly to end her existence, in the presence of Judge Watson, J. W. Cady, late Dis. Attorney Sheriff Thompson, Rev. James Otterson, and Rev. David Eyster. In this confession she denied having poisoned her first husband, whom it had been reported she had also murdered. But on Friday morning, the 22d, as her end rapidly approached, she made an additional confession, admitting that she had given her first husband a dose of arsenic, which, although he did not die immediately, was ultimately the cause of his death.

We are informed by those who witnessed the execution, that the scene was awful. Notwithstanding she had expressed to others that she had a hope of forgiveness from her Maker, yet, when brought from her cell, her face showed a most haggard appearance. Despair was depicted upon her countenance! Alter she was brought to the gallows, a prayer was offered up by the Rev. Mr. Hitchcock. She then spoke a few words to those present, and said if there were an drunkards or transgressors present, they must take warning by her fate; and then commenced praying to God to have mercy upon her soul. The drop was then let fall, and as the rope straightened upon her neck and just as she raised from her feet, she gave a shriek and passed from time into eternity. Tints ended the life of a lewd and wretched woman, who had sent two husbands (perhaps unprepared) into another world!

Wikipedia (Article 2 of 2): Elizabeth van Valkenburgh (July 1799 - January 24, 1846) was an early American murderer who was hanged for poisoning her husband. Elizabeth Van Valkenburgh was born in Bennington, Vermont. Her parents died when she was around 5 years old and was sent to Cambridge, New York to live, but had little education or religious upbringing.

She first married at the age of 20, moving with her husband, with whom she had four children, to Pennsylvania. After living there for six years, the family moved near to Johnstown, New York, where she remained for the next 18 years. In 1833, her first husband died, which she initially stated was due to dyspepsia and exposure. Later, she admitted that she had poisoned him by adding arsenic to his rum, because she was “provoked” by his drinking in bars. In an addendum to her confession to Van Valkenburgh’s murder, she noted that her first husband had been able to go to work the following day after being poisoned, although he suffered after effects until he died, and that she did not intend to kill him.

She married John Van Valkenburgh, with whom she had two more children, in 1834. In her confession, she stated that he was an alcoholic, that he “misused the children”, and that “we frequently quarrelled” when he was drunk Her son had offered to buy “a place” for her and the other children in the west, but John Van Valkenburgh opposed this.

She stated in her confession that “John was in a frolic for several weeks, during which time he never came home sober, nor provided anything for his family.” She managed to purchase arsenic and poison his tea, although he recovered from the first dose of poison. Several weeks later, she mixed another dose in his brandy. So gruesome was his death, however, she said that “if the deed could have been recalled, I would have done it with all my heart.”

She ran away, hid in a barn, and broke her leg in a fall from the haymow. She was captured, tried and convicted. She was sentenced to death by hanging. Many people, including ten of the jurors, petitioned Governor Silas Wright for clemency, but having studied the materials related to the crime, and despite being moved by her gender and poverty, could find no new evidence to stop the execution. She was executed on January 24, 1846. Because of her broken leg and her obesity, Van Valkenburgh was hanged in an unusual way. She was carried to the gallows in her rocking chair and was rocking away when the trap was sprung.

Pamphlet: The Confession of Elizabeth Van Valkenburgh Who Was Executed for the Murder of Her Husband John Van Valkenburgh, January 24, 1846. Comprising a History of her Life in which some Awful Disclosures are made together with The Sentence of the Judge and the Letter of the Governor refusing to interfere with the execution of the law. Copyright Secured. Printed and Sold by G. Henry and W. M. Clark, Johnstown Fulton County N.Y.