Holmes, England - Domestic Violence Was Not Tolerated by Society in 19th Century England – 1869 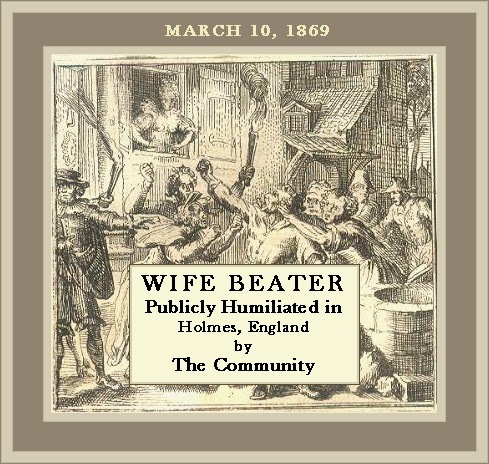 The following news report from England shows that the feminist claim that society, in that nation,  was tolerant of domestic violence – until the domestic violence industry, with its Marxist prejudices and epidemic false accusations – came to the rescue in the 1960s.

The fraudulent claim of past social tolerance of domestic violence is ubiquitous and is pushed by the most respected institutions and publications.

FULL TEXT: [Holmes, England]: The inhabitants of the pleasant suburbs of Rotborham, England, known as the Holmes, are determined that, an far as they are concerned, a high standard of domestic morality shall be maintained, as the following interesting and edifying narrative shows:

Some five or six weeks ago man employed at one of the works in the neighborhood took to himself a wife; but unfortunately, the matrimonial bliss of the couple has by no means been of an unbroken character, for the young husband has so far forgotten himself as to inflict corporal punishment upon the woman he had sworn to love and to protect. Such an early manifestation of wife beating propensities would not do for the tender-hearted resident of the Holmes, who at once formed a secret society for the purpose of avenging the wrongs of his injured wife. A singular method of punishing the erring husband was decided upon. One evening he started home after his day's labor; but be had scarcely arrived at the entrance gate of the establishment at which he was employed when he was pounced upon by a number of his fellow-workmen, and before he had recovered from his astonishment he found himself hoisted astride a rail, which, being some what narrow and by no means round, did not afford a very pleasant seat for the victim of popular indignation. But though the man's comfort was disregarded, special care was taken that he should not hurt himself by falling from the rail, several persons having undertaken the exciting task of keeping his centre of gravity in the right place. In this way the wife beater was borne in meek triumph through the principal street of the Holmes, preceded and followed by a large mob of several hundred men, women and children some bearing lighted torches, composed of pieces of tarred rope, but most of then beating cans and bottles, creating a most unearthly din in order that there might be no mistake as to the object of the demonstration, there was carried at the head of the procession, board on which was neatly painted the word," ' Wife Beater.'—

The affair caused great excitement throughout the whole neighborhood; the women, especially, working themselves up to great fury against the elevated ruffian. The procession ended its opposite the Pidgeon Core Inn, where the man was set at liberty; and to use a hackneyed phrase, he returned home “a sadder and a wiser man.”