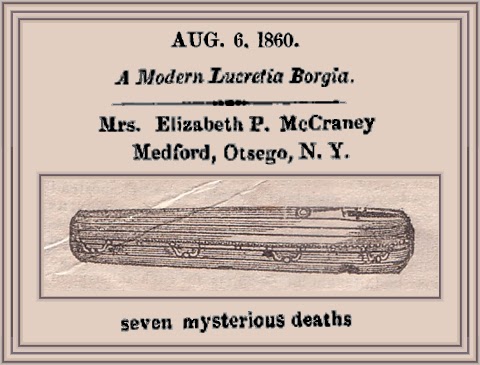 FULL TEXT: Medford, Otsego, N. Y., is horrified by the development of a poisoning case – or rather a series of poisoning cases—of an unusual character. Mrs. Elizabeth P. McCraney, the third wife of Mr. Mc. (who was also her second husband,) is accused of poisoning her husband's daughter, Huklah, a beautiful girl of 17, and now that this murder is out the people believe they shall trace no less than seven mysterious deaths to her agency, including her former husband. – She is about fifty years of age, a woman of unusually brilliant, not to say dashing appearance.

FULL TEXT: The old settlers of Wisconsin will clearly remember the sensation produced some forty years ago by a mysterious tragedy which took place at Lancaster, in Grant county, when five persons – Thomas P. Burnett, his wife, daughter, and two other residents of that village—met very singular deaths. It was the most singular tragedy ever known in the state because of the deep mystery that surrounded it, and of the death of each of the five persons mentioned.

A few days ago the Galena Gazette published a letter written in 1861, by the Hon. J. Allen Barber, of Lancaster, afterwards a member of congress from this state, in which many interesting facts were given regarding the murder. All of the five persons whose sudden deaths astounded the community died of arsenical poison. A Mrs. Elizabeth P. McCraney, a sister-in-law of Burnett, and an inmate of his house, was suspected of the murder, and was arrested, tried, but not convicted. There did not seem to be any doubt as to her guilt, but there was lacking evidence sufficient to convict her and she was acquitted. At that time the people at Lancaster did not doubt the guilt of Mrs. McCraney; and some twelve years after the murder was committed, Mr. Barber wrote the letter which was published last week for the first time and which contains facts and circumstances which point directly to Mrs. McCraney as the murderer of the Burnett family and other two residents of Lancaster.

Before Mrs. McCraney became a resident of Wisconsin, she lived in New York. Her father came to Wisconsin sometime during the thirties, and was a well known preacher, and followed his calling for more than forty years in this state. After the murder of the Burnett family, it came to light that Mrs. McCraney had poisoned two husbands and two of her little children in Otsego county, New York, where she lived before removing to this state. The normal career of this woman was remarkable. She was a woman who had reasonably good training, but her heart seemed to be set on murder, and in the course fifteen years her victims counted nine. 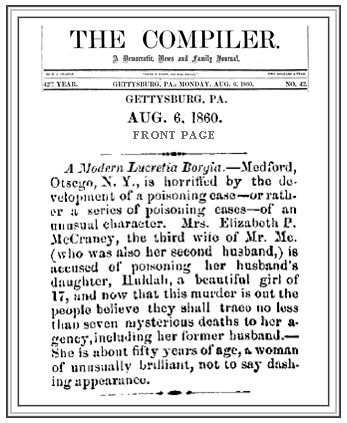