The Feminist “Experts” Lied: Judicial Condemnation of Domestic Violence in the Past - 1910 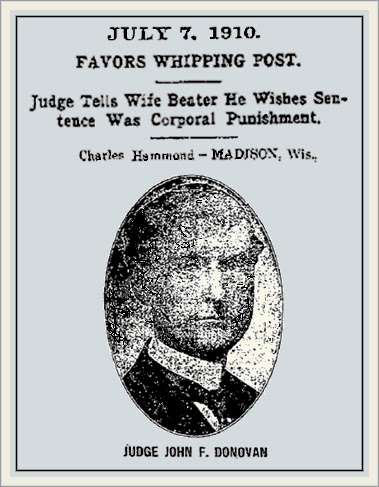 NOTE: Feminist “experts” in the fields of history, law, sociology, journalism continue to perpetuate the hoax holding that societal tolerance of domestic violence (before the Marxist feminists came to the rescue in the 1960s) was matched by judicial tolerance in the past. This fraudulent history provides the justification for the domestic violence industry with its Bill of Rights-violating practices and its incessant propagandizing utilizing faked statistics.

FULL TEXT: Madison, Wis., July 7.—-Charles Hammond received one of the heaviest sentences for wife beating ever imposed by Judge [John F.] Donovan. The judge give him six months in the Dane-county jail at hard labor and added that if it were in his power he would send Hammond to the whipping post. Hammond had blackened both of his wife’s eyes and cut her cheek in a brutal manner.

For a highly detailed treatment of the evidence disproving the feminist fraud claiming the domestic violence was accepted by society – until Marxist feminists came to the rescue in the 1960s – see: