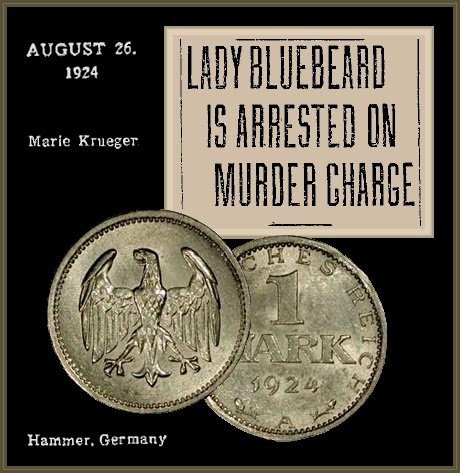 Note: Presumably the proper German spelling is “Marie Krūger.” The following articles use the spellings “Kruger” and “Krueger.”

FULL TEXT (Article 1 of 2): Berlin, Aug. 26. — A new “woman Bluebeard,” who, it is charged, maintained a regular “man trap” to which she lured victims through an extensive marriage advertisement campaign and then killed them in order to inherit their possessions, has been arrested by Berlin police. Police Commissioner Trettin, who has charge of the investigation, asserts that the evidence against her is so overwhelming and her denials so conflicting that he expects a complete confession in a short time.

The formal charge against her is that she murdered three husbands. Her name is Marie Krueger. She is 55 and lived at Hammer, a small town near Berlin. According to Trettin, her victims were old but wealthy men on whom she exerted a fatal fascination in spite of her age. Rendering them willing tools in her hands, she soon separated them from their relatives, induced them to change their wills in her favor, and then murdered them.

Her first victim, according to the police, was her own foster father, whom she married after the death of her foster mother. Her career, although she is the owner of a palatial villa, has been traced by the police to the darkest recesses of the underworld. It is the study of the untrammeled play of her one dominating passion—greed.

In her answers to the police she was sometimes very cynical. When she was arrested she was “on her way to church.”

Born as a “love child” she knew poverty in her youth until she was adopted by wealthy foster parents named Deckel at Sonnenburg. When she was 18 she ran away from home and started a reckless career at Hamburg.

At Hamburg she was soon able to buy a hotel which became one of the most notorious of the busy harbor town. When her foster mother died, however, she returned home and married her foster mother. But she continued there her reckless life.

FULL TEXT (Article 2 of  2): Berlin, Oct. 4. – Marie Kruger, for two years personal housemaid of the Kaiser [William II], is under arrest charged with having murdered her three husbands and other men to whom she was at various times engaged.

Her arrest follows a sensational career since leaving the kaiser’s employ, a series of amazing adventures having been occasioned by her posing as a countess.

Frau Kruger, from her experiences at Berlin and Potsdam, was familiar with all the nobility of Prussia, and it was an easy matter for her to ape their manners and customs. She was known to have carried her pose successfully in Austria, Switzerland and other countries.

When her desire for a roving life left her she bought a small hotel in Hamburg but fell afoul of the police and was forced to serve a term in jail.

It was upon her release she began her hectic matrimonial experiences. The first man to whom she was engaged died a few days before the wedding. Soon after his death, she married a wealthy man of advanced age.

Police have learned that Frau Kruger attempted to kill her husband by hiring a young man to overturn a boat in which they were riding, but the young man refused, and the husband escaped his fate only to die by poison shortly afterwards.

The woman also used poison to kill her second husband.

A first attempt failed and Frau Kruger, believed to have a religious mania, is known to have paid a woman to “pray for his death.”

The prayers or a stronger potion were successful.

Herr Kruger, the third husband, was murdered by having his throat cut by a razor.

FULL TEXT (translated from German): The Berlin criminal police yesterday arrested the 55-year-old widow Marie Krüger of Hammer in the district of Osternberg, on the basis of month-long research by one of their most diligent detectives, the well-known Berlin criminal commissaire Trettin.

On September 18 last year, the 73-year-old farmer Louis Kruger was found dead in his living room with his throat cut. The suicide was discovered by his wife, who came running into the room. At the same time the smoke came from the kitchen, which was aflame like a house of burning twigs.

As it was rumored in the neighborhood that the suicide was merely fictitious and that Mrs. Krüger had killed her husband, the wife was arrested. She asserted that her husband had committed suicide in a fitful derangement, and at the same time decided to set the house on fire. Since there was no evidence against her, she was released.

But as the rumors spread without cease and the Berlin prosecutor was overwhelmed with anonymous letters from the neighborhood of Mrs. Kruger, she entrusted the Criminal Commissioner Trettin with the investigation of the case.

He and Professor Strauch, who had autopsied the corpse, reconstructed the entire incident at the scene and found thereby that Mrs. Kruger's claims could not be based on truth.

Frau Kruger had stated that her husband had either cut his throat first and then lit the fire or vice versa.

The reconstruction of the facts revealed that Krüger could not possibly reach the brushwood piles [kindling] with his throat cut. The fact that he did not light the fire himself is also apparent from the autopsy, because in Kruger’s lungs traces of smoke were found.

When she was given the opportunity Frau Kruger eventually admitted watching her husband's suicide. That she murdered him she stubbornly denied. In addition to the facts, however, the circumstances speak against her: that she has found out a will, that she is the sole heir and that she answered marriage advertisements quite a long while following her husband's death, and only those of very old age.

~ Brothel hostess, hotel owner and wife of her foster father. ~

The investigations into the past life of Mrs. Krüger brought to light very interesting material: she had been at the age of 25 brothel hostess in Hamburg and had soon after bought a hotel with sixty rooms. Later, when her foster mother died, she returned to her foster father, whom she also married.

However, one year after the marriage, her foster father died.

Even then it was rumored that the much older man had not died of natural causes.

For three years she remained single and married then for the second time. Her husband became the 72-year-old farmer Zippel.

He also died five months after the wedding, allegedly of colon cancer.

Zippel, like her first husband, had made her sole heir.

Since it was rumored here too that her husband's death was not on the up and up, the widow Zippel retired to the Kölschen hamlet, where she bought a villa and lived alone for two years. After two years she married the 73-year-old farmer Louis Krüger, whose mysterious death has now exposed her earlier crimes.

FULL TEXT (translated from German): About the already briefly reported criminal case, we receive detailed communications from Berlin, in which horrible details about the crimes of the widow Kruger are revealed. Just as Landru, the French Bluebeard, attracted women, married them, and then murdered them, so too did Mrs. Krueger, with satanic treachery, be able to seduce old men whom she only followed to the altar of marriage once had she was appointed heiress. Each of her husbands died after a short time; they were in one way or another criminally eliminated by the wife. All circumstances indicate that the threefold widow wanted to increase her fortune by a new marriage and a new murder. Her arrest has put an end to this criminal activity.

The recent investigation by Berlin authorities give the following picture of the grisly affair:

The 55-year-old widow Marie Krueger from Hammer was initially arrested on suspicion of having brutally murdered her husband, the 73-year-old farmer Louis Krueger, to exploit his estate. Mrs. Kruger is also suspected of having dispatched her first two husbands, also elderly, for the same reason.

In September 1923, Mr. Krueger, a farmer, was found lying in his living room on the couch with his throat cut through. From the kitchen, smoke filled the room, which came from a house of burning twigs. Mrs. Krueger stated at that time that her husband had committed arson in a fit of mental derangement and then committed suicide.

Although there were various signs of suicide, the local authorities still believed the widow's account and set her free.

Mrs. Krueger has been married three times, oddly enough, always with men much older than herself. When the widow returned to marrying, scarcely a year after the alleged suicide of her third husband, favoring old men again, the authorities became cognizant of her once again.

The authorities in Hammer turned to the Berlin Criminal Police with a request to reopen the investigation. These efforts led to the conclusion that old Krueger must necessarily have been killed by someone else's hand. The repeated examination of the exhumed corpse revealed that farmer Krueger, having cut his throat with a knife, had to be seized by the culprit on the beard, and then held head backwards until he had completely bled out. This is evident from the fact that both the beard and the couch, on which the dead person was recovered, were completely free of traces of blood, while the stool had a large pool of blood. Other details spoke of murder.

Ms. Krueger, who was brought to the Berlin police headquarters, firmly denies having murdered her husband. But she now admits to having been present when the man cut his throat. Since the head of the severely wounded man had fallen backwards, she had, she claimed, held him. Her new statements contrast with their earlier statements. Mrs. Krueger threw the razor that killed him into the oven. The Criminal Investigation Department has conducted detailed investigation into the past life of Mrs. Krueger, which proffers the following details: She came to Hamburg in 1899 and worked as a housekeeper in various taverns. In this business, she saved so much that she could soon buy a hotel with 60 rooms.

When her foster mother died in Sonnenburg in 1915, she went there and married her old foster father Veckel. Persons who frequented their home at the time gave her the worst possible assessment. After a year-long marriage, the old man died, and at once the rumor surfaced that he had not died of natural causes. The widow, who had become the sole heir, married for the second time in 1919, to the 72-year-old farmer Zippel. He too died after five months in highly suspicious circumstances. Mrs.  Kruger was again sole heir.

In order to escape the rumors spread about her, she bought a house in a village and married old Krueger on the basis of an advertisement in 1921. He made her to the sole heir before the wedding, after he had overturned the earlier will which he had prepared in favor of his relatives.

After his reaffirmation, the female Bluebeard tried again by marriage ads in Berlin to attract new men into her net. Today there is no longer any doubt that Mrs. Krüger murdered both the old Krüger and her first two husbands.