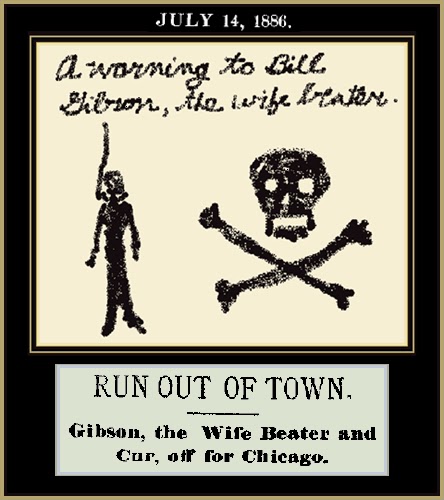 NOTE: Ever since the 1960s feminist professors, lawyers, journalists and government bureaucrats have been lying to the public about domestic violence. Among the armada of fabrications floated by these propagandists is the slanderous claim the society was tolerant of domestic violence against wives in 19th century and the first half of the 20th.  The claims are false, but are still perpetuated by such respected publishers as Westlaw to this very day. The myth of social acceptance of domestic violence against women is necessary to keep alive if the feminist social engineers wish to keep the “rule of thumb” hoax (the infamous “law” that never was a law) going.

The following is but one example of 19th century community activism showing that men treated wife beaters with the exact opposite of tolerance.

FULL TEXT [Logansport, In.] – Bill Gibson, the wife beater, has removed his carcass to other parts and the citizens of the East End rejoice accordingly. When William arose yesterday morning he found a piece of pasteboard attached to his front gate, upon which were a skull and cross-bone and a man dangling at the end of a rope. Above it all were the words, “A warning to Bill Gibson, the wife beater.” The cowardly savage was warned to leave the town in haste or make up his mind to take big medicine from “A committee of husbands in the East End.”

Gibson tore down the warning and burned it, and when the proper hour arrived took charge of a street car and drove one trip. On this trip a copy of the Journal was placed in his hands. He read the article and straightaway his courage failed him. He deserted his car, hastened to his home and excitedly told his wife that he must leave, that he had not the nerve to remain and face the music. The abused woman was rejoiced with this piece of information and told him that if he would leave, never again to return, she would give him $40 to help him on his way. He took the money, packed his grip, and in less than an hour was on his way. The miserable wretch all but frightened to death, fearful that he be caught before he left town. Chicago was his objective point the he was afraid to remain in the city until train time. He walked from this to Royal Center, where he boarded the afternoon train tor the Garden City.

The indignation caused by the publication the details of this case was universal and had Gibson remained in town over last night he would certainly have turned himself in trouble. It was one week yesterday since the cur got in his dastardly work, and those who called at the house to see Mrs. Gibson during the day yesterday, were horrified at the sight the woman’s face presented. One side presents a frightful, bruised and discolored appearance, and it will be weeks, and doubtless months before the marks of the coward’s wrath will have passed away. Constable Tattle visited the house about noon and wanted the woman to swore out an affidavit against the man, but she stated that she was afraid he would murder her if who, in any way, interfered with his departure. She was satisfied to let him go. If the villain looks to his safety, he will never again return.

The next legislature that assembles Indiana should follow in the footsteps of the little state of Delaware, and establish the whipping post for wife beaters. The only punishment to fit the crime is a public whipping – a painful humiliation. If one of Cass county’s representatives wants to place a laurel on his own brow, let him frame a bill of this kind and work through.

NOTE: The illustration is a 2012 reconstruction of the warning sign described in this 1883 article.

No, the claim that laws created by males were for the benefit of males is false. Yes, the "Rule of Thumb" myth has been proven to be a Marxist-feminist hoax, taking an ancient English common historical notation published in the 18th century and extrapolating it into unsupported claims that 18th and 20th century United States communities, courts and legislatures (laws on the books) were in agreement with the18th century historical notation (Blackstone).