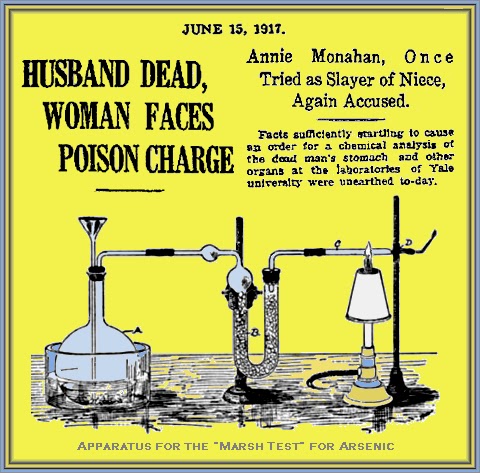 EXCERPT (Article 1 of 5): In 1912 the girl took out an insurance policy. At that time she said that she never had tuberculosis and that there was no taint of the disease in her family. A little later Mrs. Monahan tried to take out an additional policy upon her niece’s life, but was refused. [“Woman in 3 Poison Cases Accused of Killing Husband – First and Second Mates Died from Arsenic, as Did Her Niece,” New-York Tribune (N. Y.), Jun. 14, 1917, p. 16] 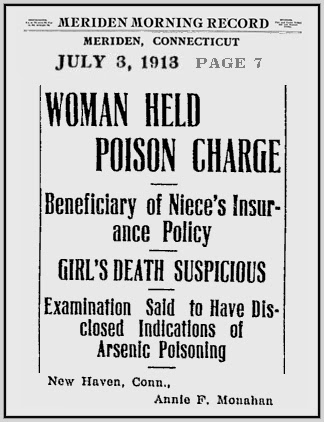 FULL TEXT (Article 2 of 5): New Haven, Conn., July 2 – Mrs. Annie F. Monahan of 43 Basset street, is held by the police to-day on a coroner’s warrant on suspicion of having caused the death of her niece, Jennie McNamee, aged 17, by poisoning. The woman flatly denies that she had anything to do with the girl’s death. The latter carried a life insurance policy of $2,000 in favor of her aunt, and this policy Mrs. Monahan has been trying to collect.

Mrs. Monahan’s first husband died in the early part of 1910. In December of that same year she married her brother-in-law, a younger brother of her late husband. with them lived the daughter of her sister, Jennie McNamee, the latter’s mother and father both being dead. The niece died on March 1, 1913. She carried a life insurance policy with Mrs. Monahan as the beneficiary. This policy Mrs. Monahan has been trying to get payment on, but the insurance companies delayed because the physicians who attended  Jennie McNamee could not definitely determine the cause of death. They had reported at the time that it seemed to be peculiar.

To-day the police state that Detective Dorman, with the coroner, had the girl’s body exhumed, and an analysis of the viscera is said to have disclosed considerable poison, apparently of an arsenical nature.

Acting upon instructions of Coroner Mix, Detective Sergeant Ward to-day arrested Mrs. Monahan. The coroner also looked into the record of the death of John P. Monahan, the first husband, and the physicians recorded this as suspicious.

Mrs. Monahan is about eight years older than her present husband. When told of the nature of the charge she flatly denied having any knowledge of the death of the niece or of her first husband other than that they came about through natural causes.

The police, in looking into Mrs. Monahan’s life found that the present husband is her third. Her first husband, Joseph Pallman, died seven years ago. Then she married Joseph Monahan, who died in 1910, and her present husband is John P. Monahan.

When the estate of the niece was before the probate court for administration, the insurance companies interested had William Higgins named for administrator. Then the companies requested the coroner to have the body exhumed. He had this done with the understanding that the companies pay the expenses. The body was taken from St. Lawrence cemetery last week after State Attorney Alling had been notified. 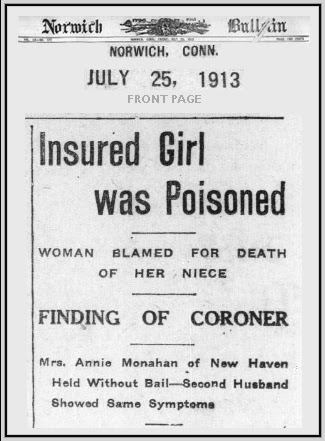 FULL TEXT (Article 3 of 5): New Haven, Conn., July 24 – Mrs. Annie F. Monahan is held criminally, responsible for the death of her niece, Miss Jennie McNamee, on March 17, last by Coroner Ell Mix, whose find ing in the case was made public this afternoon. The coroner finds that, Miss McNamee died of white arsenic poisoning, which was administered to her in small repeated doses by Mrs. Monihan, the last being given a few days before the young woman’s death.

There was insurance on Miss McNamee’s life, the coroner says, to the amount of two thousand dollars. Mrs. Monahan being named as the beneficiary,

Mrs. Monahan had been held with out bonds pending the outcome of the coroner’s investigation.

The finding states that Miss McNamee went to live with her aunt at nine years of age, following the death of her mother. During the latter part of December, 1912, she was taken ill but was able to be about the house until February of the present year, when she had to take to her bed. Her aunt had exclusive care of her giving her all medicines prescribed and food taken. Two physicians attended the young woman, and the cause of death was given as mitral regurgitation and neuritis. During her illness her stomach was much disturbed and a short time previous to her death she had paralysis of the legs and arms.

After Jennie’s death Mrs. Monahan made immediate claim on the insurance companies and the coroner says, “it being ascertained that her statements were not to be relied upon; that she had a criminal record, grave suspicions were entertained as to the cause of the death of Jennie McNamee,” which resulted in her body being exhumed last month, an autopsy performed and a chemical analysis made of certain tissues and organs. The autopsy, the coroner says, did net reveal evidence of disease sufficient to cause death, “and did demonstrate death was due to some cause acting in a subtle manner and leaving very little evidence discoverable by the naked eye.” The chemical analysis showed the presence of arsenic, “insignificant amounts.”

The coroner also says that Mrs. Monahan was at this time living with her third husband, “her second husband having deceased after about ten days’ illness, during which he had symptoms similar to those which existed during the illness of Miss McNamee, with the exception of the paralysis. He also was insured in a benevolent order, his wife being the beneficiary.

Mrs. Monahan’a second husband, the coroners’ finding continues, was a brother of her present husband, whom she married about a month after the death of her second husband. “During his illness,” says the coroner, “the physicians in attendance was Dr. Paul R. Stetson, and suspicion at that time existed that his death was not due to natural causes. He died in November, 1909, the assigned cause of death being gastritis and exhaustion.”

In his conclusion Coroner Mix “says that “Jennie McNamee’s death was due to poison introduced into her body in the form of arsenious oxide (white arsenic), and that it was introduced by small repeated doses, the last being a few days before her death.

“I am of the opinion that Jennie McNamee’s death wag caused by the poison introduced into her body as said chemical examination demonstrated; that the same was administered to her by Annie P. Monahan and that said Annie F. Monahan is criminally responsible for said death.” 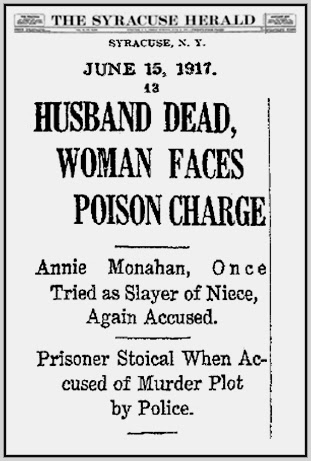 FULL TEXT (Article 4 of 5): New Haven, Conn. – A strong featured, phlegmatic woman of 45 sits in a familiar cell in the rambling old New Haven County jail. Her name is Annie F. Monahan. She is the central figure in one of the most puzzling murder mysteries that authorities of New England have ever grappled with.

Mrs. Monahan is held without bail as a result of the death, apparently by poison, of her third husband, John T. Monahan, in the New Haven hospital yesterday. He is the fourth person in her immediate family circle to die under perplexing circumstances.

Development to-day caused a tremendous stir throughout this part of Connecticut, and resulted in feverish activity by State’s Attorney Aaron Alling, Coroner Eli Mix and the local police force. Coroner Mix, on the eve of to-morrow’s formal inquest, made the first assertion of his belief that John T. Monahan was a victim of murder.

Facts sufficiently startling to cause an order for a chemical analysis of the dead man’s stomach and other organs at the laboratories of Yale university were unearthed to-day.

Coroner Mix is carefully guarding a report made to him by Medical Examiner Marvin M. Scarborough following a “preliminary autopsy.” Dr. Scarborough’s findings are said to be similar to discoveries he made in 1913 when Mrs. Monahan was accused of poisoning her niece, Jennie McNamee.

The physician reported at the time that he had found sufficient arsenic, in the girl’s body to have killed several persons. However, the authorities were forced to release Mrs. Monahan because they could not demonstrate beyond question that the arsenic had not been contained in embalming fluid which had been injected into the body. On this charge Mrs. Monahan occupied a cell for nine months.

“Before he was taken to the New Haven hospital, Monahan was so weakened that it was impossible to get an ante-mortem statement from him. The physicians who attended him at the hospital believe that he was poisoned. Professor Underhill of Yale will make chemical analysis or the stomach and other organs.”

On the question of motive, another official said:

“Monahan had been a semi-invalid for months. He was killed either for his insurance or because he was a nuisance. So far we have uncovered but one policy upon his life, and this for the, small sum of $250. But we have learned that an attempt was made recently to secure much larger policies from several companies.

Mrs. Monahan’s arrest four years ago was brought about by insurance company investigators. Her first husband and her niece all carried insurance.

Mrs. Monahan’s home at No. 137 James street has been searched by the police. The police are combing this and other cities in an effort to trace every sale of arsenic and other subtle poisons by drug stores.

While the investigation proceeds the middle-aged defendant maintains remarkable composure.

“My husband died of natural causes,” she declared to-day. “The charges do not disturb me.’”

About a month before the death of his brother John Monahan had finished a term of enlistment in the United States army, and returned to live with his brother and sister-in-law at their Hazel street home. 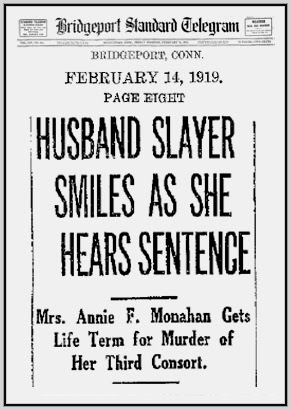 FULL TEXT (Article 5 of 5): New Haven, Feb. 13.—Smiling and apparently under less mental strain than at any time since her trial began, Mrs. Annie P. Monahan this afternoon heard Judge James H. Webb in Superior court sentence her to life imprisonment for the murder of her third husband, John P. Monahan, by administering poison. The jury found her guilty of murder in the second degree after deliberating more than three hours.

Mrs. Monahan was taken back to her cell in the New Haven jail, where she has been confined for the last twenty months, following the death of her husband on June 13, 1917. Her trial began January 28, last.

Mrs. Monahan was taken back to her cell in the New Haven jail, where she has been confined for the last twenty months, following the death of her husband on June 13, 1917. Her trial began January 28, last.

Judge Webb in his charge to the jury, denied the degrees of homicide which might be applicable in this case. He revived the testimony in the case with particular reference to the great amount of circumstantial evidence presented.

He said that proof of motive was not necessary for conviction.

The Monahan case is discussed in the following book: 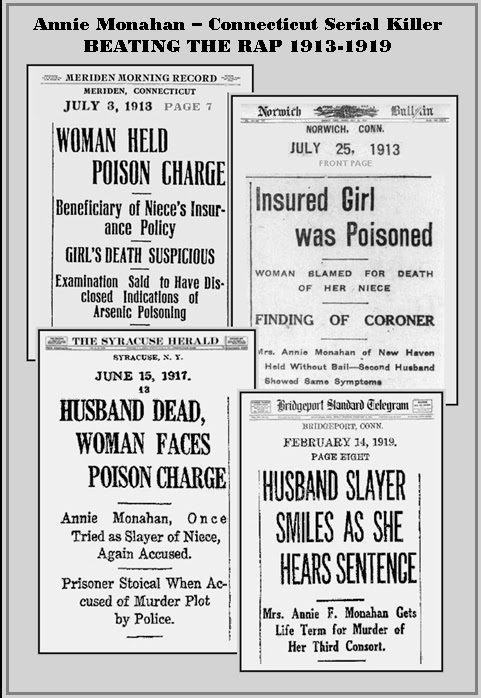 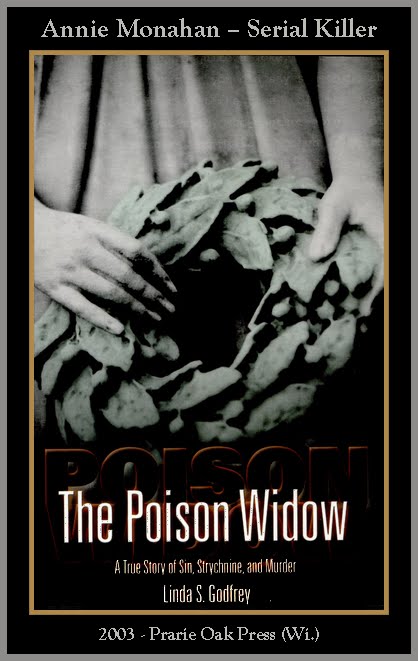