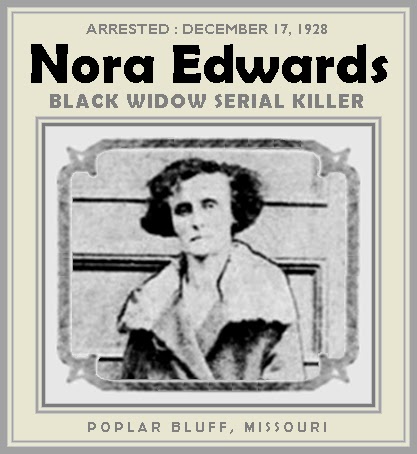 FULL TEXT (Article 1 of 3): Poplar Bluff, Mo., Dec. 18 – The word of a 37-year-old wife stood today in refutation to her husband’s contention that Mrs. J. W. Edwards administered the poison from which he is seriously ill in a St. Louis hospital.

With Mrs. Edwards’ assertion that she is innocent, authorities also had the word of her husband that she had poisoned him and killed his 15-year-old son, Forest, the same way.

Mrs. Edwards, under questioning, said Edwards carried life insurance as did her two former husbands, both of whom died under mysterious circumstances as did her daughter, Ethel May Padgett, 12.

In view of Edwards’ allegation and the deaths of her daughter and former husbands, authorities are considering exhumation of the bodies to determine if they, too, had been poisoned.

Forest, her stepson, died recently. Upon his death Edwards brought suit against a confectionery store owner, alleging the boy had been sold poisoned ice cream, but dropped the action when he became ill.

Physicians hold slight hope for his recovery. Mrs. Edwards is at liberty on $1000 bonds. 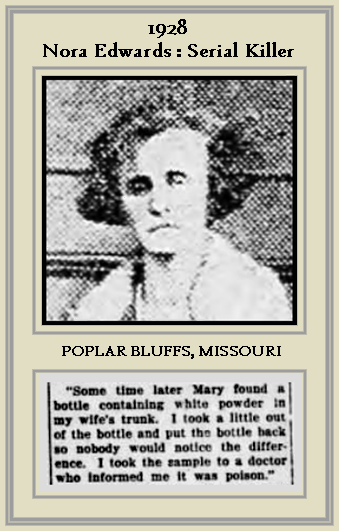 FULL TEXT (Article 3 of 3): St. Louis, Dec. 18. – James W. Edwards, a patient at the St. Louis Baptist hospital today related to a Post-Dispatch reporter the events leading to the arrest in Poplar Bluff, Mo., yesterday afternoon of his wife, Nora, on a charge of attempting to kill him with poison.

Meanwhile Prosecuting Attorney Byron Kearbey at Poplar Bluff began an investigation surrounding the deaths of her two previous husbands, Fred Padgett in 1924 and A. X. Harris on January 19, last; and of her step son, Forrest Edwards and her daughter, Ethel Mae Padgett, 12, who died April 16, 1927.

Edwards was brought here last night. Mrs. Edwards, questioned before her release on $1,000 bail denied poisoning anyone and asserted Edwards was mentally unbalanced by sickness.

Edwards, a carpenter said he met his wife at Poplar Bluff while doing some work for her last May.

“We became acquainted and went out together. We even went to church together and on July 2 we were married,” he said. “On July 24 my son, Forrest who was 15, came home sick. He died in convulsions, August 3. He had eaten an ice cream cone before he became sick and I sued the store keeper where he bought it for damages. I dropped the suit when doctors told me it was not the cone which made him sick.

“On September 24, several hours after dinner, I became violently ill and was nauseated. The next morning I started down town, but sick again and had to come home. I went to bed and became unconscious. My wife called a doctor.

“Three weeks later when the rumors were spreading my wife asked me if I would stand by her if she was arrested. I said I would. She wanted me to make an affidavit exonerating her and she went down town and got a lawyer to draw it up, but they dropped it after talking it over at the house.

“Then one day her daughter, Mildred, who is six was playing around the house and found a little box of white powder behind the piano. My 16-year-old daughter, Mary, looked at the box and saw it was labelled poison.

“Mildred grabbed the box and took it to her mother who placed it under her apron. Later Mary told me about it.

My wife said she found the box on the street and meant to show it to me. Then she threw it into the stove. There was a terrible smell when it burned.

“Some time later Mary found a bottle containing white powder in my wife’s trunk. I took a little out of the bottle back so nobody would notice the difference. I took the sample to a doctor who informed me it was poison.”

Edwards said his wife explained the presence of the bottle by saying a girl friend placed it in the trunk. She also burned the contents of this bottle, he continued.

Physicians said a complete diagnosis of Edwards’ illness would not be available for several days. 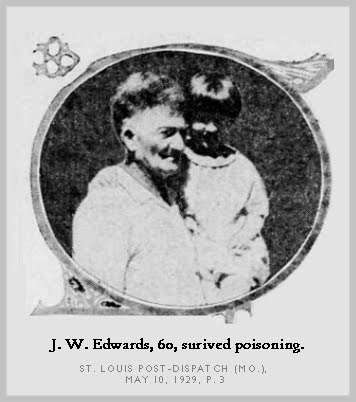 FULL TEXT (Article 3 of 3): Poplar Bluff, Mo., May 9. – Mrs. Nora Edwards, 38, was convicted by a circuit court Jury here today of attempting to kill her third husband, J. W. Edwards, 60, by administering poison to him. Her punishment was fixed at five years imprisonment.

Mrs. Edwards already was under a two-year prison sentence for burglarizing the home of a neighbor.

Her husband was stricken with a peculiar illness last fall and physicians diagnosed it as slow poisoning. He was in a St. Louis hospital for several months while physicians labored to save his life and find trace of the alleged poison. He recovered slowly, but no actual trace of poison was ever found.

Immediately upon returning home, Edwards began prosecution of his wife. He testified in her trial that she plotted against the life of Dr. J. L. Harwell after the physician, the first one called to examine him when he was stricken, expressed belief he was suffering from slow poison. The defense plea was that Mrs. Edwards was mentally deranged.

The jury returned its verdict of guilty after deliberating only fifteen minutes. Mrs. Edwards made no comment.

Seeking to show that Mrs. Nora Edwards is a moron, defense attorneys introduced a number of witnesses who testified as to her “peculiar” actions. Several physicians were called by defense to define “moron.” He described her, in that respect, as having been “possibly a spoiled child in her youth,” and having never fully progressed past the stage of childhood in some phases of development. [Note: The term “moron” was a standard medical term at this time. The description of Mrs. Edward’s character would today be termed “severe narcissistic personality disorder” along with “anti-social personality disorder.”]

The defense also contented that it was possible for Edwards to have been poisoned through intoxicating liquor or in handling paint or wall paper. Doctors testified, this would be possible, but hardly probable. They said, results from such poisoning, however, would have been chronic and not acute, as was Edwards’ case. 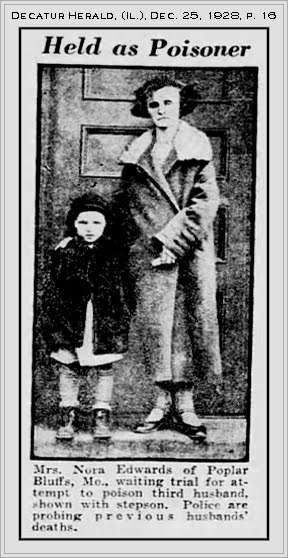 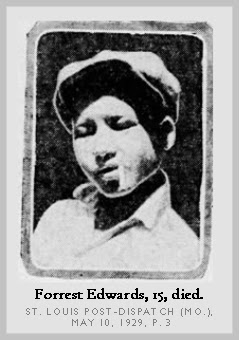 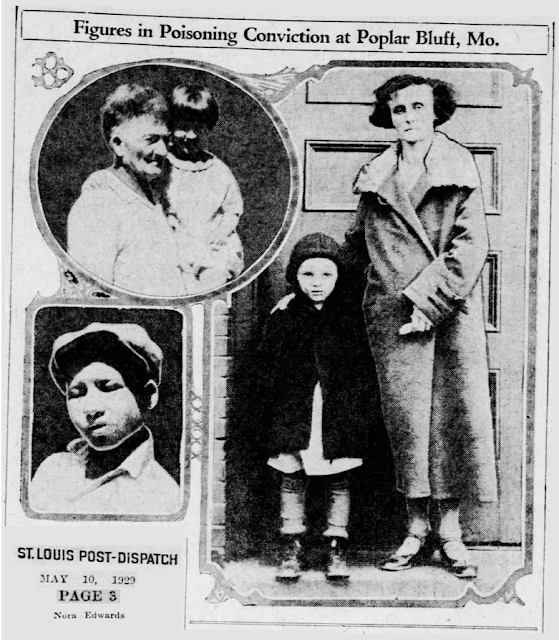 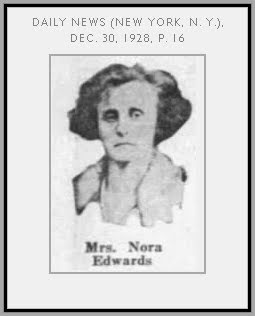