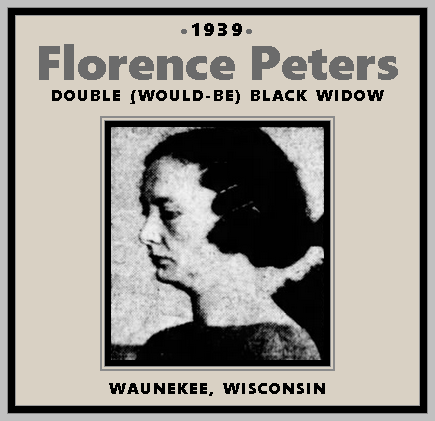 FULL TEXT: A slim, resigned Madison woman, mother of four children, confessed to officials Wednesday that eight years ago she fatally poisoned her first husband, a Waunakee man, and in July of this year twice attempted to take the life of her second husband by the same means.

In court today. Mrs. Peters, just more than average height, her dark hair sprinkled with silver, answered the judge’s questions in a low, tense voice, scarcely audible more than a few feet from the bench. Then she collapsed, and had to be carried from the room. She was revived by a physician.

Less than two score persons were scattered through the courtroom as she answered “guilty” to both charges of fatally poisoning her first husband, Henry Kessenich, Waunakee, in 1930, and attempting to poison her second, John Peters, formerly of Waunakee, in July this year.

Her confessions, made Wednesday, came after officials had received a report from Dr. F. L. Kozelka, state toxicologist, that he had found lethal doses of arsenate of lead in the body of her first husband, father of her two eldest children, Andrew, 17, and Blanche, 11. after exhumation and examination of Kessenich’s body last week.

Mrs. Peters killed her first husband because she did not love him and “wanted to be free” and by herself, she confessed Wednesday. Questioned regarding a motive for her double poisoning of Peters, she said he had been threatening to take his own life and that he “drove” her to do it.

Peters became ill after she had given him two doses of arsenic in July, hut recovered in a Madison hospital. Peters is the father of her younger two children, Catherine 4, and Billie, 10 months.

She denied that she had attempted to kill Peters because of her love for a farm hand 14 years younger than herself. He is Edward Harvey, alias Elmer Johnson. She and Harvey were arrested on Sept. 28 by police who found them living together in a Rutledge st. apartment. Harvey previously had been warned by police to leave the state. Shortly after the pair was arraigned in superior court on a morals charge. Harvey testified at the time they were engaged and were to be married when she obtained a divorce from her second husband, Peters.

“What is your plea?” Proctor asked, referring to the first degree murder charge.

“Guilty,” was the low answer, and the judge pronounced her guilty.

The second charge was read, and the judge again questioned her.

“I did poison him,” she said, explaining her actions toward her second husband, Peters, in July, “but he was after me all the time.”

“You did not want to do it?” Proctor asked.

“But you are guilty?” he persisted.

“Yes,” she said, tonelessly, strain evident in her whole bearing.

At Walstead’s request she walked slowly to the witness chair, for examination, and leaned her headwearily on her right hand. Waistead opened his mouth to speak, but stopped abruptly, as the woman slumped down in the hard chair and collapsed because of the ordeal.

Sharply, Proctor called for assistance for her, and she was helped down the steps by Mrs. Guynes, walked a few steps, and her legs gave way.

The woman was carried to judge’s chambers by Lloyd Paust, assistant district attorney, Inspector Leo Kinney, and Melvin Bailey, court bailiff, where she was placed under the care of Dr. L. M. Holmgren, hurriedly called to the building.

Revived, she delivered a statement to a court reporter almost identical to her Wednesday confession. Unnerved by the ordeal, she was forced to rest a number of times before it was completed.

Dr. Kozelka. later placed on the stand by Walstead, identified 10 exhibits, results of his findings for the court. All were placed on record.

A second witness, George Manthey, Waunakec constable, identified a green and white bag of arsenate of lead, which he found during the latest investigation, on the Andrew Williamson farm in town of Westport, scene of the Peters poisonings.

Her dramatic confessions Wednesday were made after several hours of grilling in the district attorney’s office, and later in police headquarters, by T. Beggs, Walstead, and Mrs. Guynes.

Following questioning by Beggs and Walstead, Mrs. Guynes began to quiz her, and obtained the story that she had placed “some white powder” in Kessenich’s tea at a meal, early in September, 1929.

Two days later, Kessenich became ill, and was taken to a Madison hospital, where he died.

Since his death, rumors circulated through Waunakee that Kessenich’s end was brought about by something other than the stated case, pneumonia. At the time he died physicians asked to conduct an autopsy, but the widow and members of his own family refused permission.

When Peters became ill in July, rumors again started, and increased when Mrs. Peters and Harvey were found together. Relatives of Kessenich then asked the district attorney to act, with the exhumation and examination of the body resulting Saturday.

Harvey caused ill feeling on the town of Westport farm where the Peters family lived this summer, when he came there for work, authorities said. When Peters became ill Harvey was brought in for questioning, charged with resisting a Waunakee officer.

When Peters recovered, Harvey was released on promise to leave the stale. Mrs. Peters then disappeared, and was found living with Harvey here. Both were ar-lascivious conduct in September. Judge Proctor withheld sentence to permit authorities to investigate thoroughly the Kessenich and Peters cases, with exhumation of Kessenich’s body and Mrs. Peters’ confessions following.

Held in county jail on the morals charge, Harvey has no connection with either case, Walstead said today, although he was told of them by Mrs. Peters. 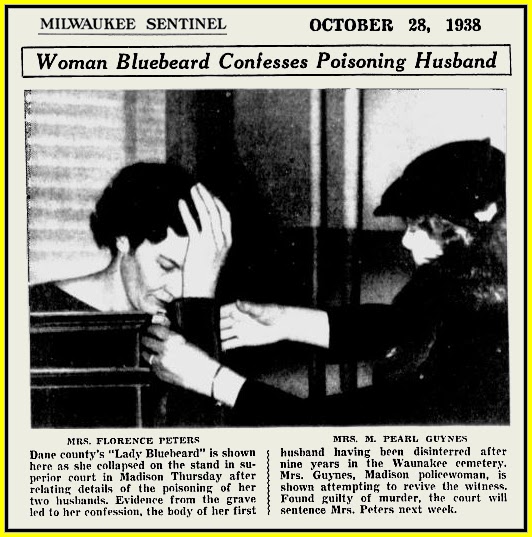 Following her confession to the Kessenich poisoning Wednesday, Walstead and Mrs. Guynes interrogated Mrs. Peters to clarify her motive for her action nine years ago.

“Why did you give it to him?” Walstead said, grilling her on the motive for the Kessenich poisoning.

“Because I wanted to be free, just as I told you, that I wanted to go by myself,” Mrs. Peters said.

“Why didn’t you divorce him?” Walstead queried further.

“Because he wouldn’t give me a divorce,” she said.

“Your married life had been unhappy with him, had it?” Walstead wanted to know.

“How much did you put in the tea?” the assistant prosecutor Slim Dick Post, asked her.

“Not a quarter of a teaspoonful,” was the answer.

“Did you once give it to him more than once?” Walstead continued.

“No, sir,” she answered, Walstead said, and went on to tell him that Kessenich became ill the second day, during the middle of August, 1929.

Dr. Kozelka’s report submitted on the Kessenich exhumation stated that the “high concentration of arsenic in the hair roots indicates that the individual was exposed to arsenic shortly before death.” The arsenic found in the tissues, he maintained, was not a contamination from embalming fluid or other sources, such as the ground or casket.

Kessenich’s death had been listed as caused by pneumonia, but relatives told Walstead he had vomited during his two weeks’ illness and exhibited symptoms of poisoning.

Married to Peters in 1933, three years after Kessenich’s death, Mrs. Peters moved with him to the Williamson farm, in the town of Westport, near Waunakee, where she twice attempted to poison Peters in July, Walstead said.

In the milk house on the farm, the woman said she said she obtained a small amount of arsenic from a package, and gave two small doses in her husband’s milk, he added.

“How did you give it to him?” Walstead asked Mrs. Peters.

“I don’t remember,” she said, but continued, “I just gave him a small dose in some milk, that’s all.”

“That’s in John Peters’ milk?” was the next question.

“Yes,” was the short answer.

She explained she gave the two doses to Peters “before he went to bed with his medicine,” and said he was sick a week before she gave it to him, Walstead pointed out, and insisted Peters “drove” her to do “something” for his sickness at the time.

The two doses of the poison, given two or three days apart, failed to do more than make Peters vomit, Walstead said, and he eventually recovered.

The second confession came with dramatic suddenness Wednesday after Walstead produced a package of arsonate from the farm and asked Mrs. Peters whether that was the one.

Crying, she confessed she had used the poison.

John Peters, poisoned twice by his wife, Florence, in July, has been living in the couple’s apartment, 1335 Rutledge st., during the investigation. Policewoman Pearl Guynes disclosed today.

With Peters are three of his wife’s four children, Blanche, 11, Catherine, 4, and Billie, 10 months.

Since Mrs. Peters’ arrest and confinement in county jail, the city relief department has furnished a housekeeper for the children, Mrs. Guynes said. The fourth child, Andrew, 17, is living with an uncle on a farm near Waunakee.

In a statement made today following the trial, Mrs. Guynes was commended highly by Elliott N. Walstead, assistant district attorney and was termed by him as the person who “was instrumental in securing both confessions from Mrs. Peters.” 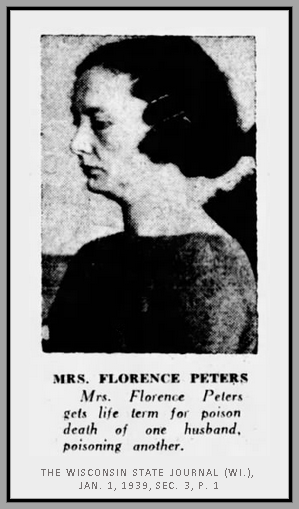 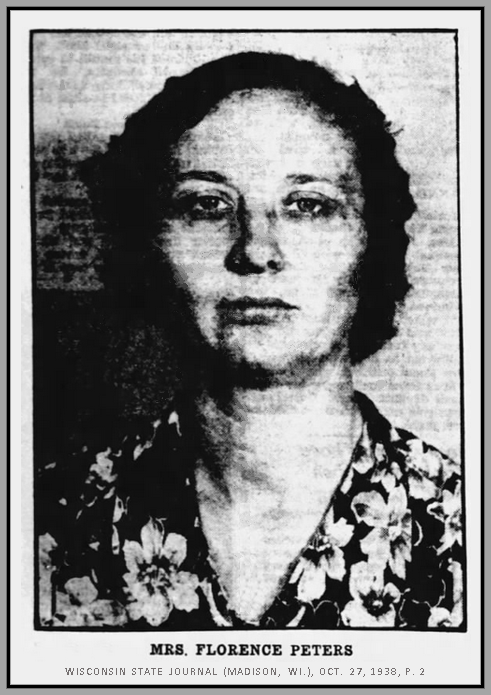 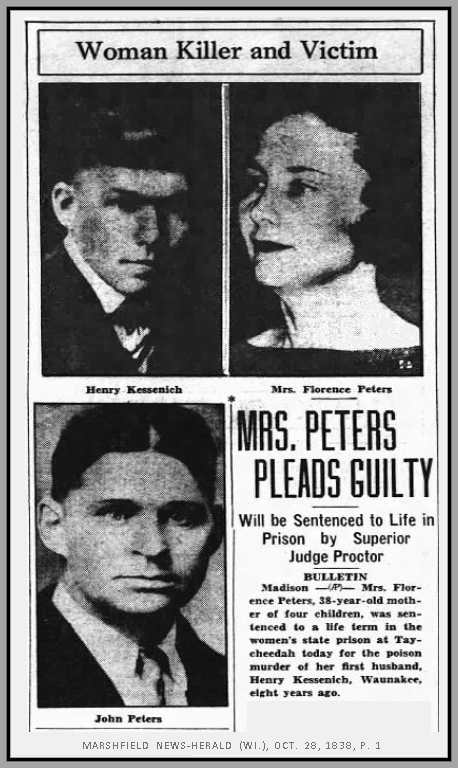 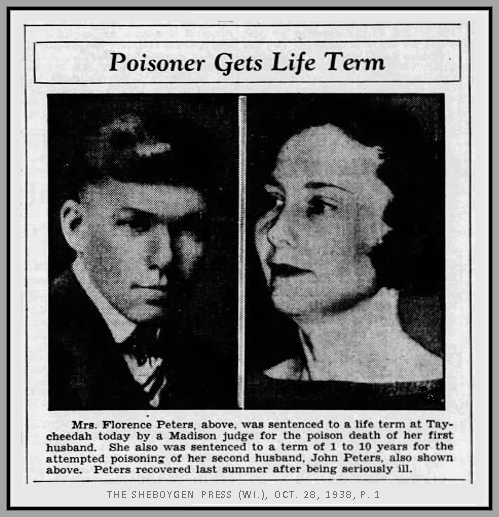 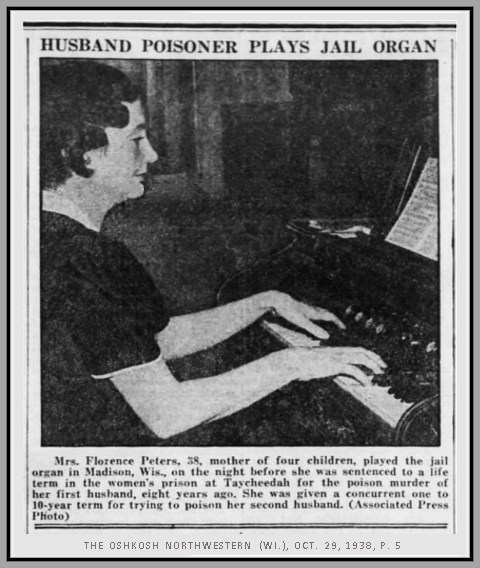 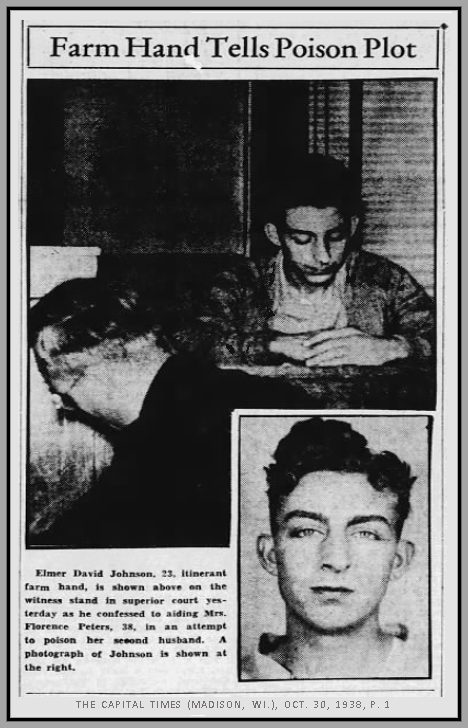 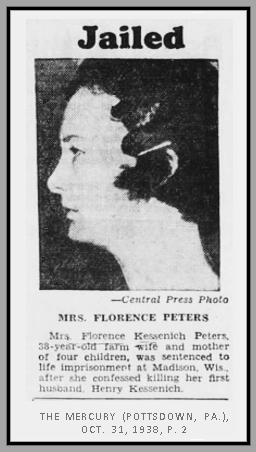 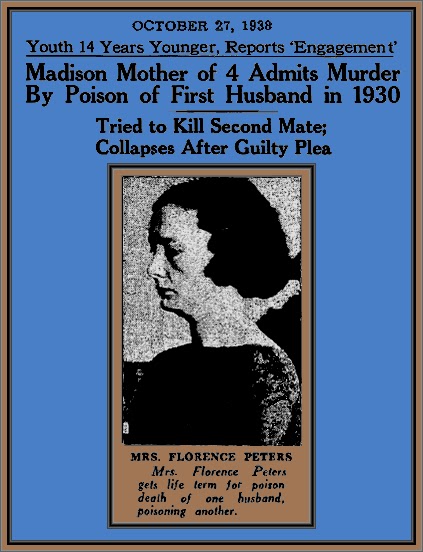