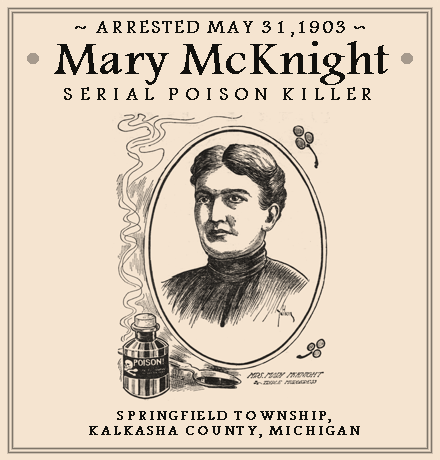 FULL TEXT (Article 1 of 3): Mrs. Mary McKnight, who has been called a modern Borgia because of her confession to the murder of her brother, his wife and baby, and who is suspected of having caused the deaths of eight other persons by the stealthy administration of strychnine during the past fifteen years, has lived in Kalkaska, Mich., all her life, respected and supposedly sane. But for a filing of a mortgage with the figures raised, alleged to have given her by her brother, the crimes might never have been discovered. She first confessed to one murder, then at other times to two others, and it is thought she will tell of the killing of some of the other persons, including two of her former husbands. 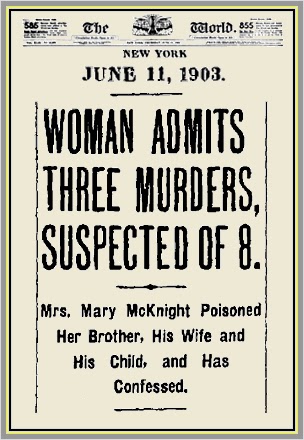 FULL TEXT (Article 2 of 3): Kalkaskan, Mich., June 10. – Mrs. Mary McKnight, who is in jail here charged with the murder of her own brother, John Murphy; Gertrude Murphy, his young wife, and their three-months-old babe, has made a confession as follows:

“The baby woke up and cried while its mother was gone, and I mixed up a little strychnine in a glass with some water and save a spoonful to the baby. I didn’t mean to harm the little thing at all. I confessed all to the Lord this afternoon, and I feel that he has forgiven me.

“When Gertrude came home and found the baby dead she got awfully nervous. She came to me and said: ‘Mary, can’t you give me something to quiet me; something that you take yourself?’ I said that I would, and I really didn’t think that it would hurt her if I gave her one of the capsules. She had spasms right after that, and I suppose that It was the strychnine that killed her. I really didn’t mean to hurt her.

“Then John seemed to feel so badly about it, so broken up, that I often thought after Gertie died that it would be better if he were to go, too. John was feeling bad one night a couple of weeks after Gertrude died. He came to me and wanted something to quiet him. I had two or three of the capsules on my dresser, and I told him to go and get one of them.

“I didn’t mean to hurt him, but I thought that it would sooth him, and then I thought that. It would be for the best if he were to go, anyway. He helped himself, I don’t know whether he took one or two. Then he went to bed, and by and by he called me. Mother came, too, and he began to have those same spasms. I suppose that the strychnine was working.”

The whole of the confession was given voluntarily, and Mrs. McKnight signed it after Prosecutor Smith had written it out.

~ Suspected of Killing Eight Others. ~

There have been eighteen deaths among Mrs. McKnight’s immediate associates or in her own family in less than that number of years, and besides the three Whose murder she has acknowledged, there are eight others who died under such peculiar circumstances that she is strongly suspected of having poisoned. them as well. Their names fellow:

In almost every one of these cases Mrs. McKnight had been nursing the person who died and was such in close contact that it would have been an east matter for her to have administered the poison, if that were really the cause of death. The authorities at Grayling, Alpena and Saginaw are now working on the theory that poison was administered in every case, and here possible the bodies will be exhumed and the usual tests for strychnine applied. Even though a body may have been buried for five or ten years, the teat used to detect strychnine poisoning be available provided the body has not lain in wet or marshy ground. 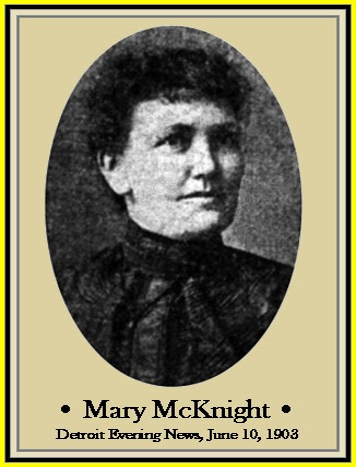 Alpena where Mrs. McKnight went to live with her first husband, James Ambrose, who was in the painting and decorating business with Ernest McKnight. The two families were intimate and occupied the same house. Ambrose was in ill health, and is said to have had consumption which might account for the early death of the first three children.

Jane Ambrose, the eldest child, was seven years of age when she went to visit her grandmother at Monroe. There she was taken ill suddenly and died. The next to die was James Ambrose, Mrs. McKnight’s husband; he was said to have died of consumption, but the symptoms ware such as to puzzle the doctor in attendance. Ambrose seemed to too in great agony and his limbs twitched convulsively.

A fatality seemed to cling to the house, for Mrs. McKnight, the wife of her husband’s partner. was next taken ill, and her sister, Mrs. Gig Teeple, came to nurse her, bringing with nor her husband and her baby, the child being left much in the care of the widow. Mrs. McKnight died, the symptoms being partial paralysis, a spasmodic twitching of the limbs and convulsions. Next night the baby was taken sick and died the following morning, the symptoms being the same as those of the mother.

Mrs. Ambrose and her five-year-old daughter May, then went on a trip to visit some friends at Saginaw, but before reaching there May was taken ill on the train and go was the mother. They were removed to a hospital, where the mother recovered, but the child died. Left alone in the world Mrs. Ambrose returned to her sister, Mrs. Chalker, until her marriage to McKnight should take place, which was some three weeks later. She then went with him to live at Alpena, but latter they returned to Grayling. She went one might in May, 1892, to Mr. Chalker’s for tea and while they were at the table Mrs. Chalker’s daughter, Eliza, was taken suddenly ill with partial paralysis, foaming at the mouth, convulsions and twitching of the limbs and died in about four hours. The doctors attributed it to congestive grip, although they were not satisfied altogether the temperature not being what they expected.

The symptoms were precisely the same as those of Miss Chalker, but the doctors never thought of poison, although they were the same who had attended the previous case. It was only when the woman was arrested a few days ago that their attention was directed to the possibility of poison having been used, and it immediately occurred to them the symptoms were precisely those which strychnine would produce. The girl was dead in four and a half hours, the spasmodic twitchings, being such that they could not keep her in the bath of mustard and water.

The next to die was Ernest McKnight, Mrs. McKnight’s husband. In November, 1898, he went out to his farm, about three miles from Grayling, taking with him a lunch that his wife had made up. He unhitched his horses, but did not unharness them. After working for some hours he sat down arid ate his lunch and immediately afterward he was taken with griping pains. He suffered untold agony and for a day or two his body sometimes bending backward like a bow, his limbs twitching convulsively and his throat partially paralyzed.

On Monday night he had recovered sufficiently to sit up in bed and smoke as he talked with his neighbors about his strange experience and they left shortly before midnight, expecting to see him out the next morning. In the morning he was dead. Still Dr. Leighton did not suspect anything, although the symptoms worried him considerably. It is his opinion now that strychnine was administered and that McKnight had been given a second dose on the Monday night. Three years ago Mrs. McKnight got word that a friend, Mrs. Schnesburger, was ill, being worn out with nursing; she went to Saginaw to help out and nurse the old woman, and the latter died in a few days, Mrs. Curry, Mrs. Schnseburger’s daughter, Mrs. McKnight, went out for a drive together. But two days later she was dead, too.

Mrs. McKnight then returned to Grayling and went to visit Mrs. Jenson. Mrs. Jenson was taken seriously ill and had to go to a hospital, leaving her house in charge of Mrs. McKnight. On Good Friday Dorothy, the little daughter of Mrs. Jenson was playing about the house with other children.

Mrs. McKnight told the woman in the house next door that Dorothy had exhausted herself with the skipping rope and was seriously ill. A doctor was called, but the girl was dead before he arrived, She, too, had the same convulsive twitchings and the same foaming at the mouth. 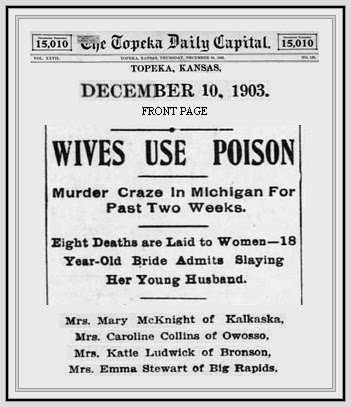 The McKnight case in context:

FULL TEXT (Article 3 of 3): Detroit, Mich. Dec. 9. – Modern prototypes of Lucretia Borgia are held responsible for eight deaths from poisoning which have occurred in Michigan within the past few days. One woman is charged with the murder of a hired man, while a third has confused to poisoning her husband.

Two other cases of poisoning, in both of which women are implicated, are still under investigation.

The known places are:

Mrs. Mary McKnight of Kalkaska, charged with poisoner her brother, his wife and their child.

Mrs. Caroline Collins of Owosso, charged with poisoning a hired man. [Note: She was suspected of three other murders as well.]

Mrs. Katie Ludwick of Bronson, guilty of murdering her husband, according to her own confession.

Mrs. Emma Stewart of Big Rapids, suspected of being responsible for the death of her husband, who died of strychnine poisoning.

At Coldwater, Mrs. Katie Ludwick, whose husband died three weeks after their marriage in Bronson township, was arrested last night and brought to the county jail this morning, charged with murder. This afternoon, in the presence of the Rev. Father Hewitt and jail officials she acknowledged her guilt.

John Ludwick of Bronson township was married about three weeks ago to Katie Bistry, aged 18. Both are Polish. She had seen him only four times previous to their marriage. Katie seemed reluctant, but her parents urged the marriage. After their marriage Mrs. Ludwick bought arsenic twice at Bronson, stating they were bothered with rats.

Last Thursday, she says, she administered the poison and her husband died. Arrangements had been made for the [missing phrase in original] and the wife attended a wedding while the remains lay neglected in the house.

George Stewart, a farmer, living five miles east of Big Rapids, age about 40 was taken suddenly ill and died in convulsions before a doctor could reach him. Arrangements had been made for the funeral, when it was determined to hold an investigation, it having been learned that Stewart’s wife recently purchased some strychnine in the dead man’s stomach. Stewart and his wife had been married sixteen years and had no children. 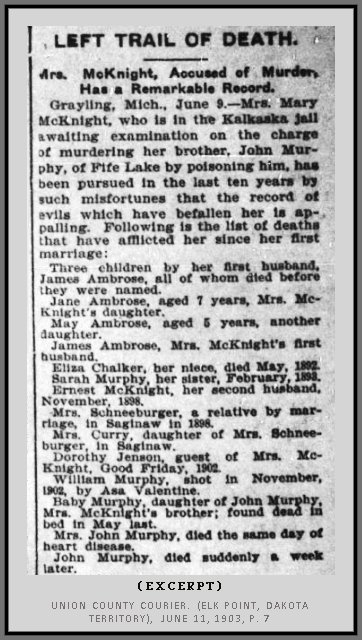 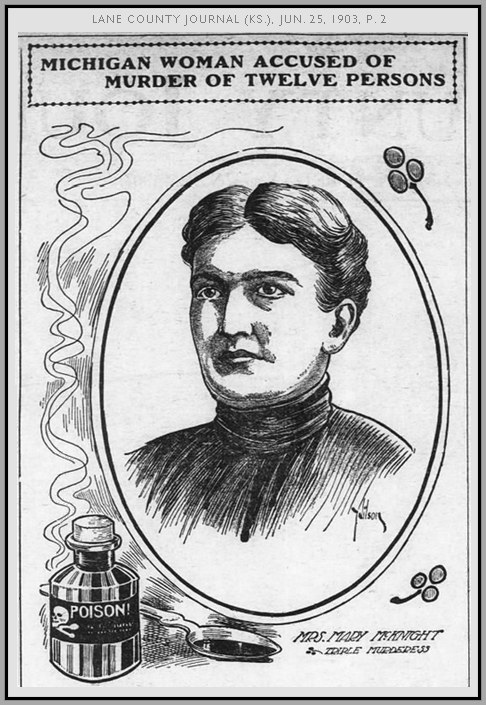 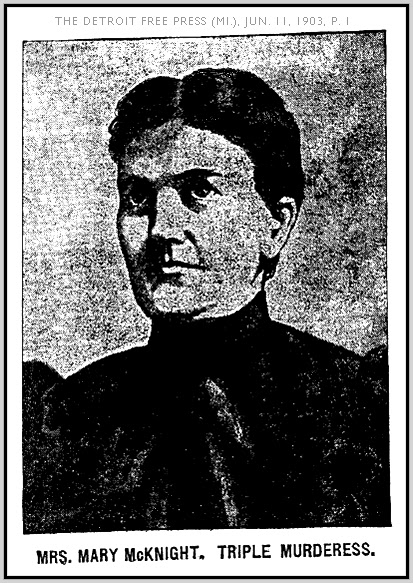 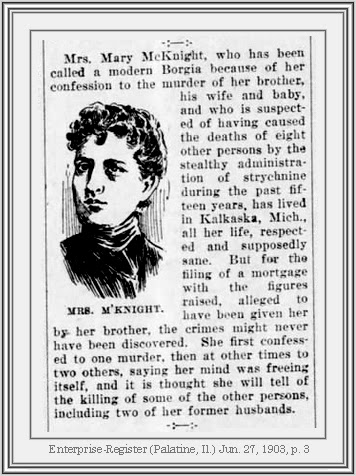 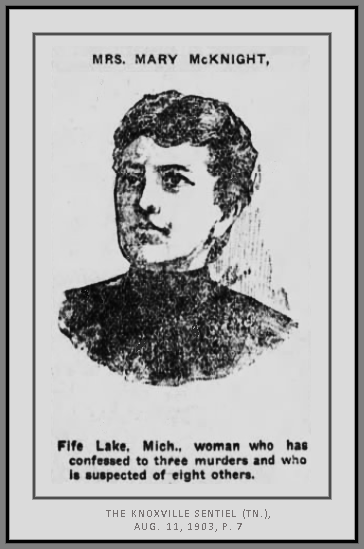 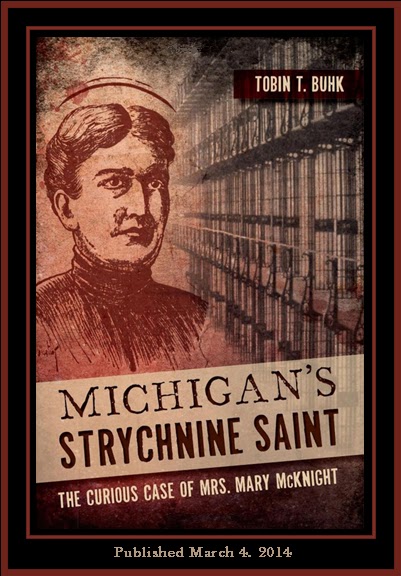 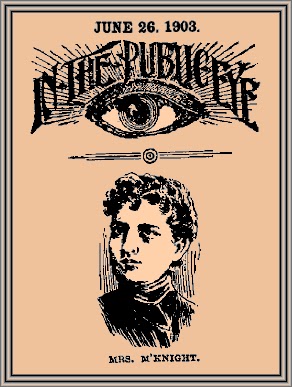