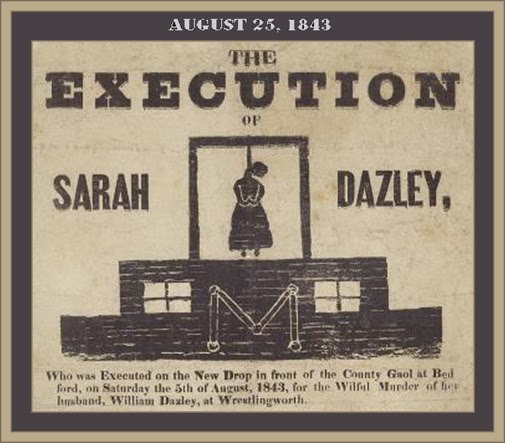 EXCERPT (Article 1 of 3): In March 1843, authorities charged Sarah Dazley with murder. Although in her twenties, Dazely had already been married seven times with her last three husbands dying inexplicably. She was about to be married an eighth time when her husband-to-be, upon hearing neighbors referring to his bride as “a female Bluebeard,” decided to  cancel the wedding and bring his suspicions to the police. The three husbands were disinterred along with an infant who had died in 1840. Chemical tests revealed the presence of lethal doses of arsenic in two of the husbands while the other corpses had decomposed too much for testing to be possible. Financial gain was never identified as a motive in the murders by Sarah Dazely – she seemed to kill almost vacantly, simply to remove impediments her husbands presented in her desire to marry somebody else. On August 5, 1843, she was hanged publicly before an unruly crowd of 10,000 spectators.

FULL TEXT (Article 2 of 3): Sarah Daisley [sometimes spelled Dalzey], a young woman, has been accused, at Wrestlingworth, in Bedfordshire, of poisoning two husbands and a child. She was apprehended in London last week, and was briefly examined at the Mansionhouse; the Lord Mayor ordering her to be conveyed to Wrestlingworth, under the charge of a Policeman; and an inquest was held at that place on Friday. The body of Daisley, the second husband, which was buried six months ago, had been exhumed for the purpose of testing the contents of the stomach, and a deposit of arsenic was found. Several witnesses were examined. A servant-girl who lived with Mrs. Daisley, saw her mistress make up three pills, which she wanted her husband to take; but he refused. The girl then tried to persuade him to take them, taking one herself; when he swallowed the other two. The girl was afterwards so ill as to be obliged to leave the place; and her mistress scolded her for having taken the pill. Another witness saw Mrs. Daisley throw away some pills that she had received from a druggist, and replace them with others that she had in her pocket, larger and darker than those the doctor gave. Mr. Sandhill, the medical man who had attended Daisley, said he did not consider him to have been in a dangerous state; and was astonished to hear of his death. He wished to open the body, but Mrs. Daisley and her mother-in-law objected. Mrs. Daisley came up to London, and one John Waldock was about to marry her a few weeks ago; but a person had observed to him, “surely you are not going to marry that she-devil, who has already murdered two husbands and a child?” and he broke off the match. The Jury returned the following verdict—” That William Daisley died from the effects of arsenic administered to him with a guilty knowledge by Sarah Daisley, his wife equivalent, said the Coroner, to a verdict of wilful murder. The woman was committed for trial.

FULL TEXT (Article 3 of 3): On Saturday the awful sentence of the law was carried into execution on the body of Sarah Dazley, who was convicted at the late Bedford assizes of the wilful murder of her husband, and suspected of being accessory to the death of her former husband and her daughter, by administering a quantity of arsenic to them. She had been every day visited by the reverend ordinary of the gaol, to whom it is understood she has made some confession of her guilt. In going to the gallows, she appeared in a dreadful condition, and was obliged to be supported. She was executed at twelve o'clock, in the presence of an immense multitude, amounting to nearly 10,000 persons. The body, after hanging the usual time, one hour, was cut down, and was interred the same night within the precincts of the prison. According to the Stockport Advertiser, arrangements are now in progress for the reception of 300,000 stand of arms in Chester castle, for the use of the northern district. 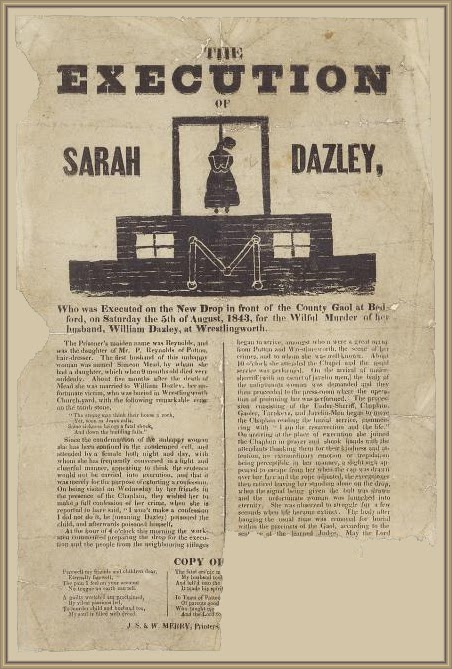 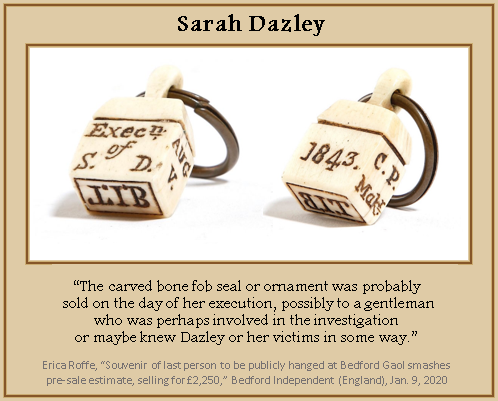