Catherine Batchelor, “Accused of Poisoning Two Husbands, and the First Wife of Her First Husband” - 1871 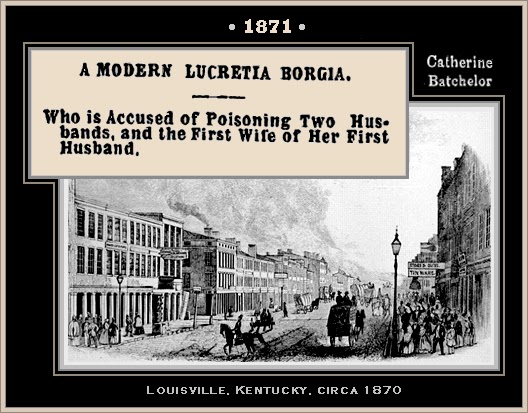 Note: Some sources give Catherine’s maiden name as Melchoir and others give Shoemaker.

FULL TEXT (Article 1 of 3): Catherine Shoemaker was a very pretty girl in the employ of Mr. Sharp, a very wealthy citizen of Spencer County, Ky. Her mistress died – with a bad taste in her mouth, This Catherine married the widower, and he only arrived long enough to bequeath all his property to his young wife; when he died – with a bad taste in his mouth. She now made Mr. Samuel Batchelor a Benedict for love’s sweet sake. The relatives of her first husband sued her and had Mr. Sharp’s will declared null on the ground of undue influence. Poverty coming in at the door of the Probate Court, love flew out at the window, and Mr. Batchelor died – with a had taste in his mouth. Consequently Mrs. Sharp-Batchelor, nee Shoemaker, in prison.

FULL TEXT (Article 2 of 3): There is still another woman poisoner. She is known as Catherine Shoemaker-Sharp-Batchelor, and lives in Spencer county, Kentucky. She is pretty and accomplished, like the rest of the prisoners, and if the law permits her will doubtless secure half-a-dozen more husbands before she dies. Her story, as told by one of our exchanges, is delightfully brief and piquant. “Employed by a wealthy citizen, James Sharp,” we read, “she poisoned his wife and married him. Having left her all his property in a will, he died suddenly. Then she married another man and poisoned him. Sharp’s relatives now have her in prison.” 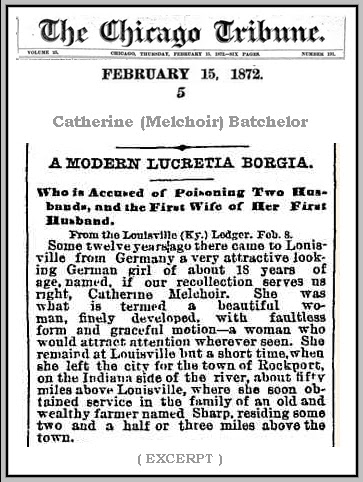 FULL TEXT (Article 3 of 3): Some twelve years ago there came to Louisville from Germany a very attractive looking German girl of about 18 years of age, named, if our recollection serves us right, Catherine Melchoir. She was what is termed a beautiful woman, finely developed with faultless form and graceful motion—a woman who would attract attention wherever seen. She remained at Louisville but a short time, when she left the city for the town of Lockport, on the Indiana side of the river, about fifty miles above Louisville, where she soon obtained service in the family of an old and wealthy farmer named Sharp, residing some two and a half or three miles above the town.

Mr. Sharp and his aged wife lived alone together, their children having all married and left the old homestead. The old people were highly esteemed and were well-known to nearly all the citizens of the county. Catherine found her new home a very pleasant one, and was apparently well contented and happy. About two years after she had entered the Sharp family, Mrs. Sharp was taken ill. She was confined to her bed for some time; but growing better, her speedy recovery was fondly hoped for by her husband and children. Very suddenly, however, she was taken worse, suffering intense pains in the abdomen for some hours, when she died. The symptoms of her fatal illness, it was remembered a few years later, were decidedly those of poison from arsenic and strychnine.

Mr. Sharp and his children mourned her death; but no one seemed to feel it more deeply than Catherine, and this was remarked throughout the neighborhood: and so Mr. Sharp prevailed upon her, which was not difficult, to remain in the house as housekeeper, and general superintendent of the domestic department of his extensive farm, paying her a handsome salary for her services. Time wore on, as time is always doing, and the wounds that grief at the demise of his wife had inflicted upon the heart of Mr. Sharp were healed. And then it bethought him that, with Catherine as his wife, his declining years would be full of comfort, and so he paid court to the young maiden. She was averse to the union proposed by the old man; it would be too much like uniting June with December, she argued, as she looked up languishingly from her lustrous black eyes and beautiful face into the face of her aged lover. Those glances as she well knew were not to be withstood; and so the old man’s passion was only inflamed, and suit pressed with more earnest determination.

Catherine took a few days to deliberate over the matter, and then she returned answer to her persevering but gray-haired lover that she would marry him, on condition chat he would deed her his farm, valued at about $25,000, and certain moneys and other property. This the old man agreed to do, and in the course of time all the necessary papers for the transfer were legally drawn and placed in Catherine’s hands. Then the wedding took place, and for a couple of years or more the infatuated old man bathed in the sunshine of her smiles, and received her toyings with all the delight of a child. But suddenly he died. His disease was a languishing one at first, and indicated towards its fatal termination a speedy recovery. But those dreadful pains that had been noticed in the illness of his wife, immediately prior to her demise, supervened, and as suddenly and painfully as his aged wife had died, so did he. His children and many of his neighbors believed that both he and his first wife had died from poison at the hands of Catherine, but they dared only breathe their suspicions in suppressed whispers, lest the law should take hold of them in the shape of an action for slander.

Catherine was rich, she had but just reached the prime of womanhood, was the most beautiful woman in the country, and it is not at all surprising that the days of her widowhood were made bearable by the attentions she received both from men and women. In due course of time her grief was so much assuaged that she received as a suitor for her hand, a well-known and popular merchant, named Batchelor, who did business, we believe, at Rockport and Evansville. Mr. Batchelor was supposed to be wealthy, and so his suit for Catherine’s heart and hand prospered, and they were married. The course of their married life ran smoothly enough. Indeed, their apparent happiness became the subject of remark. Both were apparently deeply devoted to each other.

But after a year or two of bliss, Mr. Batchelor was attacked by a languishing illness, which increased and diminished in severity by turns, until the disease which puzzled the skill of the physicians, took a favorable turn, and strong hopes were entertained for its speedy and favorable termination. It was a noticeable feature of Mr. Batchelor’s disease, as it had been of the disease of which Mr. Sharp and his first wife had died, that it was seated in the stomach, and no medicines seemed to reach or control it. His partial recovery was, therefore, unaccountable to the physician upon any other hypothesis than the great physical recuperative powers of Mr. Batchelor. But in the midst of the fond anticipations of his friends for his recovery, Mr. Batchelor suddenly died in great agony, suffering intense pain in the stomach.

He was buried, and the widow’s wail sounded over his grave, and was re-echoed from the old forest that skirted the cemetery. But the dead husband was a Mason, and in the lodge his sudden death, and the sudden and similar decease of Mrs. and Mr. Sharp, were discussed, and the conclusion arrived at was that poison had aided their sudden exit from the world, and that Catherine Batchelor was the poisoner. And so the remains of Mr. Batchelor were quietly disinterred, the stomach taken from them, and sent to a noted physical and chemist for analyzation. The result of the analysis was the discovery of enough mineral poison to produce death, and the evidence that Mr. Batchelor had died from poison.

Mrs. Batchelor was arrested, lodged in jail, indicted by the Grand Jury, and in due time arraigned for trial. But, upon affidavit made by her that she could not have a fair trial at Rockport, in consequence of the excitement against her, and a change of venue was permitted, and the case was taken to Perry County. The trial will commence at Cannelton on the 29th of the present month, before Judge Laird, when if proved guilty, it is to be hoped this modern Lucretia Borgia will be placed where she will have no further occasion to practice her murderous arts. Mr. Batchelor was well known to the merchants of Louisville.

[“A Modern Lucretia Borgia - Who Is Accused of Poisoning Two Husbands, and the First Wife of Her First Husband,” (from The Louisville Ledger), Freeport Journal (Il.), Feb. 28, 1872, p. 7]

The March 2, 1872, edition of the Cannelton Reporter reported that when the jury returned in a few minutes with a verdict of “not guilty,” the onlookers congratulated Catherine on her acquittal. 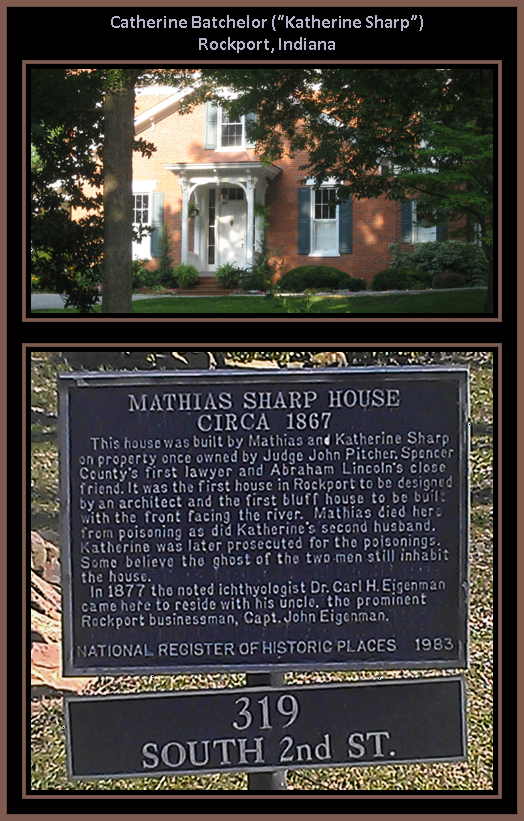 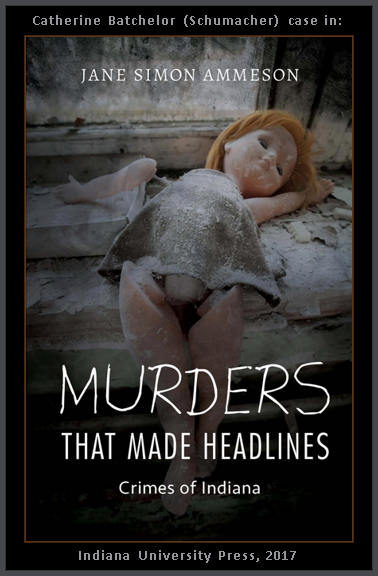