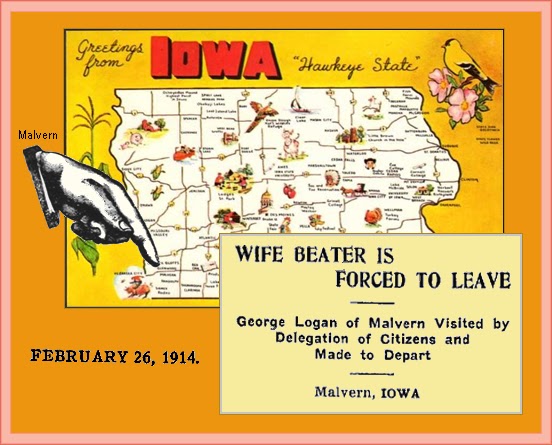 FULL TEXT: George Logan, an erstwhile citizen of Malvern, has made tracks toward another locality.

Logan has made himself a first-class nuisance in many ways. He had beaten, cursed, threatened and almost starved his wife and four children.

His wife in fear of her life did not complain to the authorities of his conduct.

Finally the neighbors would stand his actions no longer.

Monday Feb, 23 about the hour of 11 A. M. a delegation of citizens consisting of a minister, church members and business men called upon the aforesaid Logan. Their spokesman made a few pointed remarks about the conduct of the addressed party. The closing words were to the effect, that one George Logan had gone the limit of general cussedness, and that his health could be promoted by him seeking another clime.

The committee gave him one hour to get out of town and to be sure and stay out if he regards his welfare for any thing.

The result was that the cowardly wife beater got out of town by the appointed hour of noon.

There will be a good chance for him to test the strength of hemp if he ever returns and under takes to cut up any more didoes. His family will be cared for by the citizens of the town.

[“Wife Beater Is Forced to Leave - George Logan of Malvern Visited by Delegation of Citizens and Made to Depart,” Mills County tribune (Glenwood, Io.), Feb. 26, 1914, p. 1]