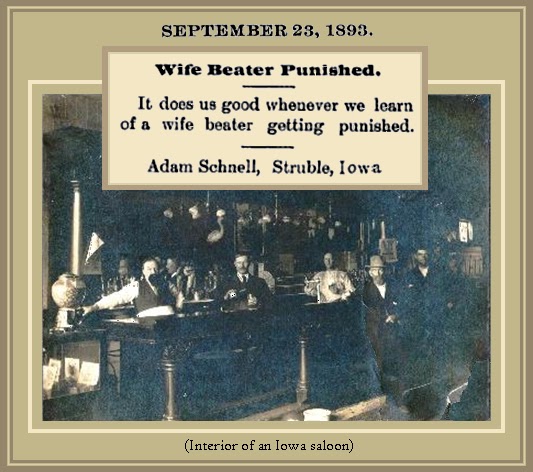 NOTE: This article is one of countless old newspaper reports which demonstrate that the claim made by feminist professors, lawyers, journalists and government bureaucrats that domestic violence against women was tolerated by American society in the 19th century is, like so many other feminist claims, a bold faced lie.

FULL TEXT: [Struble, Iowa] – It does us good whenever we learn of a wife beater getting punished. News comes from Struble in Plymouth county [Iowa], of an assault and battery case that will probably cost a wife beater an eye. Adam Schnell, a well known farmer who lives near Struble, is noted for a bad temper and for abusing his wife and children. Recently his wife left him, since which time he has been getting more ill natured than ever. Only a short time ago he was arrested and brought before Justice Kain at LeMars for beating a son 15 years old. He blamed Justice Moran of Elgin township for having something to do with his wife's leaving, and last Friday decided to go to his place and do him up. Not finding the justice at home he followed him to Struble, where he encountered him in a saloon.

Mr. Moran surprised Schnell by knocking him down and walking all over him. The rest of the crowd in the saloon thought it a good time to punish Schnell for the way in which he had abused his family, and each one present took a kick at him. The physician who is attending Schnell thinks he will lose an eye as a consequence of his injuries. His wife has been asked to go home and take care of him, but says she will not as she is afraid of him. Right. Let him suffer.