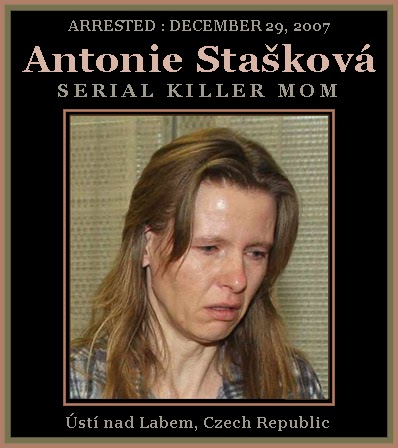 Antonie Staskova is a chronic child abuser. Two of her sons died before they reached the age of one – Radek in 1989 and David in 1992. Though one of the boys had a broken rib and arm the official cause of death was given as accidental suffocation. After the brutal 2007 murder by stabbing of her 5-year-old son, Honzíka Rokos, the earlier investigations were reopened by the regional prosecutor’s office. Another abused child, Stašková, was removed from Antoine’s custody and raised by the girl’s grandmother,

On May 27, 2007, the boy’s father, Roman Rokos, dropped of the child with the mother and her boyfriend, Paul Grepl. The trio then disappeared. The frantic father went through all the proper legal channels to get help in finding and retrieving his boy. In August police began searching for the missing boy. By December 5 an “extraordinary” search was launched. It was only four days later that his mother murdered him. It is believed she was motivated by hatred for the child’s father.

It was a bizarre murder. Antonie was dominant and easily manipulated the emotionally dependant boyfriend, Paul Grepl. She told him she wanted to kidnap her son and kill him and herself. This was in May, seven months before the murder. Boyfriend was put to work to help Antonie in her project. Paul dutifully prepared by digging a grave in Moravia, then he dug another in Usti nad Labem, and then it seemed necessary to change locations and did yet another in the same town.

On December 7 they took the child to one of the prepared pits. According to Paul, whom the prosecutors believed, Antonine injected her son’s right forearm injection of air and then took her knife stabbed him twice. Then she began to suffocate him. They removed the boy, who despite the grotesque attacks was still alive. It is estimated that the boy, writing in excruciating pain, live two or three hours longer.

Paul Gepl, at trial, described a hellish scene. The mother down in the pit Paul had dug for the purpose, held the child, talking to him holding his hand while she stabbing him over a period of “tens of minutes.” He said to his torturer: “Mother do not worry, I will not die.” After a while she lifted the child from the intended grave and deposited him in the backseat of her car. The boy wailed and moaned that it hurts. Paul, ever helpful, clapped his hand to his mouth to keep him quiet.

The prosecutor described Atonine and Paul’s conduct as a display of utter cynicism and disrespect for life. “They sat in their car while behind them the child died. He wailed and moaned, and although now she claims to love him, no one did nothing to save him,” she said.

It was a routine random police check of parked cars that led to the discovery of the murder. The boy was dead when they found him.

At the trial Antonine denied she did the deed. She admitted only that boys inserted the syringe with air into the boy’s arm, claiming she did not hit a vein.

Antonie Stašková and Paul Grepl sat quietly throughout the trial. Grepl stared into the country and Stašková bit her lip.

The pair blamed the boy’s father for their crime, harboring the belief that he would have kept the mother from her child. Paul claimed he loved the boy as his own son.

On August 11, 2008 Antonie Stašková maintained her innocence, yet  was convicted of murder and sentenced to 24 years in prison.  Pavel Grepl pleaded guilty to suffocation and received a sentence of 20 years.

1989 – Radek (younger than 12 mo), choked. Suspected murder.
1992 – David (younger than 12 mo), choked. Suspected murder. One of the two boys had a broken arm.
May 25, 2007 – parental kidnapping; Roman Rokos handed a five-year son’s wife that he should have for the weekend. Since then he is seen him.
Jun. 4, 2007 – The court issued a preliminary injunction according to which Jan Rokos should be entrusted to the care of his father.
Jul. 22, 2007 – Roman Rokos visited the police in Kynzvart and demanded his son, who was, according to his information the mother.
Jul. 23, 2007 – Antonie Stašková his son visited Kynžvart police claiming they no longer hadf the boy.
Aug. 2007 – Police launched a search after Jan Rokos.
Dec. 9, 2007 – Honzíka Rokos (or, Jan Rokos), 5; murdered by Antonie Stašková and Pavel Grepl. His body was buried, but later [returned to him?].
Dec. 28, 2007 - Police officers found when checking Antonie Staškova and Paul Grepl in Czech goldsmiths in the Most car body of a murdered child. Body found in Zlatníky.
Dec. 29, 2007 - Police have accused Antonie Staškova and Paul Grepl murder.
Aug. 11, 2008 – Antonie Stašková Sentenced to 24 years, Grepl sentenced to 20 years. Pavel Grepl pleaded guilty to suffocation. 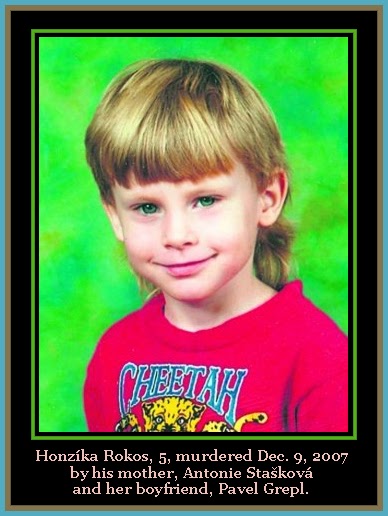 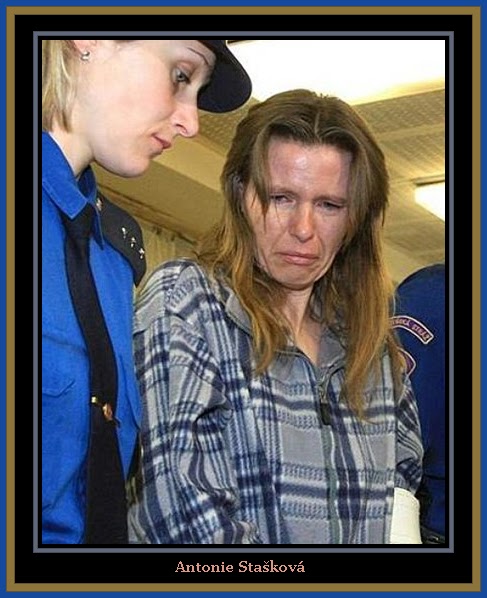 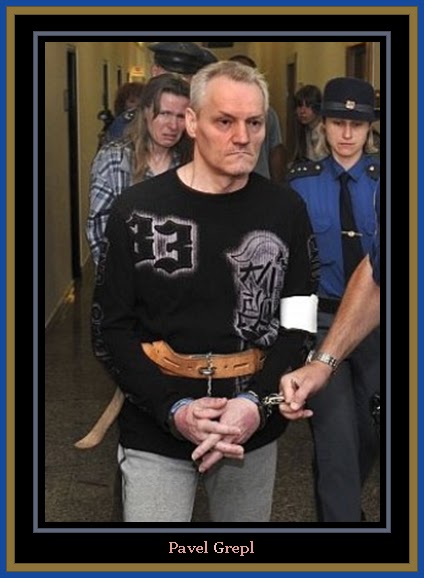 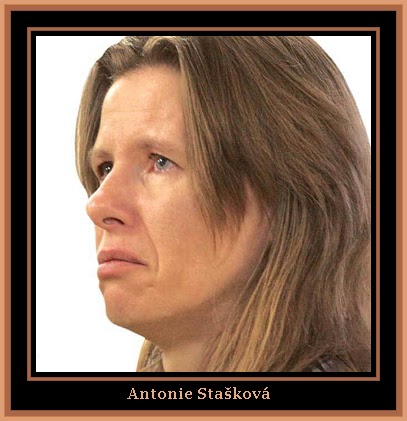