On July 18, 1989, Blanche Taylor Moore, a North Carolina 56-year-old widow, was arrested and charged with the first-degree murder of paramour Raymond Reid who died in 1986. She had fed him arsenic-laced pudding, according to prosecutors. The Reid murder was the prosecutors’ best case out of several suspected murders and one attempted murder. She is also suspected of having murdered by poisoning over a period of 21 years, her father, her mother-in-law, her first husband and of feeding her second husband a chicken sandwich containing 20 times the lethal dose of arsenic, which the man miraculously survived. On Nov. 14, 1990 she was convicted of the murder of Reid and on January 17, 1991 she was sentenced to death by lethal injection. The sentence was never carried out.

Blanche’s motive for murdering her victims is suspected, in some cases, to be personal resentment (towards her father, for instance) and other cases a financial one, or perhaps the two combined. The year before husband Raymond Reid was murdered, Blanche apparently torched her home in Burlington, N. C., and concocted a story about having seen a “pervert” about the place. She collected a small insurance settlement, bought a mobile home with those funds and that dwelling too was soon destroyed by fire, Blanche giving the same “pervert” story as an explanation. Blanche benefited financially from Reid’s 1986 death. “Steve Reid, 27, one of Raymond Reid’s two sons, said that after his father’s death Moore received $45,000 in life insurance and an additional $18,000 to $20,000 from Reid’s estate.”

In September 1970, James Taylor came down with the flu, sporting symptoms that included diarrhea, swollen glands, a sore throat, hair loss, bloody stool and urine, painful blisters on his hands and feet. Hospitalized near the end of the month, he died on October 2, barely an hour after Blanche brought him some ice cream from home. [Michael Newton, Hunting Humans: An Encyclopedia of Modern Serial Killers, 1990, Breakout Productions]


FULL TEXT: Winston-Salem – The testimony of nurses was credited with convicting a woman sentenced to death for spoon-feeding her boyfriend arsenic-laced food.

“Our nurses were wonderful witnesses,” prosecutor Janet Branch said Friday after a judge ordered Blanche Taylor Moore, 57, to die for killing Raymond Reid with poisoned peanut-butter milkshakes and banana pudding while he lay in a hospital bed four years ago.

1952 – married James Napoleon Taylor; two children, 1953, 1959.
1962 – began affair with Raymond Reid, the manager of the store where she worked.
1968 – P. D. Kiser, father dies.
Nov. 25, 1970  – Isla Taylor, m-in-law, dies.
1971 – James N. Taylor, husband #1, dies.
Jan. 23, 1985 – a mysterious fire broke out at her Burlington home. Blanche blamed a pervert for the blaze, and firemen confirmed arson as the cause, accepting her tale of a nameless man seen loitering around the property. Blanche collected a little fire insurance, investing the cash in a new mobile home. When fire razed the trailer a month later, she blamed that pervert again and collected another insurance check.
1986 – Raymond Reid, paramour, dies. “Steve Reid, 27, one of Raymond Reid’s two sons, said that after his father’s death Moore received $45,000 in life insurance and an additional $18,000 to $20,000 from Reid’s estate.”
1989 – Dwight Moore, husband #2;  poisoned by arsenic, recovered. “On 19 April 1989 the couple were married and honeymooned over a long weekend in New Jersey. They returned on a Monday, and on Wednesday Rev. Moore collapsed ill after eating a chicken sandwich. Doctors at N. C. Memorial in Chapel Hill determined that the cause was arsenic poisoning. Analysis later determined that Rev. Moore had survived the largest dose of arsenic from which a victim had not died.”
May 13, 1989 – North Carolina Memorial Hospital in Chapel Hill toxicology test results came back. They showed Dwight Moore had 20 times the lethal dose of arsenic in his system—at the time, the most arsenic found in a living patient in the hospital’s history. [“March 13” erroneously elsewhere]
Jun. 13, 1989 – first exhumation; Reid’s body exhumed from the Pine Hill Cemetery; medical examiner said that he died of arsenic poisoning.
Jun. 1989 – exhumed James Taylor’s body from the Pine Hill Cemetery; medical examiner said that he died of arsenic poisoning. Kiser and Taylor bodies also exhumed, smaller traces of arsenic found.
Jul. 18, 1989 – BTM (56) arrested. “On July 18, 1989, Blanche Taylor Moore was arrested and charged with the first-degree murder of Raymond Reid. Prosecutors opted to charge her with killing Reid rather than trying to kill Dwight Moore because they felt they’d be able to show her spooning arsenic-laced pudding to Reid.”
Oct. 21, 1990 – trial opened in Winston-Salem, for the murder of Reid.
Nov. 14, 1990 – convicted of the murder of Reid.
Nov. 17, 1990 – the jury recommended the death penalty.
Jan. 18, 1991 – sentenced Moore to die by lethal injection. 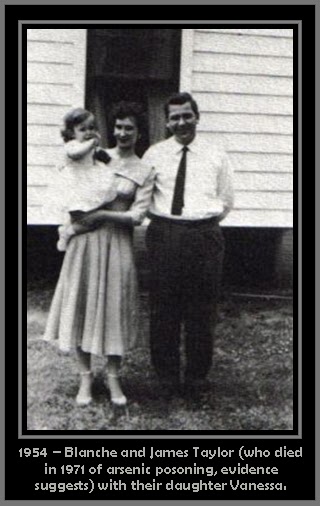 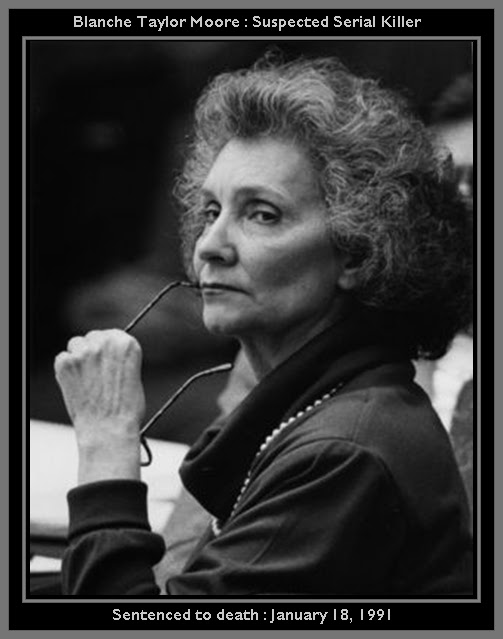 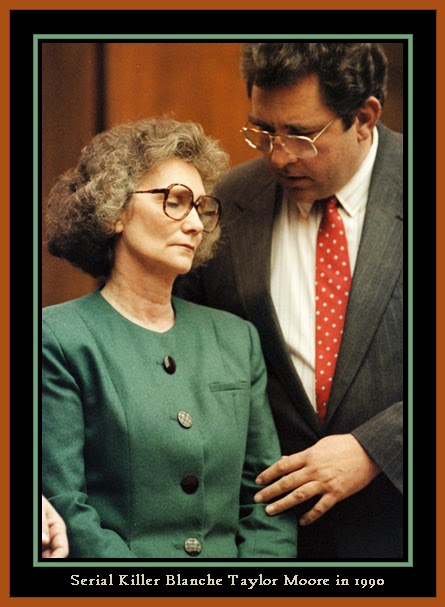 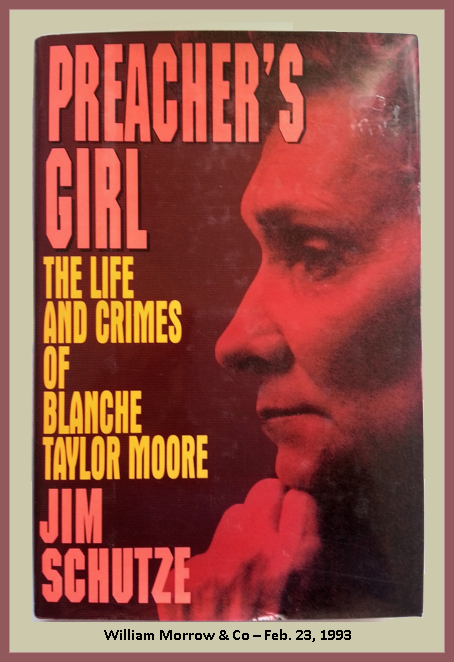