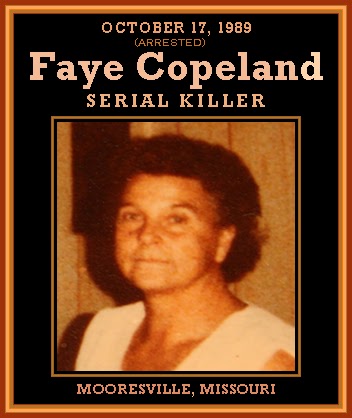 Wikipedia: Ray Copeland (December 30, 1914 – October 19, 1993) and Faye Della Wilson Copeland (August 4, 1921 – December 23, 2003) became, at the ages of 76 and 69 respectively, the oldest couple ever sentenced to death in the United States. They were convicted of killing five drifters at their farm in Missouri. When her sentence was commuted to life in prison in 1999, Faye Copeland was the oldest woman on death row.

Ray Copeland was born in Oklahoma in 1914. While he was growing up, his family moved around, struggling to survive during the Depression. As a young man, he began a life of petty crime, stealing livestock and forging checks, until he was caught and served a year in jail. After his release in 1940, he met Faye Wilson, and they were married soon afterward. They quickly had several children and money became tight. Ray continued to steal livestock and forge checks, but his increasingly bad reputation meant that the Copeland family had to keep moving around. During this time, Ray served several jail sentences, until he finally came up with a new plan: a way of improving his illegal money-making methods so as to be undetected.

Since Copeland was well known as a fraudster, he could not buy and sell cattle on his own. To get around this problem, he began to pick up drifters and hobos and employed them as farmhands. He would take his employees to the market and they would buy the cattle for him, using his bad checks. After the transactions, Copeland would sell the cattle quickly and the farmhands would disappear without a trace. For a while, the scam worked, but the police caught up and Copeland went to jail again. Upon his release, he resumed his criminal activities, but this time he made sure his farmhands were not as connected to him as before. This went on until a previous employee, Jack McCormick, called the Crime Stoppers hotline in August 1989 to tell them about the Copelands. McCormick claimed that he had seen human bones on the farm while he was employed there and also claimed that Ray had tried to kill him.

Police were initially skeptical of the claims, but after checking Copeland’s criminal record, they decided to investigate further. In October 1989, they visited the Copeland farm armed with a search warrant, dozens of officers and a team of bloodhounds. Initially, they did not find any incriminating evidence, but after further searching, three bodies of young men were discovered in a nearby barn. As the search continued, more bodies were found, all killed with the same weapon, a .22 Marlin rifle that was later found in the Copeland home.

It became clear that Ray was a cold-blooded murderer who killed his employees in the pursuit of money, but Faye’s actions were initially questioned. During the investigation, a piece of evidence came into light that connected her to the crimes as well: a quilt that she had made out of the clothing of the dead men. When she went to trial in November 1990, her defense mounted on a picture of her as a dutiful wife and mother who had endured beatings and general ill-treatment from her husband. However, the quilt remained a reminder that she knew full well that her husband was a serial murderer and did nothing to stop him. The jury convicted her of four counts of murder and one count of manslaughter. She was given four death sentences for the murders and life without parole for the manslaughter. In March 1991, Ray Copeland went on trial, was convicted of five counts of murder and sentenced to death.

Ray, upon hearing that Faye had been sentenced to death by lethal injection as well, showed no emotion and his reply reportedly was, “Well, those things happen to some, you know.” However, neither execution took place.

Ray died of natural causes on October 19, 1993, while awaiting execution. Faye’s attorneys appealed her conviction, contending that the jury had not been allowed to hear evidence that Ray had abused her for years. On August 6, 1999, federal judge Ortrie Smith overturned the death sentence, but let the convictions stand and commuted her sentence to five consecutive terms of life without parole. On August 10, 2002, Faye Copeland suffered a stroke which left her partially paralyzed and unable to speak. Weeks later, in September 2002, Governor Bob Holden authorized a medical parole for Faye, fulfilling her one wish that she not die in prison. She was paroled to a nursing home in her hometown. The following year, on December 23, 2003, she died aged 82 at the Morningside Center nursing home in Chillicothe, Missouri, from what Livingston County coroner Scott Lindley described as natural causes. She left behind five children, seventeen grandchildren, and (at last count) twenty-five great-grandchildren.

Excerpt: “The autopsy report determined that each man had been shot in the back of the head at close range. A register with names of the transient farmhands who had worked for the Copelands helped police identify the bodies. Twelve of the names, including the five victims found, had a crude ‘X’ in Faye’s handwriting, marked by the name.” [Charles Montaldo, “Serial Killers Couple Ray and Faye Copeland,” About.com] 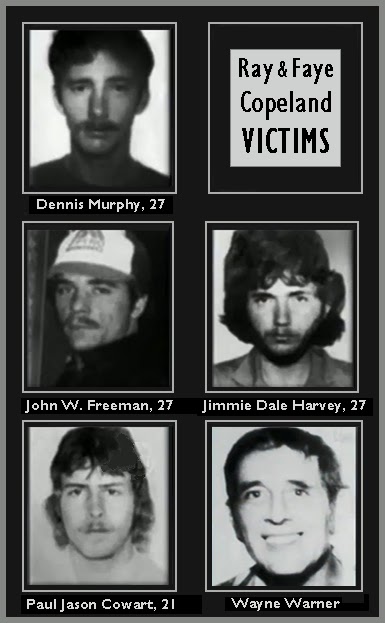 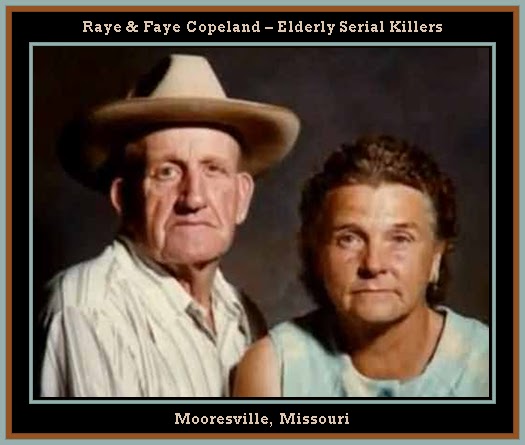 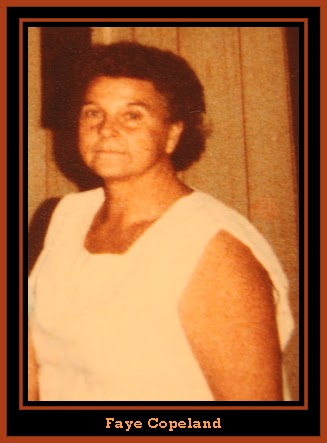 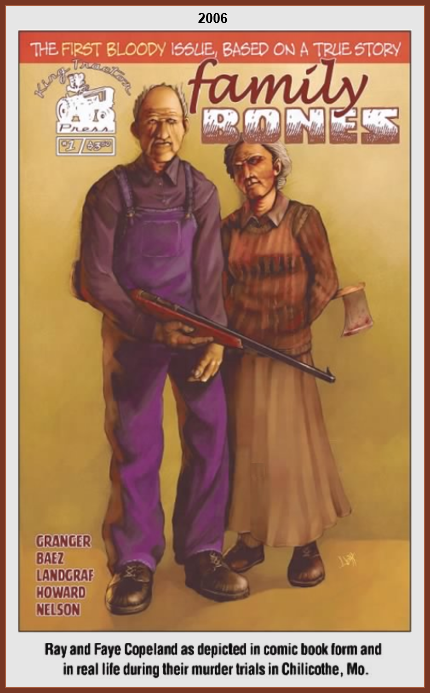