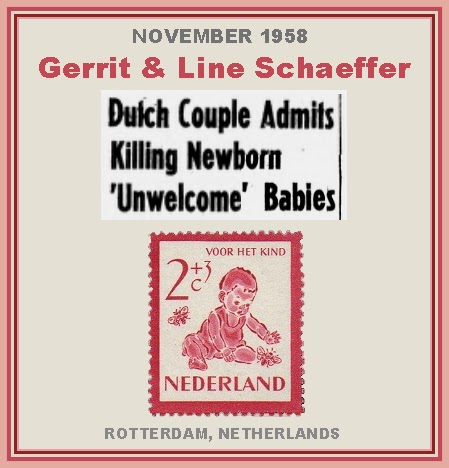 FULL TEXT: Rotterdam, The Netherlands – A Dutch plumber and his German-born wife today were sentenced to six years in prison for killing 5 of their 11 children just after birth because “they were not welcome.”

Gerrit C. Schaeffer, 36, who often befriended youngsters in his neighborhood, and his wife, Line, 35, who helped direct a children’s playground, freely confessed the killings over an eight-year period, starting in 1950.

Judge Charles J. Enschede said he was sentencing the couple to six years out of consideration for the six other Schaeffer children. The prosecution had demanded a 10-year sentence.

The Scheffers secret became known last November when the mother became ill and had to call a doctor after giving birth to her11th child without medical assistance.

The doctor notified police and after some questioning Schaeffer calmly admitted that he and his wife had killed five of their babies following a decision 10 years ago to have no more children.