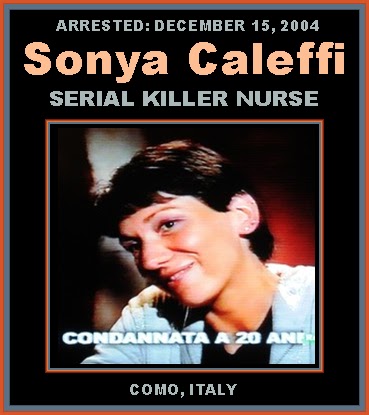 Sonya Caleffi, a 34-year-old nurse at Manzoni Hospital of Lecco, Italy, near Lake Como,  was arrested December 15, 2004 and made a written confession to six killings. Caleffi was anorexic and had in the past attempted suicide on three occasions between 2002 and 2004. Following her arrest police discovered in her home large number of books about mental illness (bulimia, anorexia nervosa) and death. The nurse kept a diary noting details of her patient’s deaths, 22 of who who had died on her shift.

In her confession Caleffi stated: "I just wanted to attract attention because I felt undervalued. And then those people had only a short time to live made me feel pity. That's why I picked up the pace of their death." She later retracted the confession. She gave a television interview to Panorama saying she remembered only the final patient to died under her care, Maria Cristina, a 99-year-old woman admitted to the hospital for routine care. She said that she had fabricated most of the earlier confession. Caleffi claimed in her TV interview that she had, once again, attempted suicide that same day, Nov. 10, 2014. Between September 1 and November 10, Caleffi killed seriously ill patients (in pre-terminal phase) by injecting them with air.

Due to the wildly disproportionate number of deaths that occurred on her shift, the hospital director Pietro Caltagirone reported her to police.

The prosecutor accused Caleffi of 15 murders and three attempted murders: 12 crimes taking place at Manzoni Hospital, and three at Sant’Anna di Como Hospital, where she worked from 2000 to 2001 in the emergency room.

On February 11, 2005 was Caleffi was transferred to judicial psychiatric hospital of Castiglione, for evaluation of her ability to stand trial. On December 14, 2007 Caleffi was convicted of five murders and two attempted murders and was sentenced to serve 20 years in the San Vittore prison.

Aug. 4, 2002 – attempt to kill himself with Lancia Ypsilon, throwing herself off the wall at Salita Cappuccini in Como. Then attempts suicide for three times between 2002 and 2004.
Sep. 1, 2004 – Sonya Caleffi hired as nurse in the medicine department of the hospital Manzoni of Lecco.
Nov. 8, 2004 – Caleffi transferred to the clinic. Indeed in his two months of work die 22 people too many. In 19 cases the Caleffi turn. The hospital leaders denounce the matter to the judiciary.
Dec. 14, 2004 – The nurse is stopped by the police. three pages confession admitting to killing five patients.
Dec. 15, 2004 is arrested, but admits only six homicides, 4 confirmed and 2 suspected.
Dec. 17, 2004 – The Davide De Giorgio judge validates the catch and has custody in a health resort, after having questioned.
Feb. 11, 2005 – Caleffi is transferred to judicial psychiatric hospital of Castiglione, where seven experts, within three months, will determine whether it is capable of discernment.
Dec. 14, 2007 – was sentenced to five murders and two attempted murders to serve 20 years in the San Vittore prison. 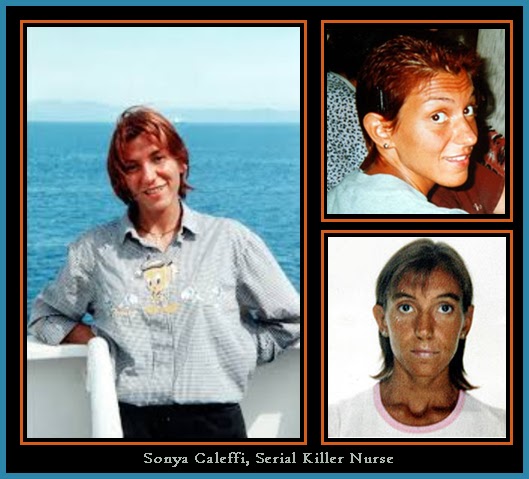 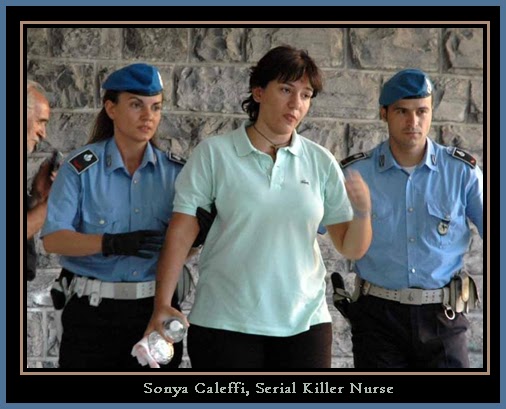