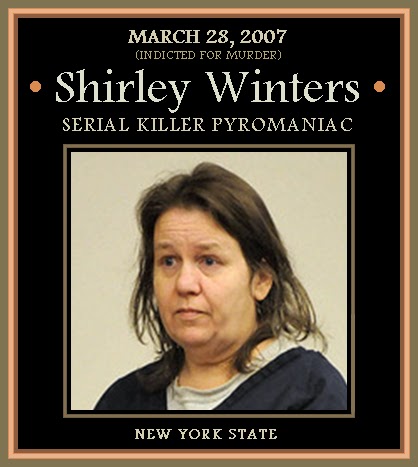 Wikipedia: Shirley Winters (born February 27, 1958) is a convicted serial murderer and arsonist from upstate New York. In 1980, she smothered her five-month-old son, Ronald Winters III. In 2007, she drowned 23-month-old Ryan Rivers. She is suspected of setting a fire which killed her two older children on September 12, 1979, and on the day prior to that killed a friend's three children. Per a plea bargain, she cannot be prosecuted for those homicides.

In 1966, Shirley Winters' 10-year-old brother and 4 and 11-year-old sisters died from an apparent carbon monoxide leak in the family home.

In 1979, Winters' first two children, 3-year-old Colleen and 20-month-old John, died in a 1979 fire in the family's Hyde Lake cabin in Theresa, New York. Investigators blamed an electrical defect. When her children's bodies were exhumed in March 2007, autopsies showed Colleen and John received blunt force head injuries before the fire had started.

Winters was in the proximity at least seventeen fires since the 1979 ones, nine determined as arson. She pleaded guilty to criminal mischief in relation to two in 1981. A November 12, 1989 fire started in a Syracuse home where Winters was staying with her three children. She rescued her four-year-old daughter and two-year-old son, but lost her five-year-old daughter, who rescued herself. She was convicted of burning her mother's home in 1997. Her mother died in a car accident two months before Winters began her eight-year prison term.

On November 28, 2006, Ryan Rivers drowned in a bathtub at his grandparents' Pierrepont home, while Winters visited. She was indicted by a St. Lawrence County grand jury in August 2007 of second-degree murder, first-degree assault and endangering the welfare of a child.

This prompted police to exhume Winters' son, Ronald Winters III, who died on November 21, 1980 in Otisco, New York, of supposed Sudden Infant Death Syndrome. Based on their findings, police charged Winters with second-degree murder on March 28, 2007.

On April 21, 2008, Winters pleaded guilty to manslaughter for drowning Rivers. Under the terms of the plea agreement, she also agreed to plead guilty in Onondaga County Court to first-degree manslaughter for smothering Winters. She was sentenced to 20 years for Rivers, and 8 to 25 years for Winters, to be served concurrently, with parole eligibility after 17 years. She is imprisoned at Bedford Hills Correctional Facility. By pleading guilty, she avoided possible second degree murder convictions and multiple life sentences, as well as prosecution for the 1979 murders of Colleen and John Winters.

1958 – Feb. 27: Shirley Baron is born. She is raised near South Onondaga.
1966 – All three of her siblings, Peter, 11; Joyce, 10; and Lita, 4 are found dead in their beds. Marilyn Baron, their mother, survives. Investigators decide the children were asphyxiated by fumes from a gas furnace. An exhaust pipe, likely damaged by a dog, is suspected. Shirley Baron, 7, is at her grandmother’s a quarter-mile away.
1977 – Shirley Baron, 18, marries Ronald Winters Jr., 21.
1979 – Sept. 12: Shirley’s friend in Hermon, NY (50 miles away from Shirley’s home), three children of the friend die in another house fire.
– Sept. 12: Fire in Theresa, in Jefferson County, kills two of the couple’s children. Shirley says the children were asleep in a bedroom, while she watched television in the living room. Her husband is at work. The investigation points to a piece of hot kindling left near the wood stove. The victims’ mother was a friend of Shirley Winters. After the fire, Ronald and Shirley Winters separate.
– Nov. 21: Ronald, the Winterses’ 5-month-old baby, dies in a trailer in Otisco. Cause of death: sudden infant death syndrome. It is Marilyn Baron’s birthday.
1981 – Jan. 3: Two separate fires break out in Shirley Winters’ trailer. Both are called arson.
– Feb. 10: Two more fires at her trailer. Winters is charged with arson.
1982 – Nov. 9: Before that case was disposed of, she has another trailer fire. She was charged with arson again.
1984 – Winters has a daughter, Joy.
1985 – She has a daughter, Ashley.
1986 – Nov. 12: A fire in Winters’ apartment building in Marcellus. Cause: Undetermined.
1987 – She has a baby, Clayton Winters. She has divorced Ronald Winters and moved with her children to Syracuse.
1989 – She goes on trial for another arson earlier in the year in Syracuse. The first jury is deadlocked; the second acquits Winters. As she awaits trial, fires break out at two different houses where she lives, and at her aunt’s garage.
– Nov. 12: An arson fire races out of control from a basement storage room where Winters lives on Willis Avenue in Syracuse. Winters says she’d smelled smoke. She takes two children to safety but loses track of Joy, who escapes on her own.
1990 – Jan. 6: Arson at her house on Split Rock Road. A Family Court judge removes Joy, Ashley and Clayton from Winters and awards custody to her former husband. After that, according to her mother, Shirley admits herself to Hutchings Psychiatric Center for a few days.
– April 10: Winters is indicted on arson and reckless endangerment in the Willis Avenue fire.
– March 18: Winters’ flat at 124 Lakeview Ave. catches fire. Winters gets out, as do her downstairs neighbors, a young couple with a 22-month-old child.
– Sept. 21: Fire set in the attached garage at 3853 Griffin Road, the home of Winters’ aunt.
– Oct. 5: Fire set in the same garage. This time the garage and house are destroyed. The next day, Winters is charged with making harassing phone calls to a neighbor. When she’s arrested, she hits a deputy and damages a patrol car.
– Nov. 14: Troopers charge Winters with arson in connection with a fire at a Camillus bowling alley, her fourth arson charge.
1997 – April 27: She sets fire to her mother’s home in Onondaga. She pleads guilty and admits she knew her cousin was in the building at the time. She’s sent to prison for eight years.
2004 – Winters is released from prison on parole, then violates terms of release by having a lighter.
2005 – June 14: Released from prison again.
2007 – March 16: Hospitalized after suicide attempt, according to Onondaga County District Attorney William Fitzpatrick.
– March 28: An Onondaga County grand jury indicts Winters on a charge of murdering her 5-month-old son Ronald Winters III in 1980 at their home in Otisco.
– Sept. 19: A St. Lawrence County grand jury indicts her on a murder charge in the November 2006 drowning of 2-year-old Ryan Rivers.
2008 –  April 21: She pleads guilty to first-degree manslaughter in Rivers’ death.
– April 24: She pleads guilty to first-degree manslaughter in Ronald Winters’ death, admitting she tried to seriously injure him when she smothered him.
– June 16: A St. Lawrence County Court judge sentences her to 20 years in prison.
– June 17: An Onondaga County Court judge sentences her to 8 1/3 to 25 years in prison. She will serve both sentences at the same time. 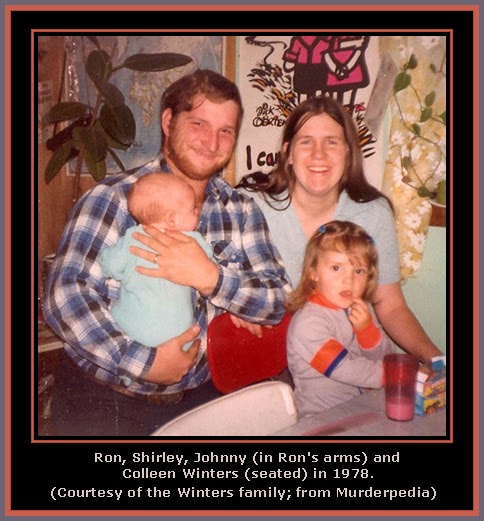 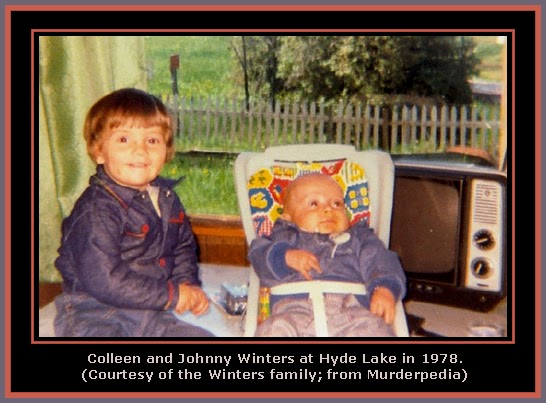 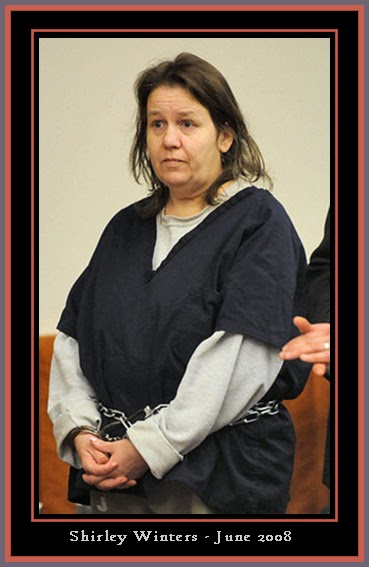