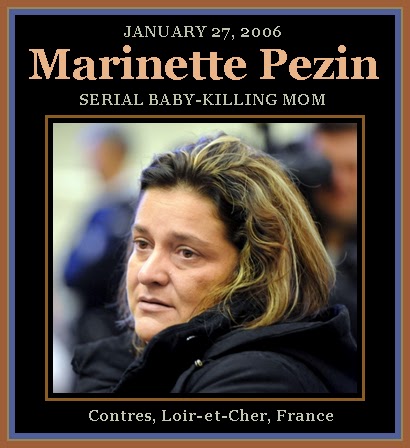 Few serial killer moms meet the stereotypical politically correct description (the Marxism-based “Duluth model”) of the female as manipulated victim of a powerful oppressive made who causes her to commit violence. Marinette Pezin’s case does, however, fit the stereotype and the court was justly merciful in their judgment.

In 2003 Mehmet Unlu, a retired Turkish immigrant bought a house in Contres, Loir-et-Chet, France from a couple named Edmond and Marinette Pezin, parents of four living children, a boy (22) and three girls, who were beginning divorce proceedings. Three years later he made a horrifying discovery. January 27, 2006 when digging in the garden with a spade he came across a small package, a scrap of blanket and a bit of plastic inside of which was the decomposed body of a baby girl. Police tracked down the previous owners and through a DNA test it was determined that Marinette Pezin was the mother. She expressed “confusion” at the news. She was charged with homicide and investigation continued.

Later that year, on October 12, 2006, Mehmet Unlu was planting leeks and dug up another package, this one containing a skull and some bones of another newborn. DNA testing was blocked (it is not clear from news reports seen so far what the reason was). Yet finally Marinette Pezin began telling the truth. She confessed that she had given birth in a bathtub and murdered the child by drowning. She admitted that in addition to the two babies discovered that there was another corpse of a newborn buried on the property. Investigators, using ground penetrating radar, covered the entire area with no results Finally in 2008 Marinette gave them the general location and they dug up the corpse which was buried 36mm in the ground under a pile of wood in the garden.

But Marinette had more to disclose. Back in 1989 she had given birth to child, in a toilet. In her confession she said that “someone” flushed the body down. She excused the killings asserting that her husband wanted no more children and that he was frighteningly overbearing: “authoritarian and violent.” She said her husband had no affection for any of their children. Her representations were plausible and were confirmed by her living children. Their father was a boorish tyrant. She had married Edmond at the age of 16 a man of 34. Before reaching the age of 20 years, Marinette had already given birth to four children including twins.

On February 3, 2011, the Assize Court of Blois convicted Marinette Pezin, 44, of killing three children but awarded her a suspended sentence – of only 5 years duration.

***
Oldest child Thierry, 27 (in 2011).
1989 – child born in toilet bowl and flushed. There, the husband was aware but did not want another child.
2003 – Mehmet Unlu buys house from Pezins, who were at the time beginning divorce proceedings.
Jan. 27, 2006 – body discovered by Mehmet Unlu. January 2006, Mehmet Unlu, Turkish pensioner who just bought a house in Contres (Loir-et-Cher), discovers, digging in his garden, a piece of blanket and a kind of plastic canvas. Inside, the body of a female baby.
Oct. 12, 2006 – body discovered. On October 12, while continuing the investigation, it is the woman of pensioner shows, gardening, a new piece of plastic bag. The police were alerted and exhume a piece of bone and a tiny skull belonging to a second baby.
Feb. 22?, 2008 – third body found buried 36mm in the ground under a pile of wood in the garden. ground penetrating radar.
Feb. 3, 2011 – Assize Court, Blois, MP, 44, receives a suspended sentence of five years.