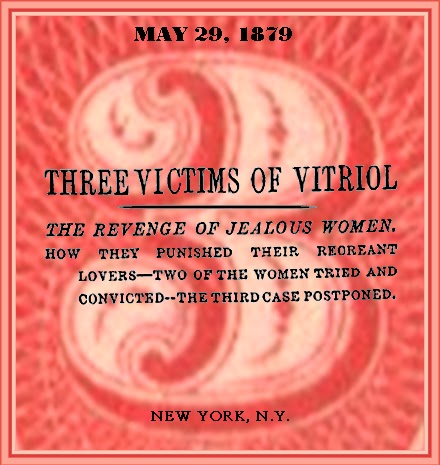 FULL TEXT (Article 1 of 2): Vitriol throwing is becoming one of the fine arts. It is generally practiced by maidens who have been discarded by their lovers, and the victim is always either the aforesaid lover or the girl who ultimately succeeded in winning his affections. It will be the proper thing to establish in every female boarding school a chair of vitriol practice, and proficiency in the art will entitle the miss to the highest honors of graduation.

***
FULL TEXT (Article 2 of 2): Three men with bandaged heads and horribly mutilated features sat among the witnesses in the General Sessions Court yesterday. They were the victims of recent cases of vitriol-throwing by jealous women. One was John McEnerny, a musician, of No. 419 East Forty-third-street, who had vitriol thrown on him at No. 303 East Forty-eighth-street. McEnerny, as alleged, compassed the ruin of a girl under promise of marriage. She sued him civilly, and obtained judgment of $500, but failed to collect it. Her betrayer, as alleged, taunted her with her failure to hold him responsible for his acts, and, infuriated by his conduct, she watched him leaving a ball-room, and threw vitriol in his face, destroying one eye completely and burning his head and face in a shocking manner. On being arraigned some days since Ellen pleaded guilty, and yesterday she was called up by Assistant District Attorney Bell for sentence. Her counsel pleaded for leniency on the grounds that she had suffered wrongs at the hands of McEnerny which rendered her action excusable. If she had shot him, he said, he should have no hesitation in asking the jury for an acquittal. Judge Cowing said that while he entertained great sympathy for the prisoner he could not forget that she had no right to take the law into her own hands. The law of the present day did not demand “an eye for an eye and a tooth for a tooth,” but had provided other means for the redress of grievances. Vitriol-throwing had become alarmingly prevalent since the prisoner had committed the act of which, on her own conviction, stood guilty, and his duty to society demanded that he should impose a penalty as would check the commission of such terrible crimes. He would, therefore, sentence her to five years in the Penitentiary. On hearing the sentence, Miss Mead, addressing Judge Cowing said: “I am much obliged to your Honor for your lenient sentence, but you might as well send me up for life.” On reaching the corridor, on her way to the Tombs, she said, alluding to McEnerny, “The scoundrel, if I had him now I would cut her heart out.” All the way to the prison she wept and called down the curses of heaven on her betrayer.

The second of the mutilated men was Bernard O’Neill, a peddler, at whom Mary Chinnerny, his reputed fiancée, threw vitriol a few days since, blinding one eye and injuring the other. Mary, who is a young woman of rather pleasing appearance, pleaded not guilty, and, on motion of her counsel, her trial was postponed for a few days.

Joseph W. Taylor, the third victim of vitriol-throwing, was then called to the witness stand by Mr. Bell, and the prisoner, Kate MacDonald, was brought to the bar. Her appearance caused a decided sensation in court. She had discarded the rich costume in which she appeared in court a week ago, and she wore a dark-colored wrapper, trimmed with red, and no other outer garment whatever. She wore no head-covering, and her long, black hair fell in disheveled masses over her shoulders. A pair of gold ear-rings and a lace ruffle at the throat were her only ornaments. Her eyes glared wildly, and as she strode with unsteady step toward the bar it was evident that her manner was not that of a person of sound mind. It was speedily announced that the defence would be insanity, and the actions of the prisoner gave color to the theory put forth by the defence. In the witness-box, were seated several at Miss McDonald’s female friends, while the complaintant’s family was represented by his father, a clergyman, living at Lawrenceville, Tioga County, Penn., his sister, and his wife, in revenge for marrying whom the infuriated girl, to whom it is claimed he was engaged to be married, has so horribly disfigured him. The circumstances of the case, as told by the complaintant, Taylor, who appeared nervous and excited, are, briefly, as follows: He became acquainted with Kate MacDonald, who was housekeeper at the Astor-Place Hotel, while boarding in that house last Fall. He left the house on April 17, and called to see Miss MacDonald, in response to her invitation, on the evening of the 10th last. She asked him to have supper, but he declined. She had sent him some money while he was out of employment, and he, feeling rather “cheap” at not having been able to repay her, asked if she could wait until the next month, as he had many other debts to pay. She replied that she was in no need of the money, and told him he could pay it when he found himself able. Just then a laundress entered the room and spoke to him, and Kate left for a few minutes. On returning she carried two vessels in her hands, but witness supposed they contained refreshments and had no reason to suspect anything wrong. After the laundress had left the room Kate arose to walk toward the bed, but suddenly turned and threw something at him. The fluid burned his eyes and forehead, and he ran into the wash-room and bathed himself. He then groped his way to the office of Dr. Franklin Smith, No. 185 Grand-street, who dressed his head and ordered him to the Chambers-street hospital.

On cross-examination, Taylor said he had been an organist in the Alanson Methodist Church and in a Presbyterean Church, and subsequently obtained employment as gateman on the New-York Elevated Railroad; he now lived at No. 30 Suffolk-street with his wife; he admitted getting money from the prisoner during his idleness, and also admitted that he had been intimate with her, but denied he had ever promised to marry her.

Mr. Mackinley, for the defense, called Ezra Haskell, proprietor of the Astor-Place Hotel, who testified that after Taylor had left the hotel Kate, who had previously been an excellent housekeeper, became morose and careless in the performance of her duties. Dr. Sheppard testified that he was called in to attend Kate on the night Taylor left the hotel, and found her suffering from hysterical epilepsy; he considered her insane then and thought she was of unsound mind now.

The prisoner herself then took the witness-stand and, with apparent truthfulness, testified that when she heard of Taylor’s marriage she became frenzied, and knew nothing whatever of what occurred subsequently: she had no knowledge of procuring vitriol or throwing it at her former lover. Assistant District Attorney Bell cross-examined her, but failed to shake her statements.

This closed the evidence, and Judge Cowing submitted the case to the jury in a concise charge. After an hour’s absence the jury returned, and as they filed into their seats the prisoner scanned their faces closely, and for their first time during the trial seemed perfectly rational and cognizant of her position. The jury found her guilty of assault and battery, and showing that although merciful in their verdict, they had disregarded the defense of insanity. The indictment, as in the case of Ellen Mead, charged felonious assault with intent to kill. Judge Cowing said that the jury had been very merciful to her, and sentenced her to the full penalty under the verdict – one year in the Penitentiary. “I am satisfied,” said Kate, as she bowed her acknowledgments and shook hands with her lawyer. She was warmly congratulated by her female friends, with whom she chatted gaily, in marked contrast with her demeanor during the progress of the trial. “Come Kate,” said one of the court attendants as he took her by the arm to load her to the Tombs, “tie up your hair now; you have played it well.”

[“Three Victims of Vitriol – The Revenge of Jealous Women. – How They Punished Their Recreant Lovers – Two of the Women Tried and Convicted – The Third Case Postponed.” New York Times (N.Y.), May 29, 1879]