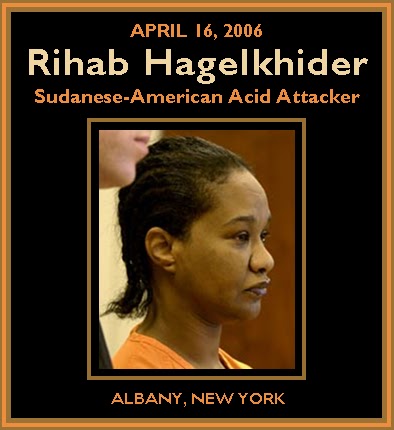 FULL TEXT: A 39-year-old Albany woman has been arrested after crashing a private party early this morning and splashing 3 female partygoers from Albany with an unknown acidic substance that injured them, the woman, and 2 firefighters who were treating them.


The assault occurred at about 3:30 a.m. at the Friendship House at 955 State Street during a party attended by about 200 people. Rihab Hagelkhider, of 25 Lark Street, entered the party uninvited and carrying an acidic substance. Hagelkhider apparently went to the party looking for 29-year-old Hayfa Hussein. When Hagelkhider found Hussein, she threw a substance at her that burned Hussein’s face and body. The substance also splashed and burned 36-year-old Hala Hussein, 30-year-old Kimberly Neeley, and Hagelkhider. While treating the 4 women at the scene, Schenectady Fire Department paramedics Darren Marino and David Mannix sustained burns to their hands when the latex gloves they were wearing were melted by the substance. All of the victims were treated at area hospitals and released.

A witness told police officers that the attack stemmed from an incident in Albany on Thursday in which Hagelkhider was arrested for felony Criminal Mischief after smashing a car windshield with a brick.

***
Was convicted and sentenced on January 4, 2007 by Schenectady County Court judge Richard Giardino to six years in prison.