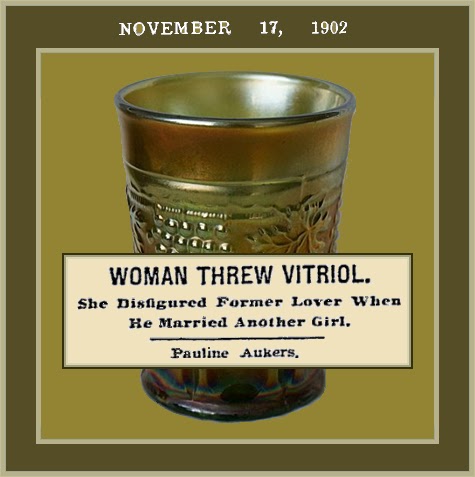 FULL TEXT:  Greensburg, Pa., November 17. – Saturday George Loughner, a clerk in the postoffice here, and Miss Pear Lucas, of Ludwick, eloped to Steubenville, where they were married, returning home last evening. This morning while Loughner was on his way to the postoffice he was met on Penn avenue by a girl named Pauline Aukers, whose home is in Latrobe, but who has been working as a domestic here.

She stopped him and said, “You were married?” He said, “Yes, on Saturday.” “Well, you have made my life miserable and I will give you what you deserve.” And with this she dashed a tumbler full of vitriol in his face and ran away. With yells of pain he hurried to a doctor’s office, where it was found none of it went into his eyes, but burned the left side of his face and neck badly. She claims that he promised to marry her, and this was the reason for doing what she did. She was arrested and is now in jail. She has been carrying a revolver to shoot him, but concluded the vitriol was the best punishment for him.