Sarah Harris, New York Man-Stalker Disfigured the Man Who Did Not Want to Marry Her - 1896 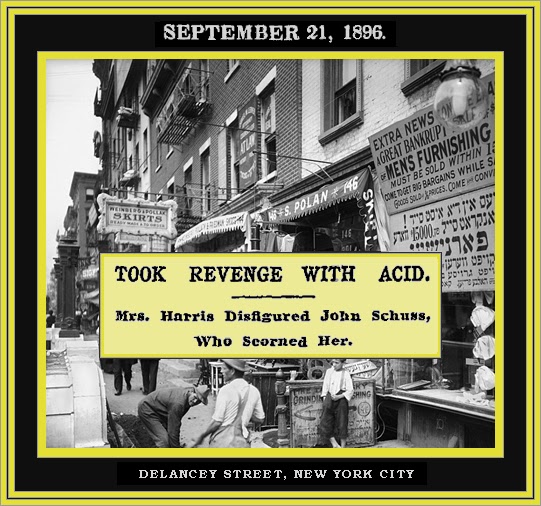 FULL TEXT: Mrs. Sarah Harris of 1,909 Second Avenue yesterday threw a bottle of carbolic acid over John Schuss, an elevated railroad guard, at his home, 225 Delancey Street, and also over his mother, because Schuss refused to marry her. Fortunately for Mr. and Mrs. Schuss, the acid was diluted, but it was strong enough to burn their faces painfully.

Schuss formerly boarded with Mrs. Harris. Her husband obtained a divorce, and the court sent her four children to an institution. Since then Mrs. Harris has wanted to marry Schuss, but he declined, and left the house. She has lately haunted his present home, and yesterday forced her way into his apartments and pleaded with him to marry her. He again refused, and she threw the acid in his face and some of it went over his mother.

Mrs. Harris said it was vitriol and she was glad she had disfigured him. She was arrested, and the Essex Market Police Court she was held for a further hearing.