The Earliest Known Ransom Child Kidnapping in the US Was Committed by a Woman: 1819 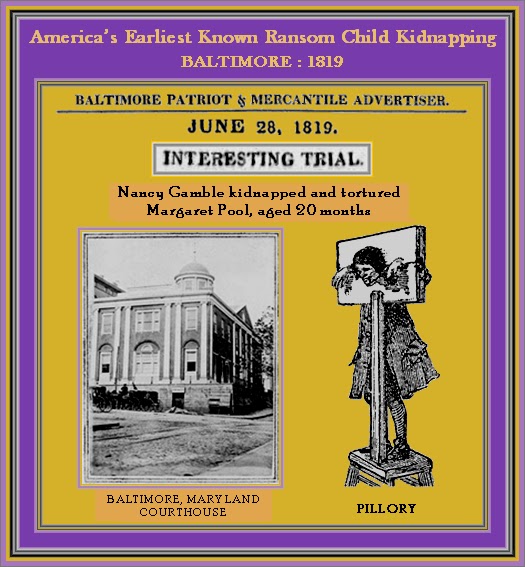 FULL TEXT: At the city court of Baltimore, during its present June session, NANCY GAMBLE, an interesting looking woman of 19 years of age, was indicted and tried for kidnapping, stealing, and conveying away an infant female child of the name of Margaret Pool, aged 20 months, the daughter of James and Mary Pool.

On the trial, Mary Pool, the mother of the child, testified that on Thursday the 20th May last, about 8 o’clock in the morning, the little child, who had just begun to run about, was playing on the pavement in front of her door, and being engaged within the house about 15 minutes, she left the child, and on her return it had disappeared – that immediate search was made for it without success – the neighborhood was roused in quest of the child; but nothing could be certainly ascertained by her until the Sunday after (23rd) when the child was brought back most dreadfully whipped and mangled, from its little neck to its feet.

The child was produced in Court with the marks of the rod still upon it – a sweet, interesting, beautiful, sprightly child of 18 or 20 months of age.

Gen. Heath testified, that having heard of the loss of the child, he went with others in pursuit of it, that after many fruitless enquiries he at length heard it had been seen on the road, and accordingly took that direction in search of it, along with Mr. Alexander Russell, That at Mr. Henworth’s they were told that the traverser dined there on Thursday with the child, which she represented as her own – called herself Mrs. Williams, and said she and her husband had quarreled about leaving the child with her grandmother in Baltimore, or putting the child out to nurse, and pretended to nurse it herself before the family – that she left there soon after dinner, and went on to Craig’s Ferry, where she said the child was her sister’s, and staid that night with the child. The next morning she took the stage towards , was put down a short distance this side of Mrs. Gamble’s (her aunt) and carefully avoiding the house of her aunt, had gone round through the woods to Mr. Pomfrey’s near Maguthy. Here she was found by Gen. Heath, Mr. Russel, and others, at 10 o’clock on Saurday night, in bed with Miss Pomfrey, who had taken off the child’s clothes to wash.  The child, when found, was in the arms of the woman lying in bed with the traverser. Gen. Heath accosted Miss P (supposing her to be the other woman) roughly, who denied the crime and charged it upon her companion in bed (the traverser,) who confessed the whole truth without any threats or flattery, fear of punishment, or hope of reward – the traverser stated to her pursuers that she had taken the child from the street in front of a house on Charles street, which she described agreeably to the situation of Mrs. Pool’s; that she took it up Pratt street to a Mrs. Hamilton’s, neat the Kegg Tavern, where she left it a short time in the care of a little girl, until she would fetch a bundle of clothes from near the Seminary; that on her return she took the child and brought it on the Annapolis road, in the manner above mentioned. On being closely questioned as to her motive, she said that her real object was to obtain the reward which would probably be offered for bringing the child back, Gen. Heath said, than on examining the child, they found it most cruelly and inhumanely whipped, lacerated, and bruised, so that in many places the blood had gushed through the skin. That on enquiry how this had come, the traverser confessed she had whipped the poor little innocent because it would not walk to keep pace with her; that its little arms and body  were so mangled, as literally to draw tears from several men then present, especially a Mr. Stone, who shed tears freely, and clasped it in his arms. That the traverser’s character in that neighborhood was very bad indeed. She had been abandoned by her aunt as worthless, and her reputation generally very depraved. 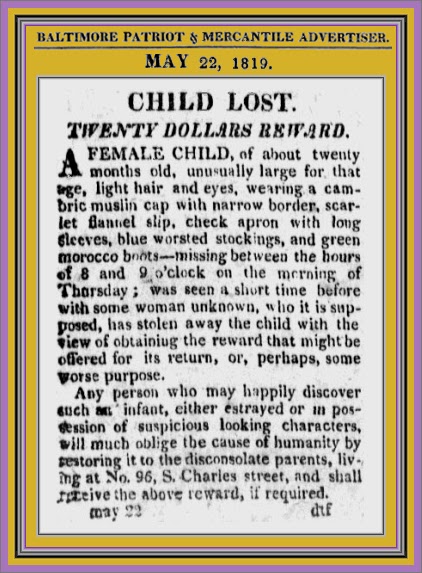 Mr. Alexander Russel confirmed Gen. Heath’s testimony throughout. Mr. Hensworth, Mr. Craig, and Mr. Cook, respectively as to the traverser’s possession of the child at their several houses; and to Mr. Cook she confessed she had whipped it severely  because it would not walk, as she was too heavy laden with clothes to carry it; and once she had whipped it because it would not keep in the right road. Dr. Handy also spoke of the wounds on the infant’s body, and said they were evidently inflicted at different times.

The defence, insanity – Two witnesses, Mrs. Farrell and Mr. Thomas both testified they considered the traverser but little above an idiot – with Mr. Thomas she had lived six weeks, a nurse to his child, and had been turned away by Mrs. Thomas on that account – that she would often lie without any motive, and disobey Mrs. T’s orders; although Mr. T. had no doubt that she perfectly understood her own property as distinct from that of others. Mr. Farrell had only seen her at his house part of a day prior to her going into the service of Mr. Thomas, and occasionally while she lived with Mr. T. but concurred in the same opinion. There was also some evidence of a general reputation in the neighborhood where she had been bred up to that effect.

On the contrary – General Heath and Mr. Russel testified that she was remarkably smart and subtle, sagacious and intelligent, and mentioned several proofs of it that had occurred on the road back to .  Their testimony was supported by Mr. Aguiton, the Swedish Consul (who rode in the stage with the traverser from Craig’s Ferry to where she left the stage) and by Mr. Cook, who had always lived in her neighborhood, had never heard such a suggestion before, but knew that her character and disposition were always so bad, that school masters had turned her away lest she should spoil the other children at school; and her aunt had driven her out of the house. Their testimony on this point was also corroborated by other witnesses.

The Counsel for the traverser prayed the court to instruct the Jury that the offence proved was not kidnapping at common law, upon which alone the indictment was founded; that kidnapping was the forcible abduction of – free persons from their own into a foreign country according to 4 Bla Com. 219 – (So decided by the court).

On the part of the State it was answered, That kidnapping was not strictly a technical term, and not an essential word to any indictment at common law – that its proper impact in common parlance was, according to etymology, child stealing, referring to Johnson’s Dictionary; that Mr. Justice Blackstone was not supported in his definition by the cases he had cited, nor by any other case or precedent, or elementary writer – that East had given a broader and more correct definition and description of the offence so as to embrace this case, and at all events rejecting the work kidnap as tautologous; there was sufficient matter still left in the indictment to constitute one of the highest misdemeanours at common law. This direction having been given, the evidence was then submitted to the Jury, (the Counsel for the traverser, admitting that if they should believe her guilt) and the Jury accordingly, without leaving their box, found her guilty
Counsel for the state, Eichelberger and Mitchell.
Counsel for the traverser, Hall and Kennedy.
There were also other indictments against the traverser, one for the inhuman battery of the child, and the other for stealing its clothes; on the first of which was found guilty, and from the other acquitted. It did not appear that she had stolen the child for the sake of its clothes, or that she had deprived it of its clothes, without intending to return them.

Marie Thomas, who had been aiding Nancy Gamble, was also found guilty on an indictment for kidnapping.

Yesterday the court passed sentence on each of the women, that they should, on the first Wednesday (the 7th) of July and the succeeding Wednesday (the 14th) stand one hour each day in the pillory, to be erected in the jail yard; be imprisoned twelve months, and until security be given for their good behavior in 500 dollars.