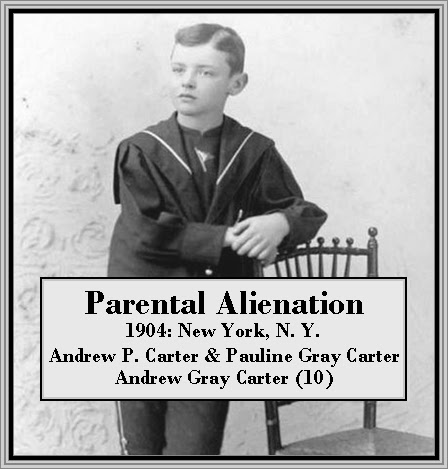 FULL TEXT: Andrew Gray Carter, the ten-year-old son of Andrew P. Carter, and his wife, Pauline Gray Carter, was produced in the Supreme Court yesterday in obedience to a writ of habeas corpus issued by Justice Leventritt applied for by counsel for the mother, who contended that her son was being kept from her by the father.

When the boy was brought into court Mrs. Carter asked permission to talk with him. Permission was granted. As the mother approached the boy drew away from her and clinched his fist. Mrs. Carter retired to the rear of the courtroom crying.

In 1901 Mrs. Carter obtained a divorce from her husband in South Dakota. Under this decree Mr. Carter was permitted to see the child at stated intervals. It is declared by Mrs. Carter that on one of these occasions Mr. Carter took the child and removed him to Sweet-water Tenn., where he has been at a boarding school. Mrs. Carter alleges that it was at the instigation of her husband that she removed to South Dakota to obtain her divorce. By advice of counsel she has now begun a suit for divorce in this State, naming several co-respondents.

As an offset to the new divorce action. Mr. Carter brings a counter suit for divorce, and names Preston Harrison, brother of the Mayor of Chicago, and Colonel Albert A. Pope, president of the Pope Manufacturing Company, as correspondents. Mrs. Carter declares that these two men are old friends of the family, and their calls were as much on her mother and brothers as on herself.

Justice Leventritt yesterday derided to appoint a referee to take testimony. In the mean time the boy is to remain in the custody of the father. If the parties can agree on an institution where the boy can be sent, and where they can both see him. The court will make such an order.

In argument yesterday counsel declared that Mr. Carter was immoral and unfit to have his son. He said Mr. Carter had given the boy a pistol and told him to kill his mother. Counsel said that the validity of the South Dakota decree of divorce had been attacked in the Tennessee courts, and that C. H. Rollins, of Boston, had refused to marry Mrs. Carter after the decree had been granted for fear it was not good.

Counsel for Mrs. Carter said that the reason the marriage of Mr. Rollins and Mrs. Carter did not take place was that they agreed to await the decision of the court in regard to the validity of the South Dakota divorce. He read a letter which Mr Rollins sent to Mrs. Carter while she was defending a suit brought by her husband in Tennessee, and in which Mr. Rollins was to be a witness. The letter says in part:

Now, sweetheart, why not come back to New-York, even if the case is not settled, instead of staying South, but be sure to send me your address wherever you are, to keep me posted. And now, darling, the boy is waiting to take this to the office: you shall have all my prayers for tomorrow, and you will be, as ever, dearest, in my mind. Be brave – all will come out well in the end.

In an affidavit Mr. Rollins denies all the charges against him. When he wrote the letter referred to he was engaged to Mrs. Carter, he declares. He says tho child never saw him kiss Mrs. Carter. In regard to his presence at Chattanooga the affidavit explains that for fear that “my name might be unfavorably dragged in the proceedings,” he determined to be present to refute any statement that might be made against him.

The affidavit says in ending that as soon as Mr. Rollins was informed that the validity of the South Dakota divorce was not recognized in the State of New-York: “I immediately ceased paying my attentions and cancelled my engagement of marriage to the plaintiff until the issues in this action have been decided, and when I did call I saw the plaintiff in the presence of her family or some one of them, as under the circumstances I considered her till the defendant’s wife, she having been advised by counsel to that effect.”