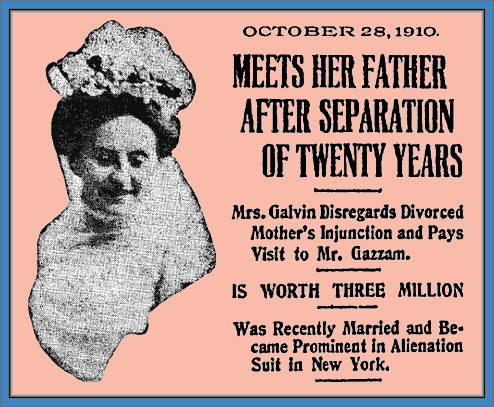 FULL TEXT: Philadelphia, Oct. 28. – After twenty years separation from her father in obedience to a clause in her mother’s will, Mrs. Chas. B. Galvin, of New York, formerly Miss Antoinette Elizabeth Gazzam with her new soul-mate husband, is to-day the happy guest in the home of her father, former state Senator Joseph M. Gazzam of this city, Mrs. Galvin is now 28 years old and had not seen her father who was divorced by Mrs. Galvin’s mother since she was eight. For more than a year she has been gradually weakening in her blind obedience to her brother’s injunction and a few months ago when Gazzam was injured in a fire, the daughter sent him flowers daily.

The recent marriage of the “heiress of Cornwall,” as Mrs. Galvin is known, served as the excuse for sweeping away the 20 year barrier and the reconciliation was complete in every way, father Gazzam even slapping on the back in joyous enthusiasm.

Mrs. Galvin is very wealthy having inherited $3,000,000 from the estate of her mother. She attained considerable notoriety last January when she was sued for $150,000 by Mrs. Marshall Clark of Chicago, whose husband was known as “Niblo the Palmist.” Mrs. Clark demanded $150,000 for the alienation of her husband’s affections and the suit was settled for $25,000.

Galvin before he married the heiress was a civil engineer employed by the New York Aqueduct commission.