A Woman's View of Men's Rights Activism in 1929 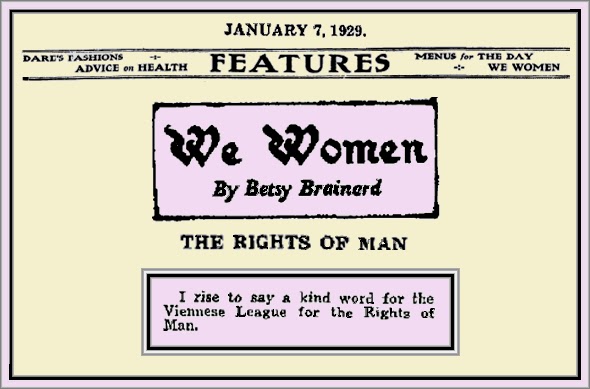 FULL TEXT: I rise to say a kind word for the Viennese League for the Rights of Man. [The correct name is, in German, Aequitas Weltbund für Männerrechte, which translates to "Aequitas World Federation for Men's Rights").

Under the auspices of this league an international congress for wronged husbands is about to take place in Vienna. Delegated from all civilized nations will participate.

They object will be to initiate a movement all over a world for combating the tyranny created by civilization by and in favor of women.

I think no honest and intelligent woman will object to that.

There is, I believe, injustice in the system which protects the wife against injury by her husband as though he were the only guilty party.

As Herr Hoeberth, president of the league says, “The institution of alimony for the wife who is either legally separated or divorced from her husband is the cause of most existing troubles.

“It encourages wives to become out-and-out adventuresses in quest of money whereby to satisfy their desire for a life of ease and luxury without a corresponding sacrifice being placed by matrimonial life on both parties. This institution, which everybody condemns but which no legislator seems to be courageous enough to tackle, should be abolished.

Men should find in divorce or in separation the same protection which women seek from brutal husbands.”

Herr Hoeberth’s language is a little vague as to the entire meaning but I do not assume that he wishes to abolish matrimony.

BUT THERE WAS NO DENYING THAT MAN IS OFTEN AT A DISADVANTAGE IN A MARRIAGE THAT HAS GONE “BLUEY.”

Wives, too, can be brutal and since men who have married unfortunately are frequently unable to help themselves, it seems to me that women ought to recognize the fact that MEN DO NOT ALWAYS GET A SQUARE DEAL and should do what they can to correct the situation.

At any rate, the purpose for which the congress in Vienna is to be held is not an academic one. It concerns a very real and universal problem. It merits discussion and publicity.

That is what women what and do get from the courts. It is what men should also get.

Betty Brainard will be glad to help her readers with their problems. Send a self-addressed stamped envelope to her in care of this paper.