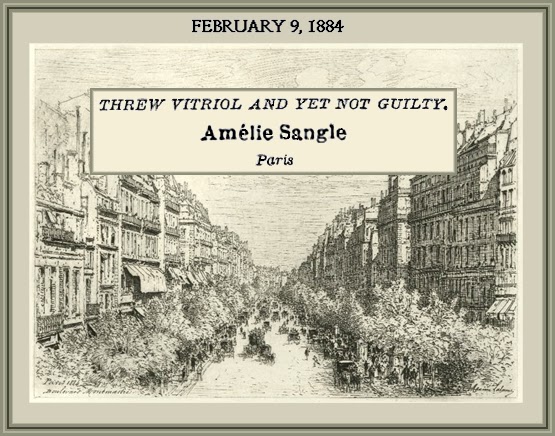 FULL TEXT: A curious case of vitriol-throwing was tried to-day. Amélie Sangle had married a young wood-turner last June, but had since separated from him. She afterward met one of her husband’s companions named Delinon, and asked him the former’s address, as she wished to return to him. Delinon refused to give it, whereupon Mme. Sangle bought a bottle of vitriol, and again urged him acquaint her where she could find her husband. On his still refusing she threw the contents of the bottle over them, covering his face with vitriol, and disfiguring his features in a horrible manner, causing him to lose both sight and hearing. At the trial to-day the woman avowed that she adored her husband, and, being jealous of Delinon’s influence over him, acted as she did in a fit of ungovernable rage. Notwithstanding the brutal character of the crime, the jury acquitted the prisoner.