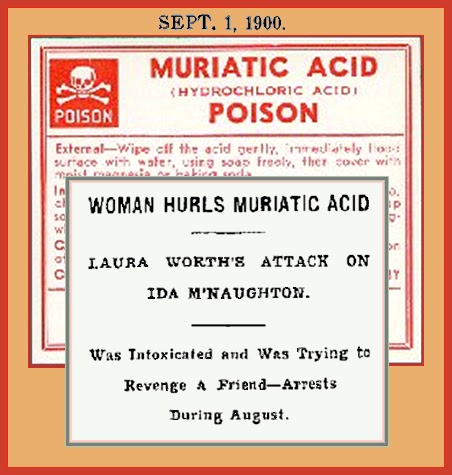 FULL TEXT: Flora Worth, an inmate of one of the local houses of ill fame, last night made a desperate effort to mark Ida McNaughton, a landlady on the flats. The Worth woman had indulged freely in liquor, and although she had not known the McNaughton woman, there was feeling between them on account of alleged remarks said to have been made. A woman friend of Flora Worth had some difficulty with Ida McNaughton and during her drunken spell these facts preyed on the Worth woman, who got possession of a glass of muriatic acid and called at the McNaughton house. The door was opened by Miss McNaughton and immediately the other woman hurled the glass of muriatic acid at the landlady's face.

She dodged and the acid struck her in the back, burning her waist considerably and making a mark on the shoulder. The police arrested Flora Worth and this morning she was fined $5 and costs by Mayor Scherer.