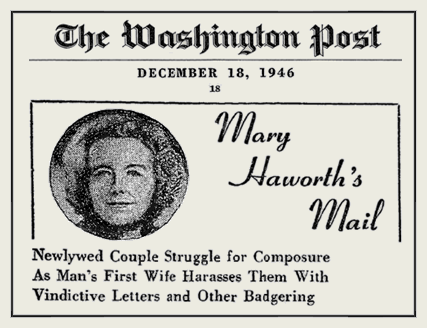 DEAR MARY HAYWORTH: I was married last summer to the best man in the world. We are very except for one thing, -- his former wife. He was married to her for 20 years and they have four children. I was married for 10 years previously and have a son, aged 5.

The reasons for our respective divorces probably won’t interest you; but I assure you they were valid and compelling. We had known each other for six years and had considered our problem from all angles before we married.

My husband loves his children, sees them often and gives half his income for their support, which I think is only fair. But I resent the fact that their mother is trying to poison their minds against him, and also trying to intrude in our married life.

She writes letters to my husband telling him that I have been seen out with others. Also, that his children will be “no good” because of what he has “done to them,” and other such statements. Last Sunday, when we were away, she came to our home with two of her children for a “visit.”

We live in a trailer park, where everyone knows everyone else. What a choice morsel for the neighbors! Not to mention the effects upon the children, had we been there. My husband says, “If she comes again, let her in, let her talk and say nothing. Treat it very casually.” But this kind of situation seems impossible to me.

The children would be welcome at any time, but I don’t think I should have to receive her here. My husband says she is simply trying to break up our marriage and the easiest way to thwart her is to let her see that her talk doesn’t bother us at all. We are expecting a baby in the spring and I am nervous and easily upset, I guess.

Believe me, we are deeply happy together and trust each other completely. Nothing like this will ever separate us: but what should I do if she comes again? A quick reply will be appreciated. B. P.

DEAR B. P.: In making a nuisance of herself as described, your husband’s former wife is parading the fact that she is a psychopathic character, who played a cat-and-mouse game with him for 20 years and is now more determined than ever to give him no peace.

Instead of roaming the streets or essaying the role of parent-guardian to her children, she ought to be in an institution – in protective custody, -- really. But the problem of how to manage psychopaths for their own and general good is one which medical science and the social planners haven’t begun to master yet.

Psychiatrists, trying to fathom their behavior, come up with the impression that psychopaths are just plain cussed, because when brought to test, they can pass muster as being sane enough to avert lunacy commitment. Furthermore, their misconduct usually takes the form of harassing and humiliating an especially vulnerable intimate, -- for instance, a husband, wife sweetheart, mild mannered parent, sister or brother.

~ Stoic Endurance The Only Armor. ~

IT HAS been said by one specialist, at least, that death in God’s own good time brings the only release from tribulation for either the psychopath or his selected victim. The latter must cling to the hardy philosophy, “What can’t be cured must be endured,” – a proverb which seems to sum up the conclusion your husband has reached, after 20 years of trying to make sense of his former wife.

Having elected to share his life, and finding yourself joint heir – in consequence – to this problem from out of his past, it seems to me the sensible thing to do is follow your husband’s experienced lead in trying to keep it under control.

If the woman succeeds in provoking a quarrel between you two, concerning defensive strategy, she will have scored heavily in her struggle to spoil the marriage. Thus, the best way to hold the fort against her is to ignore her onslaughts with Christian fortitude, -- never for a moment descending to her low level of vulgar contention. Such decent restraint on your husband’s part doubtless has kept his nature sweet.  M. H.