Parental Alienation Leads to the Suicide of Mary Sparks – California, 1917 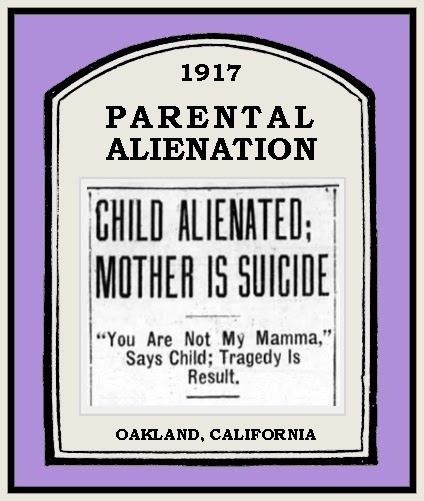 These words, alleged to have been taught her by her father, and uttered by the little daughter of Mrs. Marie Sparks, divorced wife of a local business man, were followed today by the woman’s suicide. Despondent over the divorce proceedings, and that fact that she was to have her child only six months or me year, the mother’s last desire to live was swept away when the child, returned from a visit to the father, renounced the other parent, according to the mother’s relatives. This morning she was taken to the receiving hospital in a dying condition, having swallowed poison. This afternoon she died.

The poison was, taken at the Harrison Apartment where Mrs. Sparks lived with her sister, Bella Mayfield.

According to what she would tell, when the physicians would allow her to talk, Mrs. Sparks was depressed and discouraged. Three weeks ago she came from San Francisco to stay temporarily with her sister. Before, she took the poison she wrote a letter to her daughter, who is in a school at Los Angeles, and one to Hal Miller, whole address in Oakland is not known.

Mrs. Mayfield declined to give any information to the hospital authorities concerning Mrs. Sparks.