Birdie Strome Murdered Her Stepdaughter (and perhaps 2 others) - 1925 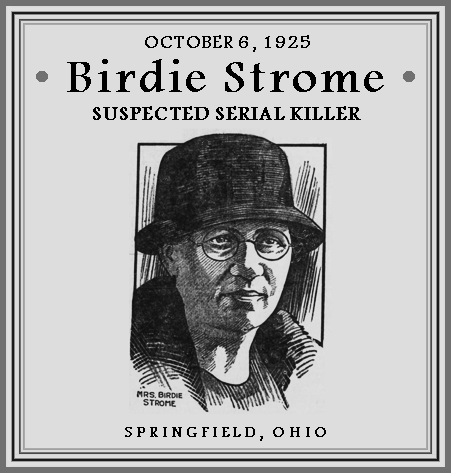 FULL TEXT (Article 1 of 6): Springfield, O., Oct. 7.—A woman was arrested and held for investigation Tuesday after Coroner Theodore E. Schaefer returned a verdict that Elsa Strome, 14, of New Carlisle, died from strychnine given her by an “unknown person.”

Coroner Schaefer, after an inquest, based his finding on the report of Dr. C. H. Reuter, pathologist of City hospital, who examined the child’s digestive tract and declared he found strychnine there.

Neighbors and members of the family also testified that the girl had had convulsions or “nervous fits” and that her body became rigid before she died. Other testimony given by Elsa’s stepmother, Mrs. Birdie Strome, was that her arm would stiffen up in front of her and that she moaned about pain in her legs.

The girl died Saturday [Oct. 3] under mysterious circumstances. It was said she had twice predicted she would die soon, once three weeks ago and the second time the day before her death.

The woman, who was taken into custody Tuesday, was apprehended by Sheriff Walter S. Lewis, under instructions of Prosecutor O. L. McKinney, who has been conducting a separate investigation. The woman collapsed when arrested.

Mrs. Strome, the stepmother, declared on the stand that Elsa was taken ill shortly after breakfast Saturday.

“She came downstairs singing like she always did every morning,” said Mrs. Strome, “and she seemed to be in the best of spirits. I didn’t notice anything wrong at all. I told her to clean up the table after breakfast while I cleaned up my bedroom. After finishing my bedroom, I noticed that Elsa had stopped singing and when I went into the dining room I looked into the kitchen to see what was keeping her so quiet.

“She was leaning against a table and crying. I helped her to a chair and she kept crying. 'Oh, my legs!' After she sat down her arms would become very straight and stiff in front of her and then again she would be quiet."

Mrs. Strome declared she called in neighbors and that a physician left some medicine and said the girl would recover in a short time. In a few minutes she died.

A post mortem examination Sunday had failed to show the cause of death and Coroner Schaefer asked Dr. Reuter to make a microscopic examination. Prosecutor McKinney began his investigation following Dr. Reuter’s report.

The girl was buried Tuesday. 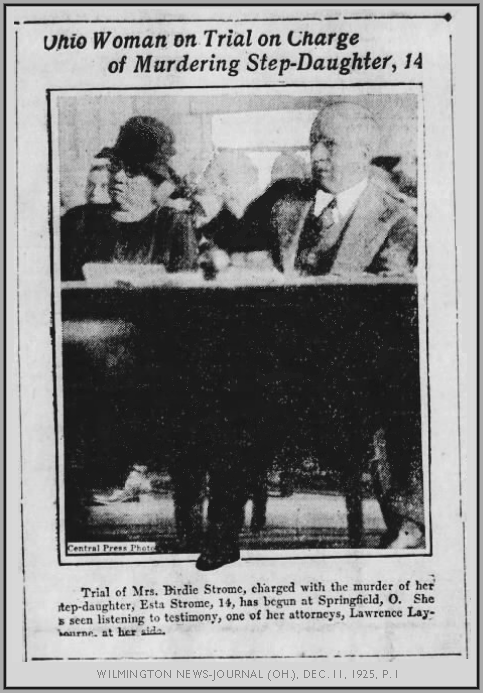 FULL TEXT (Article 2 of 6): Springfield, Oct. 7. – Exhumation of the bodies of George Frock, former husband of Mrs. Birdie Strome, and Frock’s sister-in-law Mrs. Mary Faulder both of whom died some years ago under mysterious circumstances is being contemplated by county officials who are investigating the sudden death Saturday at New Carlisle of Esta Strome, 14, step-daughter of Mrs. Strome.

Meanwhile Mrs. Strome, held in county jail “for investigation,” issued an informal statement in which she categorically asserted her innocence and forecast her release from custody. 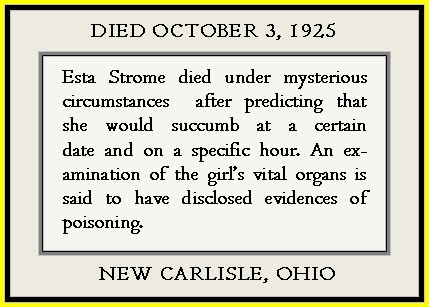 FULL TEXT (Article 3 of 6): New Carlisle, O.—A plea of not guilty was made by Mrs. Birdie Strome, 49 years old, of New Carlisle, when she was arraigned on an indictment charging first degree murder.

She is accused of having caused the death of her stepdaughter, Esta Strome, 14, by poisoning. Judge Krape, of common pleas court, fixed Dec. 1 as the date for Mrs. Strome’s trial.

Mrs. Strome was overcome by emotion twice as she was being led the short distance from her cell in the county jail adjoining the courthouse to the courtroom.

She swooned and virtually was carried into the courtroom by the sheriff and deputies. She was weeping audibly through the proceedings and moaned. “Oh, God, help me!” as the word murder was mentioned.

Mrs. Strome’s breakdown was in marked contrast to the calm demeanor she had maintained from the time of her arrest until her indictment. Esta Strome died under mysterious circumstances after predicting that she would succumb at a certain date and on a specific hour. An examination of the girl’s vital organs is said to have disclosed evidences of poisoning. 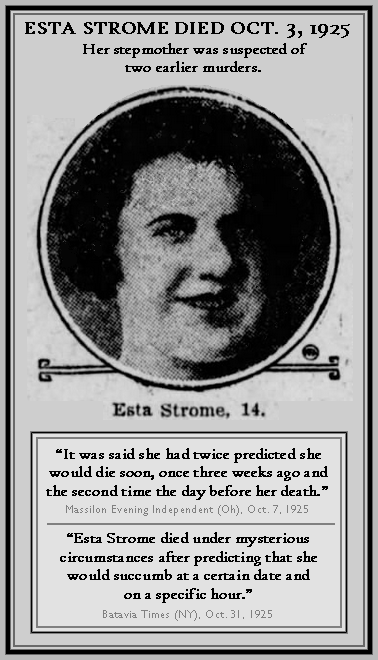 Defense counsel fought admission of the testimony tenaciously, claiming the death of Frock has no bearing on the death of Esta, who likewise, the state alleges, died from strychnine administered by Mrs. Strome in “bitter tea” which she forced Esta to drink.

Judge Frank M. Krapp overruled the defense, but cautioned the jury, declaring the testimony should be merely to show that Mrs. Strome might have known of the deadly properties of strychnine.

As adduction of testimony continued, the state was claiming victory in its fight to prove that Mrs. Strome poisoned Esta, because, of an intense hatred for the girl and because the child lavished a wealth of affection upon her father. Strome also testified, saying he married Mrs. Strome a year after Frock died. Chief of Detectives George Abele of Springfield, another witness, told of talking with Mrs. Strome on Oct. 6, about strychnine.

“She said she knew nothing about strychnine,” Abele said. Dr. W. A. Detrick, New; Carlisle physician, has testified he gave Mrs. Strome medicine containing strychnine last June, but that the woman did not know of the strychnine content. She was suffering from heart disease, he said.

Mrs. Strome, according to Abele, said she had used all the tablets prior to the period preceding Esta’s death.

As the trial wore on, the state, by adroit questioning of witnesses, brought out incidents in the life of Mrs. Strome.

David Baltzell, Dayton, testified his son, Harry, and Mrs. Strome visited his home in 1922. Harry Baltzell is now in the state penitentiary on a robbery charge.

“Mrs. Strome at that time was the widow of Frock,” Baltzell testified.

“Harry and she said they had been married.”

Baltzell said he came to Springfield and lived with his son and Mrs. Strome until 1923, when Harry was arrested.

Mrs. Cora Huelsman, also of Dayton, and a sister of Harry, testified she saw a telegram her brother received from Mrs. Strome the day Frock died, announcing his death.

She corroborated her father’s testimony regarding his visit to her brother and Mrs. Strome.

The state rested its case this afternoon. Judge Frank M. Krapp then adjourned court until tomorrow, when defense testimony will begin.

The state’s final witness – one of several who told of incidents in the past life of Mrs. Strome – was Arthur E. Smith, a Dayton druggist, who said he sold Harry Baltzell, Dayton, and now a convict, a quantity of strychnine.

Previous testimony brought out that Baltzell and Mrs. Strome were intimate and that at one time they informed Baltzell’s father, David Baltzell of Dayton, that they were married. 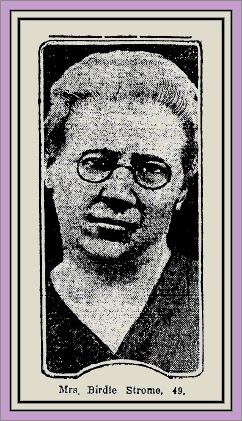 The woman, who, the state charged, killed Esta because of an intense hatred for her and because she stole the affections of her husband, Carey Strome, received the jury’s verdict which was returned at 9:40 o’clock last night; without show of emotion.

Counsel for Mrs. Strome announced today that a motion for a new trial will be filed Monday.

The jury deliberated eleven hours. Mrs. Strome was preparing to retire when she was called from her courtroom to hear the verdict. The jury recommended mercy.

After the brief ceremony, Mrs. Strome began discussing a fire which [could be seen through the window of the] courtroom, her only remark: “I don’t believe that was right, do you?” She was addressing the wife of the Stark-co sheriff.

Immediately therefore, Mrs. Strome began discussing a fire which was raging in the west end of the city, and which could be seen from the courtroom. Only a half-dozen spectators were in the courtroom when the verdict was read. Nine men and three women composed the jury.

The trial of the accused woman consumed nine days. Mrs. Strome was arrested and lodged in the county jail last October shortly after the mysterious death of Esta.

A coroner’s verdict held that strychnine caused the girl’s death and recommended Mrs. Strome be held.

Testimony brought out at the trial  revealed that Mrs. Strome’s first husband, George Frock, died under similar circumstances in 1922. Questioning of Henry Homer Baltzell, Dayton convict, and former intimate of Mrs. Strome, brought out that Baltzell gave the woman strychnine prior to Frock’s death. Defence attorneys, before Baltzell testified, had attempted to show that Mrs. Strome knew nothing of the deadly properties of strychnine.

Baltzell and several of his relatives also testified that Baltzell and Mrs. Strome occupied the same apartment following Frock’s death. Other testimony revealed that Mrs. Stromer had had anonymous letters written to her in which Esta was accused of saying “cruel things” about her.

Mrs. Strome married Strome two years ago after Baltzell was convicted of participating in a robbery and was confined in a state penitentiary.

Esta was 14, years old. She was in perfect health a few hours before her death, witnesses testified. Mrs. Strome gave her tea, which, the state contends, contained the strychnine.

FRONT PAGE (Article 6 of 6): Mrs. Birdie Strome, aged 60, serving a life sentence in the Reformatory at Marysville, died Monday at the instigation of heart disease. Mrs. Strome was sent here from Clark county, charged with the murder of her step-daughter, Elsa Strome. 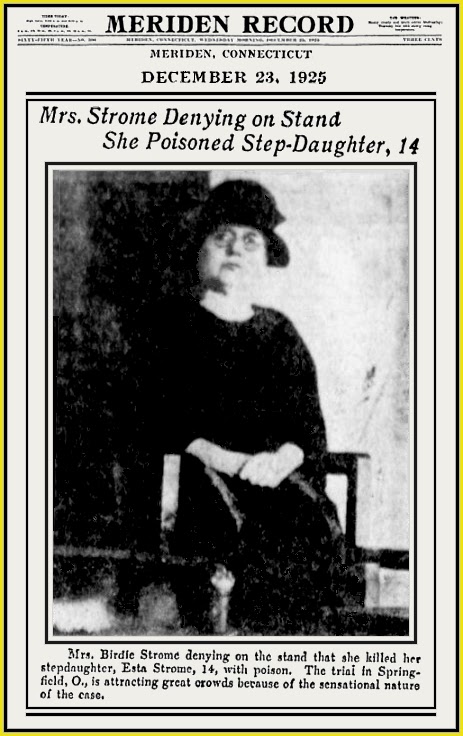 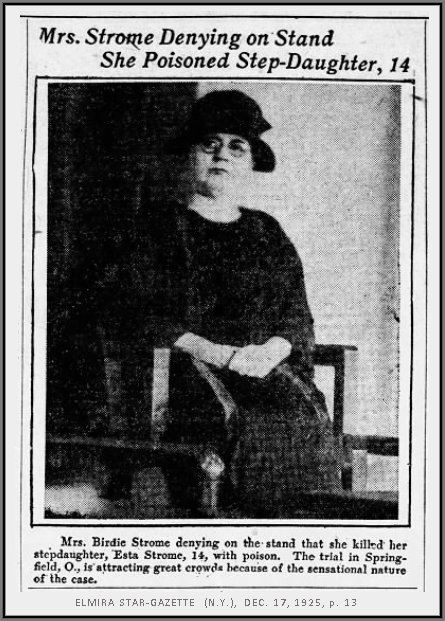 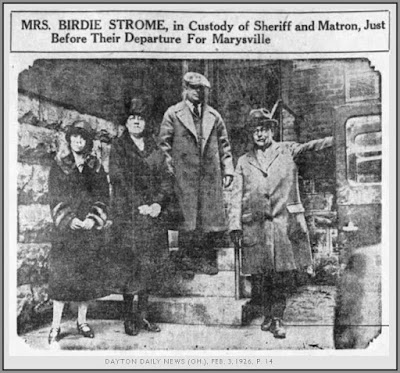 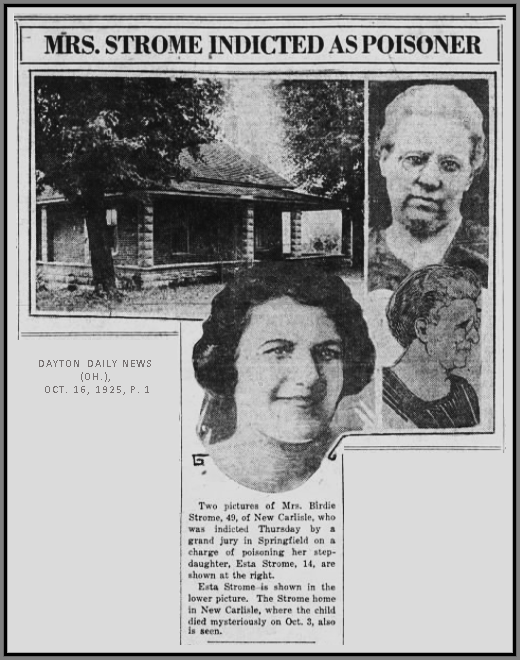 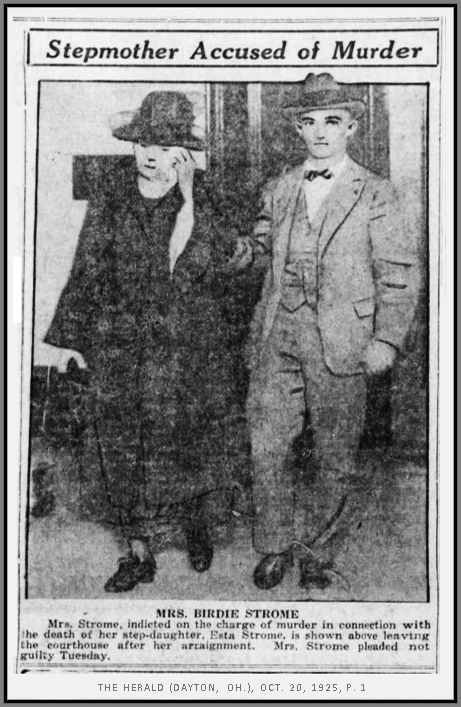 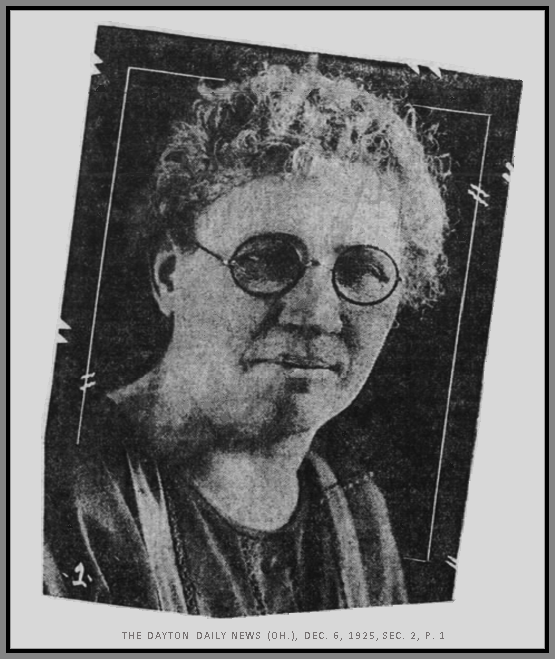 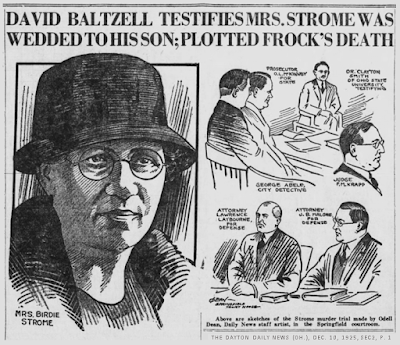 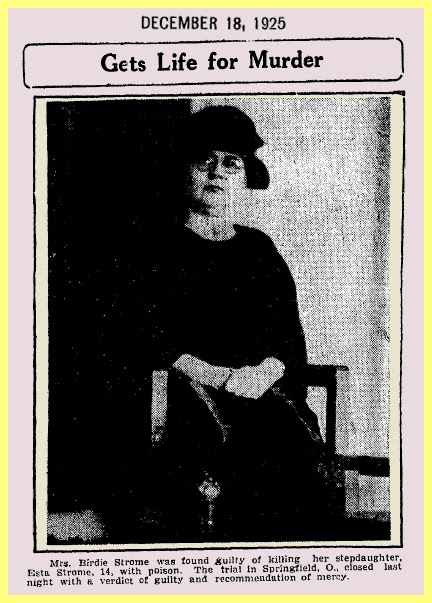