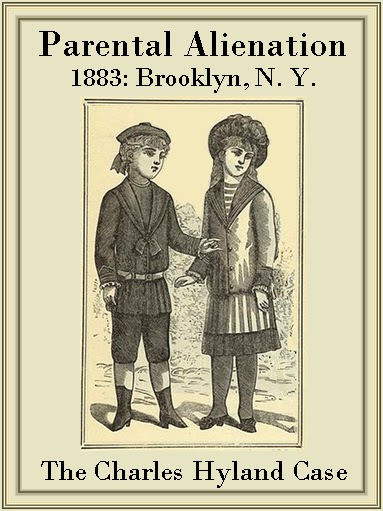 FULL TEXT: A few days ago Counsellor Baldwin F. Strauss obtained from Judge Reynolds, at Special Term of the City Court, a writ of habeas corpus, directing Charles Hyland to produce in court his two children, aged respectively 5 and 7 years. The writ was sued out on behalf of Mrs. Hyland, who says that she was married to Hyland on November 24, 1872, and that they lived together until the early part of 1881, when they separated without being divorced. Mrs. Hyland says that the cause of the separation was her husband’s brutal treatment. Several times, as alleged, he pulled handfuls of hair out of her head, and in midwinter threw her out into the street at 3 o’clock in the morning. On another occasion, as she alleges, she was in bed with her youngest child, her husband entered the room with a pitcher of ice cold water, and threw it down her back and over the child. Three weeks after the separation Hyland placed the two children in St. Malachi’s Home, in East New York, where they remained until July 31 last, when they were taken away. Mrs. Hyland further says that her husband secreted the children for the purpose of alienating their affections from her. She charges ner husband with being an improper person to have charge of the children, and alleges that he is at present living in open immorality.

This morning Hyland, accompanied by his attorney, Mr. Charles J. Patterson, was in the City Court. A lady accompanied him, having in charge the two children, in compliance with the writ, when they entered the room, Mrs. Hyland took them in her arms and kissed them several times, at the same time sobbing aloud. She is a respectable looking woman.

When the case was came by Judge Clement, Mr. Patterson produced the return to the writ. It stated that the parties were separated on July 12 last, and that Mrs. Hyland absented herself from home leaving the children on the street late every night. The return further states that at the time of the separation Mrs. Hyland was in the habit of becoming intoxicated, and was of a disreputable character, having been arrested several times for drunkenness and other offenses. Mr. Patterson said that she had been confined in the House of the Good Shepherd, and was, therefore, not a fit person to have charge of the children. Mr. Hyland was a respectable gentleman, having been employed for the past ten years by Dorion Schaffer, the oyster man of New York.

Mr. Strauss said that, to prevent litigation, he would discontinue the case if the father would give good security that tho mother would be allowed to see the children once a week. The children worn put in a Catholic Home, until the father took them to Jersey, where they are beyond the reach of their mother. He denied the allegations that Mrs. Hyland was a drunkard or a person of disreputable character. He thought that the children should be awarded to her.

The matter was adjourned for one week, in order to give Mr. Strauss a chance to get witnesses.