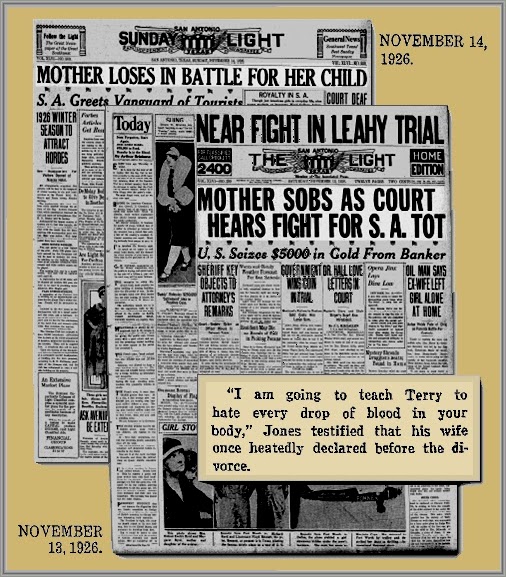 Historical research proves that the phenomenon of “Parental Alienation” did not first come to notice in the 1980s, but rather was a well-known problem that was addressed in child custody court cases as far back as the early 19th century. Nor does the claim that claims of parental alienation have been used by men more than women. The following is but one example from history.

FULL TEXT: Unable to restrain her tears and audible sobs, Mrs. Harry K. Greenlaw Saturday was led by her husband, Lieutenant Harry Greenlaw, from Ninety-fourth District Court, in which she is suing for the custody of her 9-year-old daughter, Terry Kennon Jones, before the testimony of her former husband, Elliot Jones, was given.

“I am going to teach Terry to hate every drop of blood in your body,” Jones testified that his wife  once heatedly declared before the divorce.

The witness followed this with statements that after they were divorced Mrs. Greenlaw on some occasions left, the child in the care of servants in their quarters over the garage. “When I remonstrated with her,” he said, “she hit me.”

During the Christmas holidays – of 1925 Mrs. Greenlaw left the child by herself nearly every night,” her former husband testified.

Mrs. Greenlaw threatened to kill Jones and “shoot up the works,” Jones Judge R. W. B. Terrell of Seventy-third District Court testified; “When I granted the custody of the child to Mrs. R. .S. Dillworth of Gonzales, September 14, 1925, because Mrs. Jones was unable to care for the child at the time.”

A deposition taken from Effie Guiton, negro crook, November 4, 1926, was read into the record. According to this document, before the couple was divorced Mrs. Greenlaw had parties during Mr. Jones’ absence and liquor was served. One night she left  the child with negro woman while the little girl had fever, it stated.

Terry Kennon, the little blue-eyed blond girl who is the center of this legal battle, Saturday, as on Friday, sat in the anteroom of the court. Unconcerned about the battle being waged over her, she amused herself with books.

Mrs. Greenlaw, .whose aviator-husband is stationed at Chanute Field. Ill., is seeking to have the custody of the child restored to her under the arrangement agreed upon at the time of the divorce. This order, which granted her the custody of Terry Kennon on week days, was superseded by a later order given by Judge Terrell, the author of the first one, giving the child to Mrs. Dillworth of Gonzales, a sister of Jones, it was in Judge Terrolls court that Mr. Greenlaw filed her suit to regain the child but the jurist disqualified him self and transferred it to the jurisdiction of Judge W. W. McCrory.