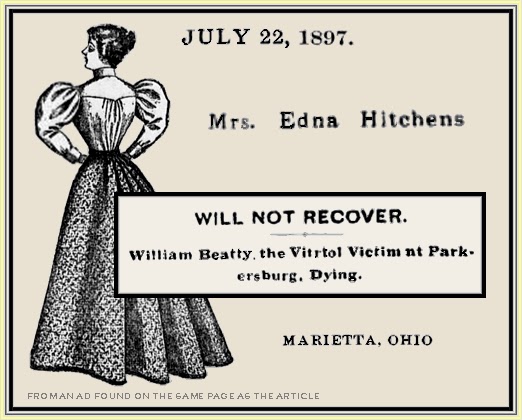 FULL TEXT: William A. Beatty, the victim of the wrath of Mrs. Edna Hitchens, who throw vitriol on him, is sinking rapidly. His physicians have given him up, and his death seems to be but a question of a few hour. He is unconscious and takes no nourishment. The death of the unfortunate man will be the climax of a crime, which, taking into consideration the developments since the vitriol assault, is one of the strangest ever recorded.

The story of the crime is so well known that but a brief recapitulation is necessary. On Saturday evening, July 3, Mr. Beatty, while going to bed, was attacked by the Hitchens woman. She threw vitriol over him, which struck him on the breast, abdomen and legs, She did not leave town for a day or two, and for some reason was not arrested. She has been at large since.