Eugenie Beaujean, French Acid Queen, Gloried In The Murder of Her Ex-Boyfriend - 1910 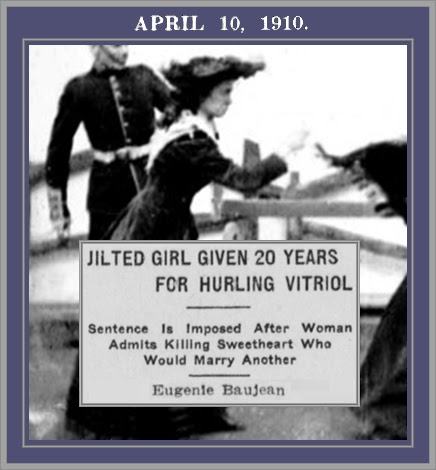 FULL TEXT: Paris, April 9. – A vitriol thrower named Eugenie Baujean has just been sentenced to twenty years’ penal servitude by the assize court at Auxerre. Her victim was a retired sergeant major of gendarmerie named Sarrasin. It was the old story of the crime passionel. The inevitable rupture occurred. Sarrasin had arranged to marry another woman.

His discarded sweetheart did not take kindly to the separation. There was a violent quarrel, and she left his house vowing that she would have her revenge. She was as good as her word.

A few days later she waylaid the officer and flung the contents of a bottle of vitriol in his face. The corrosive liquid burned him about the face, arms and throat, inflicting such injuries as to bring about his death two months later.

In the court the accused woman showed no contrition and gloried in her deed.