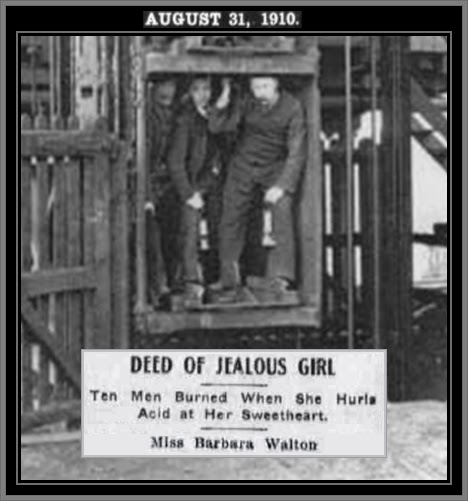 FULL TEXT: Wilkesbarre, Pa., Aug. 31. – Ten men were burned by carbolic acid when Miss Barbara Walton of Plymouth near here, made an effort to destroy the features of Thomas Price, a handsome young mine worker, of whom she was jealous, because he had, after paying attention to her, transferred his attention to another girl. Price was on the cage at the Dodson mine, about to be lowered to his work, and nine other men were with him, when Miss Walton, who had been hiding behind some timber started forward with a large bottle of carbolic acid in her land. She throw the contents at Price and he and the other men crowded into the center of the cage and, kept in by the closed gates, could not escape Price throw up his arm and partly shielded his face, but the acid burned his forehead and his lips and neck as well as his arm. John Urganis, who was behind him, was struck in the eyes, and his sight will probably be destroyed, The others were severely burned. The girl is held for hearing.