“Horror Tales of Men in General”: Parental Alienation in 1953 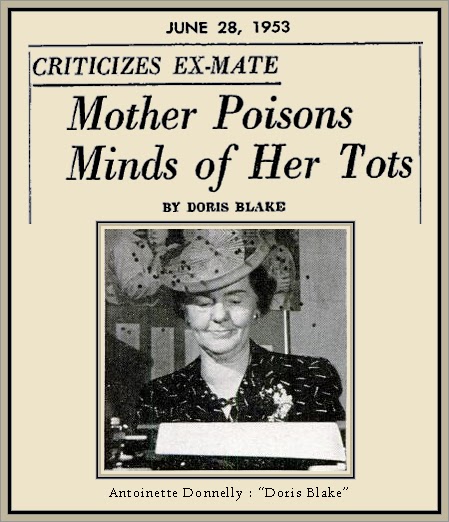 NOTE: This article provides an instructive description of a woman, embittered by her unsuccessful marriage, who uses financial security and her power to systematically indoctrinate her small daughter with a philosophy of misandry (with “horror tales of men in general”). A boy and girl are subjected to what in 1953 was referred to as both “alienating” and “poisoning the youngster’s mind. Such terms served to describe what today we call “parental alienation” long before 1953, however. Such terms were employed to describe this very phenomenon as far back as the nineteenth century. It is a great irony that today it is common for young girls to be aggressively indoctrinated, by a wide range of sources, with misandric collectivist philosophy while at the same time influential special-interest political groups falsely claim that parental alienation is merely a 1980s-era invention of males, or “big brutes” (a term used below).

FULL TEXT: “I do wish, Miss Blake, that you would address a few remarks to a relative of mine who was given custody of her two children at the time of her divorce.

“She is receiving alimony that  permits her to live comfortably, if not luxuriously. At least, she doesn’t have to worry about getting a job. What caused the divorce has its two sides, but I know the woman was spoiled and has her faults.

“So it is painful to watch what she is doing to her children in their relationship with their dad. It is obvious to everyone that he is crazy about his boy and girl.

“He tries to visit them on every possible occasion. But if she keeps on telling them what a heel their dad is and relaying to the young innocents what a horror he was to live with, she may succeed in alienating them from him entirely. That isn’t all.

“The little girl has been saying things about men being big brutes, etc., which never should be heard out of a child’s mouth. I call it poisoning the youngster’s mind.”

It is a known fact that after divorce conflicts hinging on this very visitation clause.

Experts say the mother with the children in her custody too often causes great unhappiness to the youngsters.

If the mother has custody of the children and the husband is going to see them in the home, it is up to that mother to make the situation as painless as possible. The children should be granted the indulgence of being permitted to continue loving their father. For this purpose there should be co-operation between the adults.

If resentment toward the father weighs heavily, the kindest thing the mother can do is to prepare them for his visit.

If the mother handles these visits sympathetic understanding and still carries a torch for her man, it is the surest was known to win him back.

It is a monstrous mother, indeed, who would corrupt a girl-child with horror tales in general. After all, where marriage fails, the mother has a share in the responsibility.