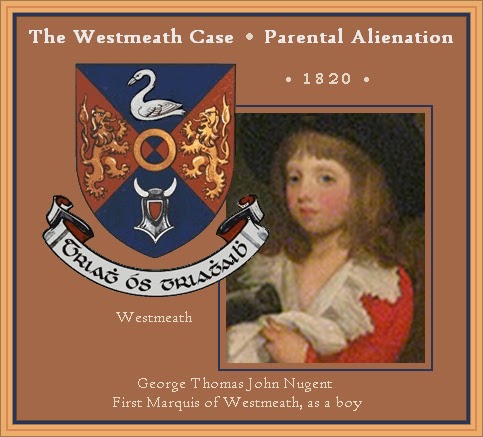 Excerpt from a description of the 1820 Westmeath vs. Westmeath case, London:

“George had become convinced that Emily had ‘used the utmost of her plausible talents to poison her infant mind against me.’ And so, on 12 March , the governess took Rosa over to her father’s house, he reused to let the child go. Emily immediately sought a writ of habeas corpus. The judge decided to override the standing written agreement on custody and awarded custody to the father on common law grounds.  Two days after taking possession of Rosa, George moved her to a country house belonging to a close friend and relative, the Duke of Buckingham and Chandos, at Avington in Berkshire, where she lived thereafter, with the Duke acting as her guardian. In order to ‘save the child from perdition.’ George instructed all around her never again to allow Emily to see or communicate with the child.” Subsequently the father succeeded in thoroughly poisoning the child’s mind against the mother.

On two occasions the Marchioness forced her way into her daughter’s new home. On the second occasion she succeeded in gaining an hour alone with Rose before being ejected. “Meanwhile Rosa, who was aged then about 11 years old, wept bitterly, but steadfastly refused to kiss her mother or even shake her hand, much less go home with her. Some fourteen years later Emily recollected that Rosa had said to her, ‘Papa and the Duke of Buckingham have pointed out what sort of woman you was. I never wish to see your face again.’”