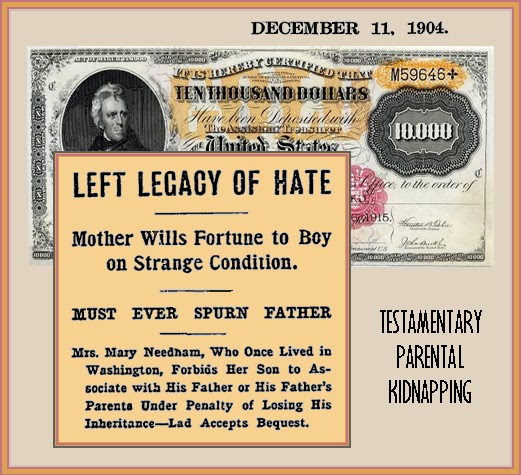 FULL TEXT: Cleveland, Ohio, Dec. 10 – Wills frequently reveal the skeleton in the family closet, but seldom have they done so with the thoroughness that characterizes the last testament of Mary B. Needham, who once lived in Washington with her husband. Mrs. Needham left a large fortune – a quarter of a million dollars – and left all of it to her ten-year-old son, but on a condition of a most startling character. This condition is that the boy must never associate with his father or his father’s parents. This legacy of hate received by the lad from his dead mother is the natural inheritance from many bitter years of her life. It tells a story of love turned to hate as the result of dissensions over money. One of the distressing features is that the boy receives this unnatural legacy gladly.

The clause of Mr. Needham’s will enforcing this strange provision follows that portion of the instrument which makes the young boy her sole heir. It reads:

If, however, the said Benjamin, after he arrives at sixteen years of age, should associate with or live with or be, with or without said Benjamin’s consent, as associate or friend of either Otis N. Needham or Fannie Maria Needham or Frederick F. Needham, whom I have good reason to know are improper and unsuitable persons for said Benjamin to be with, or be influenced by them, in that case, and my trustee shall be fully satisfied that said Benjamin Fridley shall voluntarily set my wishes, as above expressed, aside, then I direct my said trustee and his successors in trust to declare the foregoing bequest hereinabove provided for him as wholly forfeited, and in that case I declare that no part of said estate, except so far as the same as herein provided for his support, shall be delivered to said Benjamin.

Mrs. Needham was the divorced wife of Frederick F. Needham, who has since remarried and is now living in this city. Otis N. Needham and Fannie Maria Needham, whose names are mentioned in this will, are his father and mother. They are residents of this city and known through their connection with the Livingstone, which was once operated on the present site of the present Hotel Euclid. Frederick F. Needham, their son, was associated with them in this enterprise.

Mrs. Needham left her husband in 1897 and soon after obtained a divorce. She took up her residence in an apartment house in Dodge street, with her boy, Benjamin, or Fridley, as he was called by the family. She died August 5, 1902. The late W. C. McFarland was appointed trustee and guardian in accordance with the request of Mrs. Needham in her will. He has since died, and the boy is in charge of Miss McFarland, a sister of the attorney.

Frederick F. Needham began proceedings in the Probate Court to be appointed his guardian, claiming that right because he was the father. This request Judge White refused after a careful investigation into the history of the case, and Miss McFarland was made guardian of the youthful heir, while William G. Taylor was appointed trustee of the fortune. Miss McFarland lives at 60 Hough avenue, where the boy makes his home.

The skeleton of the Needham family has been frequently exhibited in the courts. Its exhibition came through the sensational litigation attending the divorce proceedings and subsequent civil actions brought to recover property which the family held. The several actions, although in a way connected, revealed only a. part of the story. The rigid rules of evidence would not permit a greater exhibition. But the complete story is spread
on papers in the handwriting on Mrs. Needham. carefully locked up in the safes of the attorneys concerned in the litigation.

It is a story of love and love turned to hate. The late Mrs. Mary B. Needham was talented and accomplished, but eccentric in many ways. She was the youngest of Judge Benjamin Franklin Fridley’s three daughters. The late judge was one of the foremost jurists in Illinois. He was wealthy, was at one time the law partner of Stephen A. Douglas, and served a term as governor of Illinois. The family home was at Aurora, Ill., when Mrs. Eliza Fridley, the widow of the judge, is still living. She is now eighty-seven years of age.

When a pupil in the high school of that city May Fridley. as she was called, met Frederick F. Needham. Her father and mother had moved to Aurora soon after the Chicago fire. Young Needham was a dashing youth and handsome. He won the heart of the girl in spite of the fact that the judge disapproved of the suit. The Fridley family held a high social position. May, although young, had shown an unusual aptitude for study and an inclination for books. She was the pride of the stern old judge, and he had determined that her marriage would be a brilliant alliance. He did not like Needham, in spite of his polished manners and fine appearance.

May completed her education in an Eastern college and became an accomplished musician and master of several languages. She was a brilliant conversationalist. One day the judge received a telegram from Denver informing him of the marriage of his daughter to Needham. The blow was a severe one to him, as he was growing old. He sternly refused to give the union his blessing.

Needham and his wife remained in Denver only a short time, and in the next few years lived in various cities. They came East and resided for a time at Warsaw, Fort Wayne, Spencer, and Indianapolis, in Indiana. Then they went to Washington. From the latter place the birth of a boy was announced. The judge then put behind him the resentment which he had held so many years and sent the child a liberal gift. Needham’s father took the Livingstone Hotel in 1895, and Frederick Needham came to this city to help him in the enterprise. But it failed to pay, and the sheriff assumed control.

Mrs. Needham and her husband had frequent quarrels over money matters, which finally led to their separation. Mrs. Needham bought the Victoria apartment house, as the death of her father had made her wealthy, and took up her residence there.

During all the years of her married life she had concealed from her father and mother all idea of her unhappiness. At times she was put to great straits to accomplish this, but the judge died without suspicion of the status of affairs. He loved the boy and in his will provided for his daughter liberally, because he was anxious that the little fellow should be well taken care of.

Her devotion to the boy was marked. She held before him at all times the honorable career of her father. Soon after her separation from her husband the child was kidnapped while out for an airing on Euclid avenue. She immediately called her former husband to the telephone and threatened him with arrest if the boy was not returned to her immediately. The boy was returned in a few hours.

The disposal of her petition for divorce gave him control of the child, who by this time had grown to be a particularly bright boy. He was idolized by his mother’s servants. On the death of his mother he was taken into the home of her attorney, Mr. McFarland, on whom his mother had relied so strongly during her life. He became one of the McFarland family. Mr. McFarland was taken from him and his cause was espoused by Miss McFarland.

When Frederick F. Needham attempted to gain possession of the boy, in spite of the will of Mrs. Needham, she went into court and fought for the child. At last Judge White refused to grant the petition of Needham. On hearing the verdict the little fellow fairly jumped for joy, and, clapping his hands, cried: “We’ve won; we’ve won!”

Although but ten years of age, he means to follow his mother’s hatred of Frederick Needham.

[“Left Legacy Of Hate - Mother Wills Fortune to Boy on Strange Condition. -  MUST Ever Spite Father - Mrs. Mary Needham, Who Once Lived in Washington, Forbids Her Son to Associate With His Father or His Father’s Parents Under Penalty of Losing His Inheritance—Lad Accepts Bequest.” The Washington Post (D.C.), Dec. 11, 1904, part 4, p. 1]